Tatra. Caves trapped in a cave. Rescuers widened the corridor 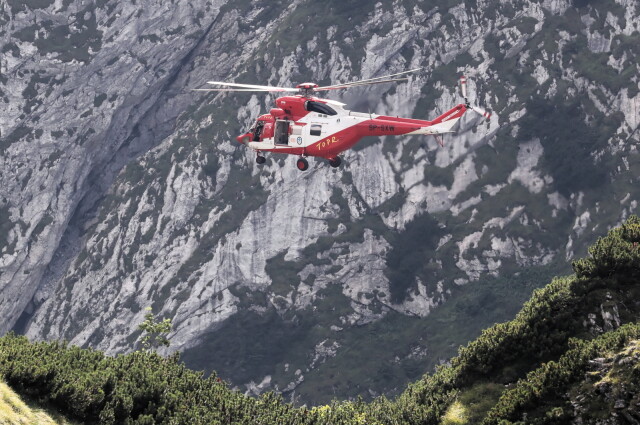 
Seven rescuers work in the cave

Rescuers working from Monday to Tuesday at night in the Great Snow Cave broadened the corridor with explosives. There was still no contact with the trapped speleologists. Tuesday is the fourth day of the rescue operation.

– If the ventilation does not worsen, I think we can go a few meters forward and see if any new useful information appears – said Jan Krzysztof, head of TOPR, at a meeting with journalists on Tuesday morning.

At night, the rescuers succeeded in using pyrotechnic materials again. – Currently I have incomplete information, because this team has not left yet, but the materials were used approximately every two hours – tells the mountaineer. He added that a significant part of Savior's work was taking boulders blocking the road.

– We want to reach the next meters as fast as possible. This is the key – stressed Krzysztof. During the night, the rescuers moved about 4 to 5 meters.

Due to the small space in the cave, the groups working inside are not numerous. Only one person can work on the "ancestor". Currently TOPR has 12 pyrotechnicians from Poland and Slovakia.

"The circulation has changed"

The use of pyrotechnic materials was discontinued on Monday due to the high concentration of carbon monoxide in the cave. The occurrence of gas is due to previously controlled explosions.

The gas concentration dropped during the night from Monday to Tuesday. – The edition has changed. The water level could have dropped and there was a flow of air, but this is just a pass – indicates the head of TOPR.

Because of this turnaround, the ventilation equipment that was transported to the cave area, have not yet been used. – More solutions will reach us, we will see if they are needed. Depending on the situation, we will introduce them – announced the climber. Jan Krzysztof also pointed out that the circulation in the cave can disappear as quickly as it appears.

– It should rain in the afternoon, water will appear in the cave. It should not be dangerous for rescuers, but it can slow down our work – said the head of TOPR. And he added: – The most important task for today is to go further in this direction.

There are currently seven people in the cave. Another group is about to go underground at noon. [194559]

WHAT WE KNOW ABOUT SAVING ACTIONS IN JASKINA. QUESTIONS AND ANSWERS >>>

Six speleologists entered the Great Snow Cave in the Tatras on Thursday. Two of them were cut off from the water that flooded part of the corridor in the so-called Przemkowy parts. They made contact with their comrades who notified the rescuers. There is so much water that the speleologists have no chance to go. You are in a rather remote group, about 500 meters below the cave entrance. The rescuers could not turn to her. [194559]

The longest and deepest cave in the Tatras

The Big Snow Cave is the longest and deepest cave in the Tatra Mountains. The length of its corridors is almost 24 km. Not all of them have been thoroughly investigated. It is a cave with complex, narrow passages and corridors that has several entrance holes.

One of the drivers should drive in the other direction first. They drove a section of the Wincentego Pola road and should come back …
read more »

Play:" Achieving the next meter is crucial ". Still no contact with speleologists

The extremely curious cow, which became famous as the entrance to the mansion's roof a few weeks ago, proved to be your favorite in …
read on »

Play: Deputy Minister should stand behind the hate of the judges Gowin: Such practices would be unacceptable.

If my official had to hate professors who oppose our government in this way, then …
read more »

On Monday, the weather in Poland was a threat, and in Biała Podlaska, heavy gusts of wind erupted into the trees during the storm.
read on »

Piece: The third day of action on Lake Kisajno. The search for the 39-year-old was continued

On Tuesday morning, the search for the film producer Piotr Woźniak-Starak at Lake Kisajno continued, …
read on »

The Institute of Meteorology and Water Management published first-degree warnings of hailstorms. On Tuesday and Wednesday …
»

The National Electoral Commission considers that the request of the car" prohibits "the use of the election committee of the Democratic Left Alliance. ..
read more »

On Monday evening, the Civic Coalition published a list of 73 candidates for the Senate in parliamentary elections. They realized …
read more »

Lubliniec. A school fire near Oblatach. The fire is bursting like crazy

Lessons have been shortened to 30 minutes. The Ministry of National Education is introducing NEW CHANGES to the way schools work [24.09.2020]

Coalition in crisis: Another meeting between Kaczyński and Ziobro