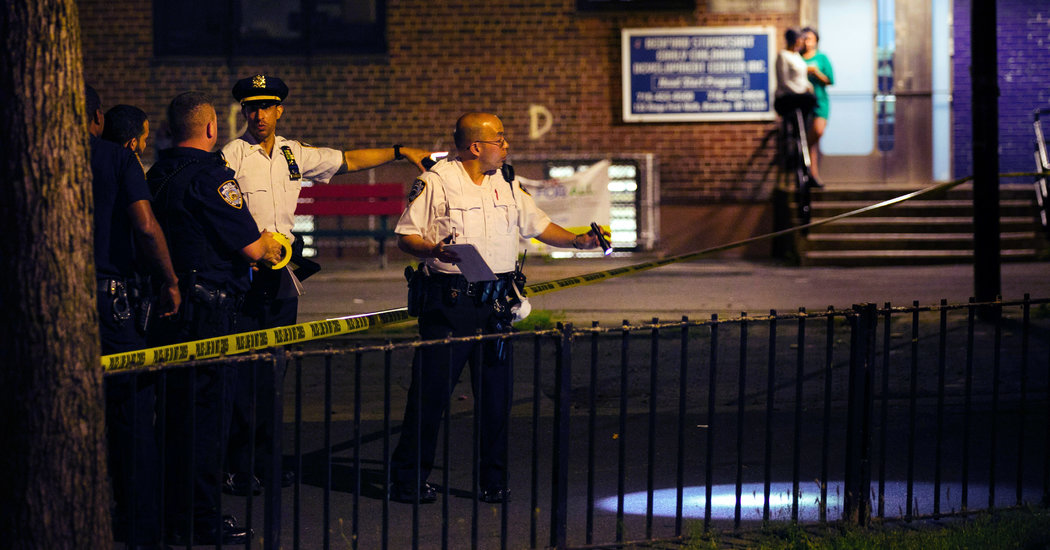 Officials who responded to a report of gunfire in a Brooklyn housing project on Tuesday found a man holding a gun at a tree in a dark street and shot him several times, killing him, the police said .

Police said the incident had nothing to do with the demonstrations and clashes between protesters and officials that continued to destroy the city on Tuesday evening after a white Minnesota police officer died after George Floyd’s death.

Police protests against Mr. Floyd’s death and other black deaths have exacerbated tensions between the police department and residents of predominantly black and Latin American neighborhoods such as the one where the shootout took place.

The officials responded to the Kingsborough Houses in the Crown Heights neighborhood after ShotSpotter sensors detected shots at around 9:26 p.m., the police said.

When the officers arrived, they were told that a man in his forties had been shot near the corner of Rochester Avenue and Bergen Street, the entrance to the housing project.

But the officers could not find the wounded immediately because he had crawled away from where he had been shot, a police officer said.

Witnesses told police that a man with a gun had run up the block, Chief Terence Monahan said at a press conference near the scene less than two hours after the incident. After a search, officials found the armed man, who they believed was the gunman hiding behind a tree on Bergen Street, the chief said.

The man, who was 34 years old, but whose name was not released, pointed his gun at the responding officials, the police said. For more than a minute, officials repeatedly ordered the man to throw his gun into an adrenaline-fueled standoff, the boss said.

Videos posted on Facebook and Twitter also showed numerous neighbors behind the officials and warned the man: “Drop the gun!”

Then there was a deafening burst of fire, the audio recording of which was made by a witness and distributed online. Chief Monahan said 10 officers shot the man. He didn’t immediately know they had fired many rounds or whether the man had fired his pistol. The shots were also recorded on the officers’ body cameras, the chief said.

“The male refused the officers’ orders, and the officers released their guns and beat him,” said Chief Monahan.

The man immediately collapsed and died before he could be taken to a hospital, Chief Monahan said. He showed a photo of the man’s gun, which the investigators believe was illegally obtained.

There was a pool of blood on the sidewalk after shooting near a bush patch.

The police said they don’t know what led to the first shots. The wounded man who crawled away was discovered nearby and taken to a hospital where he was in a stable condition, the police said. None of the officers were seriously injured, the police said.

Janet Howell, who lives on a block from the shooting scene, said she came out after half a dozen shots and saw the police carry a man to a patrol car.

“I only heard gunfire and then sirens,” she said. Mrs. Howell said the man appeared to have been shot in the shin; He limped, was supported by officers, and tied a tourniquet around his thigh.

Police later took the same man to a nearby ambulance, she said. At that point, the police called Ms. Howell to return to her home on Rochester Avenue, she recalled.

Roy Isaacs, who lives in the same building as Mrs. Howell, said he came outside after hearing gunshots and saw the same man with a leg wound on the floor in a courtyard of the housing development.

When the police ran south on Rochester Avenue, they shouted that Mr. Isaacs should come back in. “They said they were looking for the shooter,” said Isaacs.

Moments later he saw the officers squatting behind cars and trucks as if they were taking cover from a shootout, but said he hadn’t heard any more shots.

Another witness, who did not give his name because he was afraid for his safety, said he had seen officials trying to help the wounded just before the fire broke out.

Michael Schwirtz contributed to the reporting.