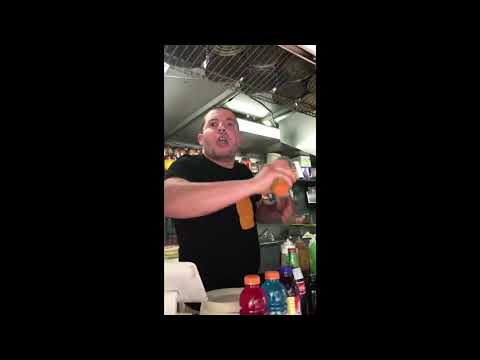 A Portland woman who called a food cart owner on Wednesday called her racist insults, tossed her a Gatorade bottle and doused her in Sriracha's spicy sauce as she paid with Lodging, says she's still struggling to accept what happened to her.

Carlotta Washington said she did not sleep until four o'clock Thursday morning because she was so shaken by the encounter in downtown Portland. She said she had been fighting anxiety and depression all her life.

1; I have to relive it in my mind," Washington told The Oregonian / OregonLive on Thursday, crying. "How could you treat someone like that?"

El Masry, 38, appeared Thursday in the district court of Multnomah over allegations of assault and harassment. He declined to comment later on Thursday.

The food cart was open Thursday. At some point in the afternoon, a passerby went to Paula Suazo, who worked alone in the house, expressing her disappointment at the incident. Suazo agreed.

Suazo described El Masry as a "hothead" to Oregonian / OregonLive, but said he was not a racist. She did not work when the meeting occurred, but she felt it important to keep the food cart open to discuss with customers what had happened and not to put up with what El Masry was accused of doing.

"I watched the video on the internet like everyone else, and it disgusted me," Suazo said. "There are always two sides to a story, but we value all of our customers, and I'm sorry that happened."

Washington, 47, said she left for a medical appointment on Wednesday and went to lunch with Small Pharaohs.

She said that El Masry had served her before, but had never been disrespectful to her before. She said she had felt him in the past as frustrated or rude, but he did not know the circumstances.

Washington ordered a lamb rice platter for $ 7. She had $ 3 in cash and knew she had at least another $ 5 in quarters.

When she counted the change in her hand, El Masry told her to hurry, she said. After continuing to press her for the money, Washington said she gave her all the money she had and thought he would count it by himself and give her the change.

When the change did not come, Washington asked the money back to count it correctly. El Masry pushed the coins back.

He then said he did not accept coins, Washington said, and when she repeatedly asked him why, he at least twice called her the N-word.

If not half of it "Nobody cared for him," Washington said. "He got more restless when he saw my phone."

The bottle of Gatorade El Masry threw the phone out of Washington's hands and punched her in the chest, she said. Then she knocked the other bottles of juice and soda on the counter

El Masry grabbed a bottle of spicy sauce and splashed it on her, slapping her face and clothes into her eyes, she said.

By then other people came over and helped her to wash her eyes and to put distance between herself and El Masry. She called the police.

Washington said she was angry at that moment, but has since felt hurt and embarrassed by the incident. She said she was trying to forgive El Masry for her own sake.

"I do not want revenge for me or for him or for him," Washington said. "I am glad that he will be held accountable and one day, I hope something positive can come of it."