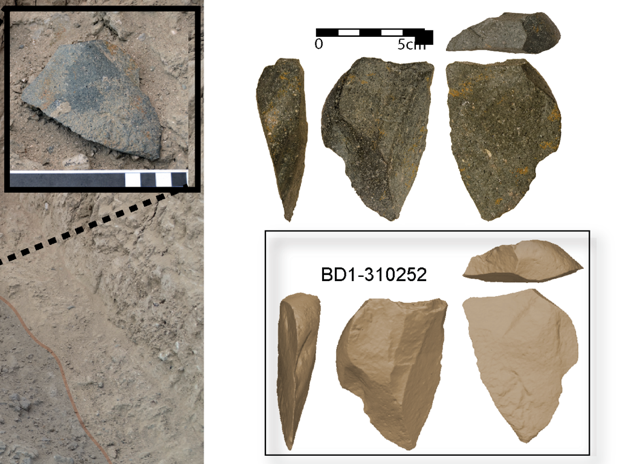 Prehistoric people have invented tools many times, according to researchers who found a collection of 327 stone weapons more than 2.58 million years ago.

This is the first evidence that ancient hominids sharpen stones to make certain tools, according to new research from Arizona State University and George Washington University.

The collection of "Oldowan" tools that were created by pitting stones was found in the Afar region of northeastern Ethiopia. They were probably made for our ancestors to cut meat.

Prior to this discovery, the oldest example of an Oldowan tool was found in Gona, Ethiopia, and was believed to be 2.56 million years old. It was widely believed that this technology was once invented and then spread throughout the continent.

This latest study, published in Proceedings of the National Academy of Science, proves, however, that this theory is false. It is believed that Oldowan tools from multiple hominid groups have been invented many times before they became an essential tool for human survival.

Kaye Reed, a research associate at the Institute of Human Origins of Arizona State University, said The Independent : "This is the first time we see people cutting off the pieces of stone with a tool Goal in the eye. They took only two or three flakes, and some that you know were not taken off properly.

"The latest tools seem to differ slightly from other examples."

The tools were found near the oldest fossil attributed to the genus Homo and located at an archaeological site in Ethiopia called Bokol Dora 1 or BD 1 is known. For five years, researchers had tried to find a connection between the origins of our genus and the creation of systematic stone tooling.

"These tools were dropped by early humans at the edge of a water source and then quickly buried. The location remained that way for millions of years, "said geoarchaeologist Vera Aldeias from the University of the Algarve in Portugal.

Our ancestors created and used tools a million years before this last find. Old hammering or "percussive" stone tools called "Lomekwian" tools were first found in Kenya 3.3 million years ago.

Like monkeys and chimpanzees, these early hominids used tools to hammer and beat foods such as nuts and shellfish. However, 2.6 million years ago, something changed and our ancestors could hit the edge of stones more accurately and skillfully to make tools.

The BD 1 artifacts capture this shift.

tools, "said Will Archer of the Max Planck Institute for Evolutionary Anthropology in Leipzig and the University of Cape Town.

However, if we looked closely at the patterns, there is very little connection to what is known from older archaeological sites or to the tools of modern primates, "he said.

This change with a change fell on our ancestors teeth. When our ancestors began to process food with stone tools before eating, we found a reduction in the size of their teeth.

David Braun, archaeologist at George Washington University and principal author of the paper, said; "With primate species around the world routinely using stone hammers to search for new resources, it is very likely that across Africa many different human ancestors have found new ways to use stone artefacts to extract resources from their environment extract.

"If our hypothesis were true, after 2.6 million years, but not before that period, we would expect some kind of continuity in artifact form. We have to find more locations. "

Reed said, "Our team will return to the field early next year and we will do more excavation elsewhere and look for more hominids to make the tool. "