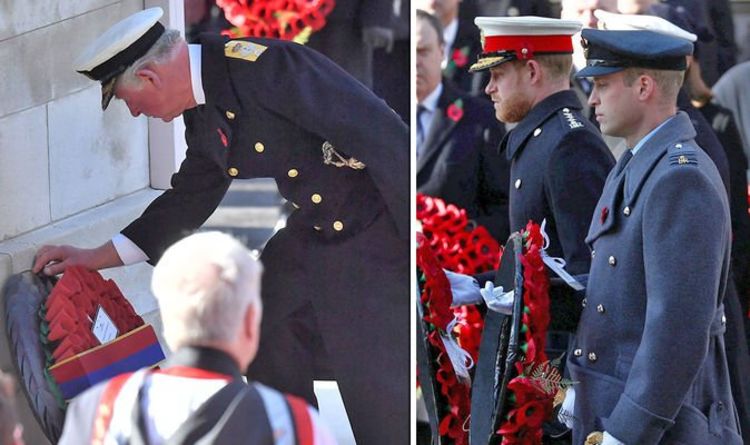 The Prince of Wales was again requested by the Queen to perform the key task in her name for the Day of Remembrance, as the monarch slowly delegated the royal duties to her heirs. As in 2017 and 2018, the Queen watched from the balcony of the Foreign and Commonwealth Office building.

Prince Charles led his sons Prince William and Harry to the cenotaph while their wives watched.

The Prince of Wales then joined the country in respectful silence for the fallen when Big Ben sounded at 11am.

The firing of the cannons by the Royal Force was the end of the minute of silence before the last post was played.

After the two-minute silence, Prince Charles approached the cenotaph to lay it at his feet.

The Prince of Wales, gloomy in his uniform, greeted the military and made room for the Duke of Edinburgh's Equerry, who laid a wreath on behalf of Prince Philip.

The Duke resigned from public service on 2 August 201

8 and has since rarely participated in public events.

Prince William and Prince Harry, both second and sixth in the line of succession, also laid their red wreaths down poppies.

Among the politicians who stood near the High Kings were Prime Minister Boris Johnson, Opposition Leader Jeremy Corbyn and five former ones Leader of the Country – Sir John Major, Tony Blair, Gordon Brown, David Cameron and Theresa May.

This year marks the 75th anniversary of D-Day, the Battle of Kohima in India, the Battle of Arnhem in the Netherlands and the battle of Monte Cassino in Italy.