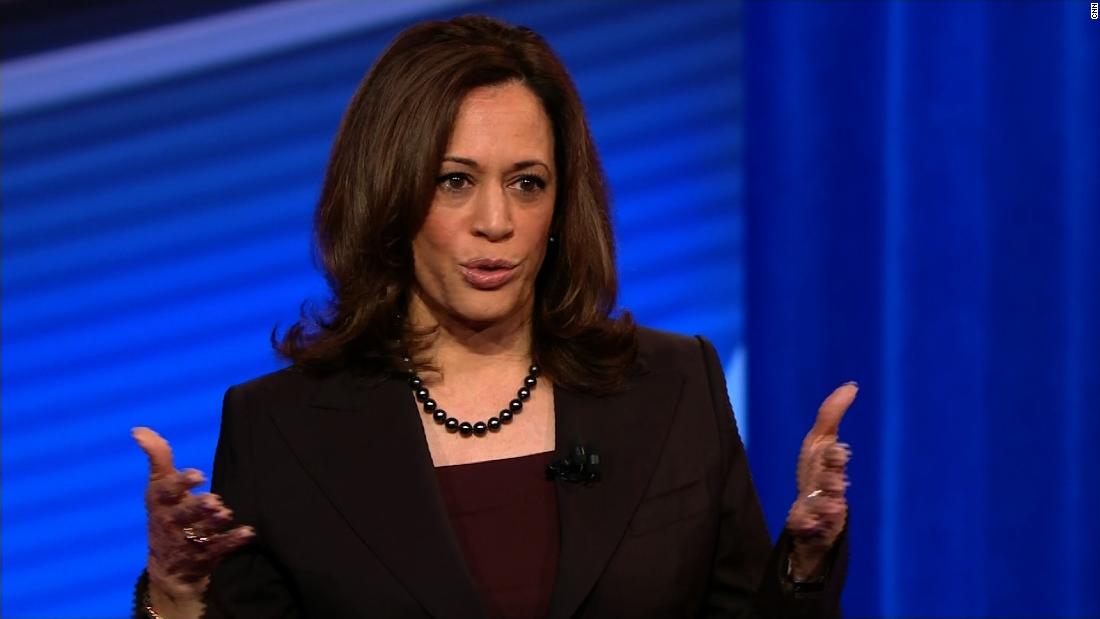 About 10 minutes after her speech, Harris was asked by moderator Stephanie Valencia about her proposal to eliminate the gender pay gap when she was approached by a tall man in black and a press pass jumping onto the stage. Harris looked startled, but remained calm as the protester took the microphone from her hand.

"We protested a few minutes ago and asked for your attention to a much bigger idea …" the man said when presenter Karine Jean-Pierre tried to intervene.

The Security Service jumped onto the stage as the Senator calmly stepped away from the demonstrator. When the man refused to leave the stage, Harris & # 39; s husband Douglas Emhoff jumped in and wrestled the demonstrator with the microphone.

The campaign told CNN that the senator was fine, and an employee of MoveOn referred to a tweet in response to CNN's request for the incident.

"We sincerely regret that a protester could win Today we have access to the stage in our forum and apologize to Senator @KamalaHarris, the protester has been removed and the program resumed." MoveOn members were excited to hear Harris continue to discuss their big idea in order to achieve a fair pay, "reads the tweet. 19659002] The protester was removed from the event and not charged.

After the incident, Sen. Cory Booker told CNN that he had seen the video and could not believe what had happened to his colleague.

This election will go on and I really hope we will see the Secret Service and others kick in, because that could have been a really terrible moment. Kamala is like a sister to me, I love her and that makes me very angry, "he told CNN.

Like Harris, Booker wants to be accessible to all voters and calls security a delicate balance when it comes to president

] "I am a pacifist, but if you stand on this stage and want to come to me this way, this is unacceptable and should be addressed with reasonable force," said Booker. "This is a risky undertaking, but Kamala is not a shrinking violet. She is one of the toughest people I know. So I'm not worried about Kamala. At the end of the day, she knows what she's doing. "