Protests May 1 in Paris: Police and protesters clash 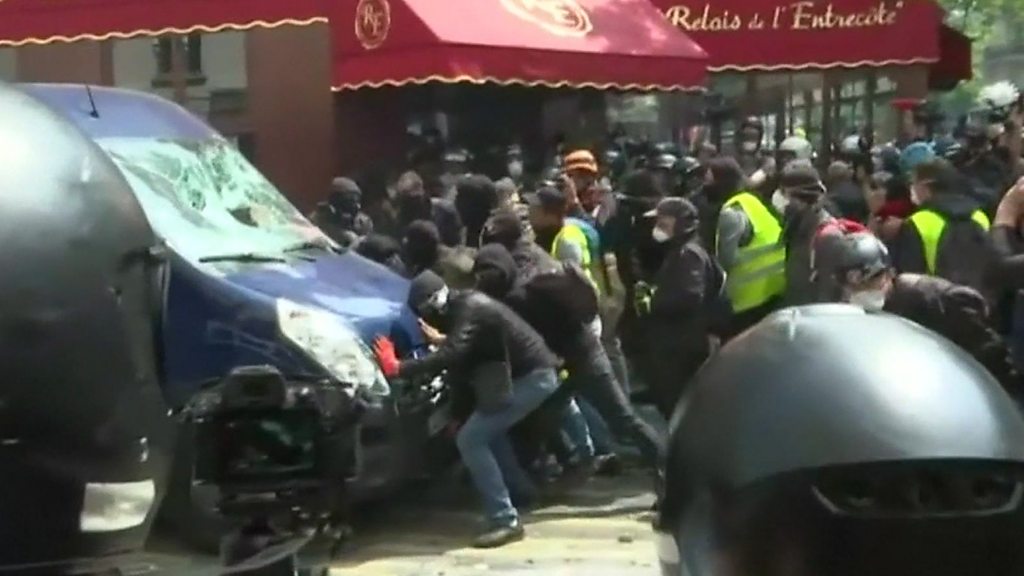 French police have fired tear gas at masked protesters who participated in major May Day demonstrations in Paris.

Some smashed the shop windows and threw projectiles at the mainland police. Dozens of people were arrested.

The clashes forced the head of the CGT union to temporarily flee the march.

Philippe Martinez told France News that "the police have indicted the CGT," although other witnesses have said the "black bloc" had attacked the unions' march.

The police said the union had never been targeted, but the police "carried out their mission with determination against violent thugs."

The French TV station BFMTV reports that the clashes forced the FSU teachers' union to leave the event.

Is this year's protest bigger?

In the early afternoon, France's Interior Ministry had more than 1

50,000 demonstrators taken to the streets and at least 16,000 in the capital – a significant increase over the estimates of last year.

Another estimate of media groups places the number far above r at around 40,000 in Paris.

More than 200 arrests were made in the capital.

Nevertheless, most demonstrators were non-violent and clashed with the police in isolated pockets.

The French National Police made a message He said it guaranteed the letter to voice its opinions and called for peaceful demonstrators to break away from violent groups.

Another French journalist reported that the Paris riot police were subject to insults, but the Paris firefighters were warmly applauded by demonstrators.

Many demonstrators have joined the yellow west movement protesting on the streets every weekend for several months.

French President Emmanuel Macron has made a series concessions to the movement, which was fueled by the high cost of living – most recently with a wave of tax cuts.

A protester, Florence, said the c oncessions had made no difference.

"We have been struggling to make ourselves heard for six months and no one cares," she told Reuters.

"People understand the movement does not seem to be pretty simple: we just want to live normally."