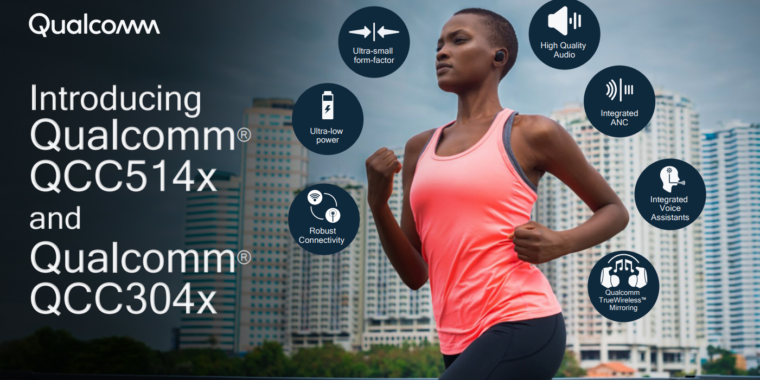 ; are made that end up in a variety of Bluetooth headphones. Qualcomm’s announcement includes two chips, the QCC514x and the QCC304x. The difference is that the 514x SoC is designed for constant speech recognition with assistants from Google and Amazon. You can only call the wake-up word and the headphones will lift off.

As expected, the focus is on better battery life. Qualcomm promises 13 hours of gaming time with a 65 mAh battery. Active Noise Canceling (ANC) is integrated in both SoCs. So expect that this high-end function will also be available for many other headphones in the future. There is also a “Hybrid ANC” mode, where you can hear real-world sounds so you stay aware of your surroundings. Qualcomm also has a feature called TrueWireless Mirroring that allows you to use the left or right earbuds in mono mode. Even if you swap configurations, the sound stays the same. Some previous designs had a “primary” earphone that communicated with the playback device and then passed audio to the secondary earphone. Now both earphones seem to be speaking directly to the playback device.

Just like smartphones, Qualcomm knows how to build the bottom end of the market by allowing smaller companies to build their own devices using the “smart” hardware from the cookie cutter. In this way, headphone manufacturers can work on the headphone part of the headphones while all Bluetooth connectivity and other smarts are integrated into the platform. Qualcomm even has reference designs for the “Smart Headset Platform” that companies can start with.

Products with the new chips should be available in the second half of the year.

Some shirts hide you from cameras – but will someone wear them?