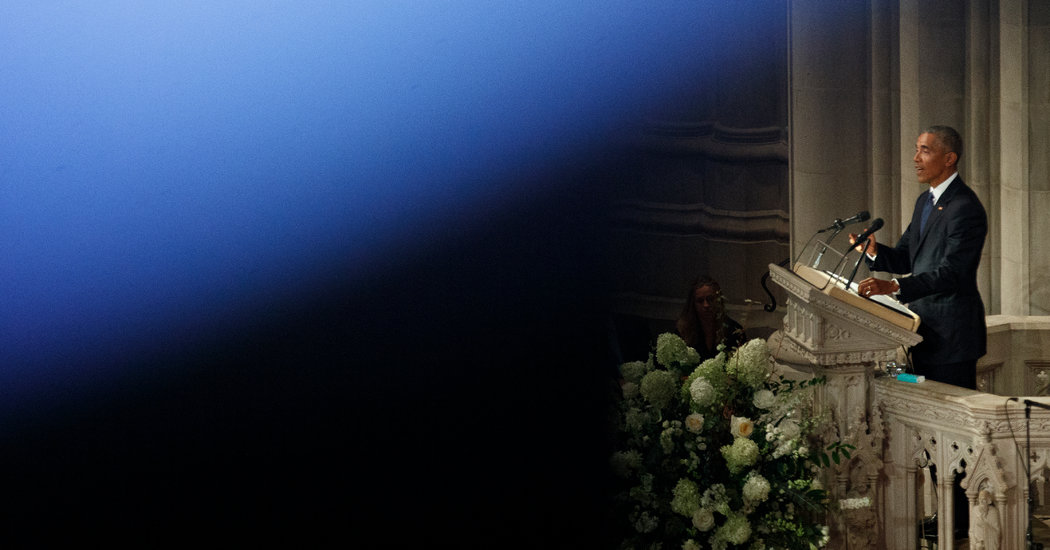 John believed in honest arguments and heard other views. He understood that our democracy will not work if we get into the habit of adjusting the truth to political convenience or party orthodoxy. Therefore, he was sometimes ready to fight against his own party, and occasionally worked on the means of reforming campaign finance and immigration reform. That's why he used a free and independent press for our democratic debate. And the fact that it gave him good coverage did not hurt either.

John understood how JFK understood how Ronald Reagan understood that a part of our country that distinguishes our country is not our bloodline; not how we look like our surnames are. It is not based on where our parents or grandparents came from or how short they arrived, but on adhering to a common credo: that we are all created equal. Equipped by our Creator with certain inalienable rights.

It was mentioned today, and we saw footage this week of John turning against followers who had challenged my patriotism during the 2008 campaign. I was grateful, but I was not surprised. As Joe Lieberman said, it was John's instinct. I never saw John treating anyone differently because of his race, religion, or gender. And I'm sure he felt defender of the American character in those moments when he was called during the election campaign, not just mine, because he considered it fair to every citizen who loves this country to treat. And finally, while John and I disagreed on all kinds of foreign affairs issues, we stood together in America's role as the one indispensable nation, convinced that great responsibility and blessing carry great responsibilities. Most of the burdens we face are our men and women in uniform-service members like Doug, Jimmy, and Jack, who have followed in their father's footsteps-and the families who serve alongside our troops. But John understood that our security and influence was gained not only from our military power, not just from our wealth, not just from our ability to bend others to our will, but also from our ability to inspire others with our attachment on the set of universal values ​​- such as the rule of law and human rights, and insistence on the God-given dignity of every human being.

Of course, John was the first to tell us that he was not perfect. Like all of us who go public, he had an ego. Like all of us, there was no doubt that some votes were cast, some compromises he made, some decisions he made, that he wished he could have back. It's no secret, it was mentioned that he had a temper and when it flared up, it was a force of nature to see a miracle – his jaw crunched, his face reddened, his eyes bored a hole through you. Not that I've ever experienced it, mind you.

But to know that John knew he was going to flare up as fast as his passions, he was just as forgiving and forgiving. He knew more than most of his own mistakes and blind spots and he knew how to laugh at himself. And that self-awareness made him all the more compelling.

We did not announce it, but John kept returning to the White House during my presidency and we just sat down and talked in the Oval Office, just the two of us – we talked politics and we talked about family and we talked about the state of our policy. And our differences did not disappear during these private conversations. They were real and they were often deep. But we enjoyed the time we parted from the bright lights. And we laughed together and we learned from each other. We never doubted the other man's sincerity or the other man's patriotism, or, when all was said and done, we were on the same team. We never doubted that we were in the same team.