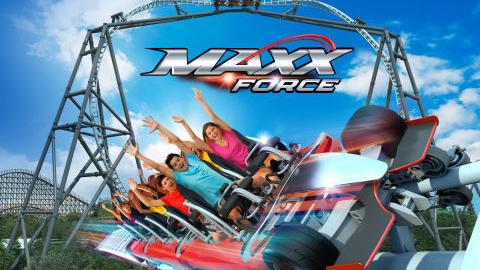 Maxx Force will be the fastest launch coaster in North America, its fastest inversion and highest double inversion on any roller coaster in the world.

1; no other coaster in the country accelerates at this speed. "

* The world's highest double inversion at 175 feet above the ground

The fastest inversion on a roller coaster in the world with a 60 mph zero-G roll.

Maxx Force is the park's 17th roller coaster and is set to debut in the Carousel Plaza area of ​​the park in the summer of 2019.

Six Flag Great America also announces the launch of 2019 Season Pass sales with Labor Day's Best Deal of the Year – Save over 70 percent on a 2019 pass.

From August 30th Until September 3, guests receive a free upgrade to a Gold Season Pass with each purchased pass. Gold Season Passes include entry to Six Flags Great America and every other Six Flags theme park, as well as free parking and special admission for friends.

Six Flags Entertainment Corp. is the largest regional theme park company in the world and the largest operator of water parks in North America, with $ 1.4 billion in revenue and 25 parks in the United States, Mexico and Canada. For 57 years, Six Flags has entertained millions of families with world-class roller coasters, theme rides, thrilling water parks and unique attractions. For more information, www.sixflags.com.

Oil rises as markets keep an eye on OPEC and Russia, which are meeting to cut production