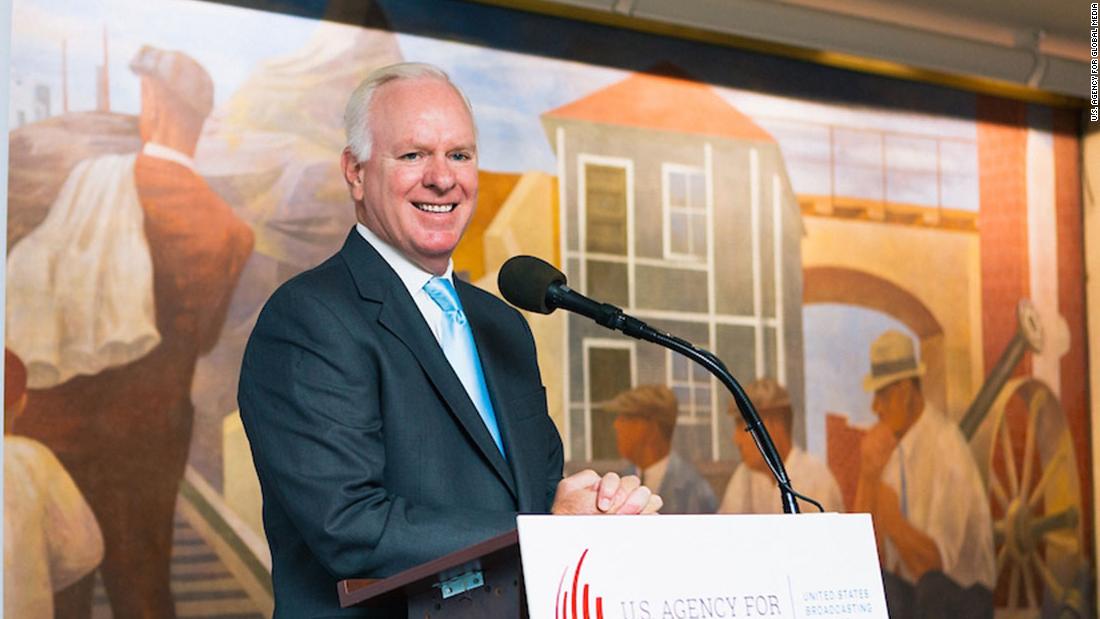 NPR, the public radio giant employing hundreds of journalists, is about to appoint a new chief executive.

John Lansing takes over from departing CEO Jarl Mohn, who has led the organization for the past five years. [19659003] Poppy announced his plan to resign late last year, but the search for his successor took longer than expected. He will officially be handed over to Lansing in mid-October.

Lansing is currently head of the US Global Media Agency, which oversees VOA, Radio Free Europe and other government-funded media outside the United States.

] Paul Haaga, CEO of NPR, said Lansing "is well suited to lead NPR into his next chapter, due to his many years of experience as a media industry manager and a practicing journalist."

David Folkenflik, media correspondent for NPR, spoke with Lansing NPR and its member stations across the country offer "journalism as a public service, not tied to a profit motive". Lansing said he defined NPR's mission as "providing information and quality to the public that allows it to" see "it on a variety of platforms.

FOR THE RECORDING, PART I

̵1; – When I send it, 10 pm ET, Dorian's eyewear is very close to Cape Fear, NC. CNN.com has the latest updates here …
– And here's the latest predictive track chart from the National Hurricane Center. These government predictions serve the public as well, even if they are undermined by the president …
– Amanda Darrach of CJR has a precious look at "how Bahamas covered Dorian …"
– The Colbert Area Code Continues: Joe Biden on Wednesday, Pete Buttigieg on Thursday … [SpeakingPetehewillbeinthe"TheBreakfastClub"ofPower1051Fridayat7amTheinterviewwillbeshortlyafter

Lester Holt of NBC spent two nights behind bars in Louisiana State Prison, a / k / a Angola, for a special report the reform of criminal justice. The special will air on Friday on "Dateline NBC". It will air on MSNBC on Sunday, "along with a Holt-moderated city hall meeting from another well-known prison, New York's Sing Sing," reports David Bauder of the AP …

Oliver Darcy emails: What's up with Bloomberg Law? After the Labor Department had reinstated Leif Olson, an official unjustly accused of the outbreak of anti-Semitism, Bloomberg Law published a story about his return to the Agency.

But one source told me Thursday that reporters at Bloomberg Law were told not to tweet the new story. The new story was also not advertised by Bloomberg Law's Twitter account. As many journalists emphasized on Twitter, Bloomberg Law continues NOT to follow what can only be described as a textbook method to cope with editorial failure.

No formal correction yet …

Darcy adds: The original article on the Bloomberg Law is still without correction or apology to Olson. However, it was updated after the reinstatement of Olson's Ministry of Labor to delete the incorrect description of his comments as "anti-Semitic" from the headline. A note from the editors said: "In light of the events that followed, we removed" anti-Semitism "from the headline and made Olson's reference to these tropics clear." I contacted Bloomberg Law on Thursday, but the staff did not comment on the recording …

FOR THE PLATE, PART TWO

– Morgan Hertzan is Viceland's new EPP and GM. Nellie Andreeva of Deadline reports that the hiring is "part of the relocation of Viceland from entertainment to news program and its integration into Vice News …" (Deadline).
– YouTube launched a new landing page for fashion brands on New York's Eve Fashion Week. Katie Rosman has all the behind-the-scenes insights on how to court the style … (NYT)
– "Meredith Corp. suffered the worst stock decline since 1986, after the publisher and broadcaster made a disappointing forecast and confirmed that the Time Inc.'s $ 1.8 billion acquisition of Time Inc. does not bring the desired payout … "(Bloomberg)
– Best Reading of the Day: Questions and Answers by Charlotte Cowles with Kara Swisher … (The Cut [19659007] Here's an idea …
Rick Edmonds of Poynter writes about "A novel idea to rescue serious journalism: Give every adult American an income tax bill $ 50 to send to a favorite newscast to donate. " He says, "This is not the work of the proverbial crackpot blogger in her pajamas, but a whitepaper from a group of seven high-profile academics, led by Guy Rolnik from the Stigler Center of the Booth School of Business at the University of Chicago." Far-fetched? Probably. "However, there is a precedent for the ad hoc group modeled program: In the last two local elections, Seattle has given citizens tax-financed vouchers for distribution as campaign contributions to a city candidate of their choice." ,

The Paywall of the Atlantic is high

Kerry Flynn has the details: Non-subscribers will only receive free access to five articles per month .The digital subscription costs $ 49.99 per Year, while print and digital together cost $ 59.99, and $ 100 per year gives subscribers other benefits such as ad-free web surfing and podcasts.

Jeffrey Goldberg, Atlantic EIC, wrote in the announcement, "More than 30 million people a month visit our website, read our print magazine, watch our documentaries, listen to our podcasts, and visit our live events. But our ambitions continue to grow. Our goal is to be a truth-maker in times of disinformation.

Kerry Flynn writes: Amazon has inadvertently closed the embargo on Margaret Atwood's new book, "The Testament," a sequel to "The Handmaid's Tale" The online book seller has mailed the book to Amazon customers who pre-ordered it this week, even though the release date is September 10.

Publishers Weekly reported how much independent booksellers were annoyed with Amazon and considered it categorized just another hit that Amazon has taken in. A spokesman for Amazon said it was a "technical flaw." More in my story here …

Speaking of "The Testaments …"

It points out that from a political perspective, "the desired outcome of & # 39; The Handmaid & # 39; s Tale & # 39; s; would have been forgotten as a piece of the time, so that my gloomy warnings would not turn out to be right turn this story has taken.

Atwood, 79, also excludes another book on Gilead to make it a trilogy and says, "I'm too old. "She is currently working on a collection of poetry …

FOR THE RECORD, PART THREE

– The rollout for" She said: "Jodi Kantor and Megan Twohey will be on" show "today Monday "and" The Late Show "on Tuesday …

– Fox & # 39; Shannon Bream has the first television interview with Neil Gorsuch before his book style next Tuesday. The interview will be aired on Fox at 8 pm on Fox …

– Azeen Ghorayshi was promoted to Science Editor at BuzzFeed where she works since 2015 ( Twitter )
– Read more about Thursday's Reliable Sources newsletter and subscribe here to receive future issues in your inbox …
– From the Factually Newsletter Team: " The US Defense Department Here are three questions about what they propose … "(Poynter)