Review of World of Warcraft 2004 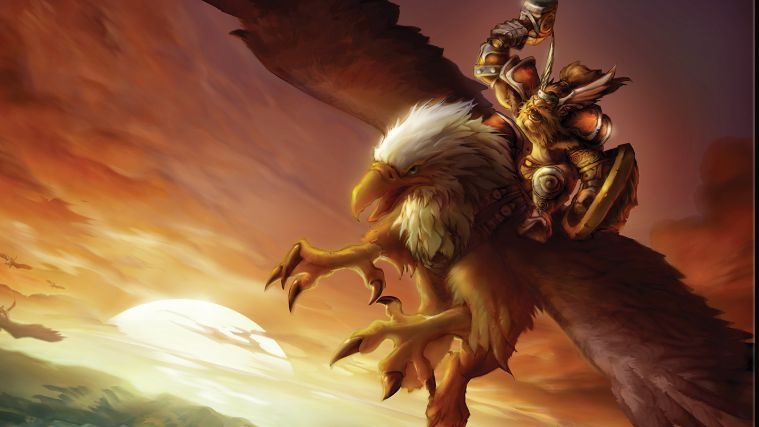 To celebrate the launch of WoW Classic, we are releasing our original World of Warcraft review. The review was published in issue 144 of PC Gamer UK in December 2004.

This review is not for the hardcore. The hardcore fans already know the truth and come here to mock my inability to get higher than level 33 before sitting down and starting to write. This review is for you, my friend. Yes you. Because I was just like you.

In August, my great game autumn was on the program: Doom 3, followed by Rome: Total War and Half-Life 2 – maybe a bunch of San Andreas and Halo 2. I had absolutely no plans to do anything beyond my usual review duties and certainly not the intention of falling for EverQuest II or World of Warcraft's silly online worlds. I had spent a few days in Ultima Online, a little more in EverQuest and about ten confused minutes in EVE Online. These games were not for me: confusing, time-consuming, pointless and populated with strangely stunned strangers. Does any of this ring a bell?

Then it happened: At a press event in September I had no choice but to create a character and play for half an hour. The scales fell out of my sight and my playing habits changed forever.

The opening minutes of an MMO are a crucial moment: when a player is at a crossroads of experience. The story is littered with corpses of failures, such as the signpost "This way for quests!" From Horizons, and even successful games sometimes do their best to prevent you from having too much complexity too soon. WoW's character creation is simple ̵

1; more of it later – but your opening minutes give you a strange sensation that keeps coming up as you go through your experiences: you're actually playing a single-player game, not one filled with hundreds of others.

It is a sensation that is partly caused by the quality of each aspect. The interface is clear and clean. They are well run, but not pulled by the hand. The level of challenge is rarely too difficult or too easy, unless you are looking for problems. The spoken dialogue is smooth but inconspicuous. They always have the feeling that they are doing something useful. not only beat rats. Most of all, I never got lost or got stuck in six weeks of play without knowing what to do next.

A word on the presentation. Cartoony, right? Here is the strange thing. After a while you do not notice it – and the real world starts to look pale, boring, washed out and disproportionately. You will wonder why your boss does not have a yellow question mark over his head. This is not just an addiction that upsets your mind. WoW's caricatured style is more meaningful than ever and allows a consistency that still allows for extreme diversity. Believe me, the cartoon approach can still be scary.

Nevertheless, some games are so good that you hardly notice the absence of innovation. Blizzard's gift is not to open up new veins of originality, but to tinker and polish existing dynamics in gold. World of Warcraft is simply the logical evolution of ideas developed by Ultima Online and EverQuest. The fantasy races and classes; the manual skills; Magic system and player versus player options are not new. By blending these ingredients with the existing Warcraft world and giving them a clear sense of purpose, Blizzard has followed his usual trick to do it better than anyone else. Warcraft's constant battle: Humans, Dwarfs, Dwarves, and Night Elves vs Orcs, Trolls, Undead, and Tauren.

Your choice of race immediately commits you to a "side" in Warcraft's constant battle: humans, dwarfs, dwarves and night elves against dwarves Orcs, Trolls, Undead and Tauren. Races have low abilities and bonuses, but the only other limiting effect of your choice is that not all races can be all classes. Only humans and dwarves can be paladins, while tauren can not be sorcerers, villains or magicians. But apart from the gender choices and some trivial aesthetic tweaks, there is not much in the beginning that sets your starting avatar apart from the others.

As you progress, you'll find that some classes have limited abilities and spells, so your character can be very similar to another even after hours of play. But here is another masterpiece: The fun of the game does not really come from the abilities and power of your own character. It's important what you do and where you go. Like a single-player role-playing game, WoW's world has been carefully crafted so you can feel part of it and enjoy it.

A sunrise over snow-capped peaks. A grab ride over enemy territory. A cozy inn, deep in a safe city. A remote coast, crawling with scary horror. Seemingly endless caves infested by strange and powerful creatures. Collect rare herbs in dim, spider-infested clearings. Extraction of useful ores on steep mountain slopes. The thrill of entering a new place and knowing that it's nothing like what you've seen before. Color, lighting, architecture, flora, fauna and even small details like street signs give each place a unique identity and make it a unique pleasure to stand there.

But exploring the world of WoW is not simply a case of wanderings. The seemingly endless quests (over 1,000) will gradually lead you to new locations with challenges that match your strength. You can even tell by a simple color code in your quest log whether a quest will be easy or nearly impossible. Turning off a certain number of monsters could be an easy task that can be done in just a few minutes. More involved tasks could be to plunge into the depths of a huge dungeon, negotiate tons of monsters, and regain a unique item. There are often quests attached to such locations, so you can kill multiple birds with one stone.

But these forbidden places often hide particularly dangerous enemies, including "elite" monster types. It's important to team up with other players to fight such beasts. A group of up to five adventurers can be formed through the chat channels, and the experience points and loot are divided according to a set of selectable rules. Cooperation takes place, goals are achieved, thanks are made and friendships are made. At least that's the theory, but group leaders can defend themselves against sassy members by changing the looting rules, and even the most naughty player can not really hurt a player in the same faction. The same is not true for opposing factions …

Player-versus-player battles have been a staple for MMOs for years, and WoW does not disappoint. Provided you choose a PvP server, you can be attacked by opposing faction players anywhere except in your faction's security zones. usually large cities and the starting area "kindergartens". For this reason, raids by large groups of players on settlements in contested areas are often carried out only to kicks. When shut down by such antics, "normal" servers limit PvP to voluntary participation in certain areas. If you are a foster child.

But if you try and are unable to overtake the level 60 troll who can kill you in one fell swoop, death is rarely a disaster. First, no one can steal your gear, and there is not even an experience point award for killing enemy faction players. Corpses that appear in a graveyard as a ghost are the norm, but seldom last longer than a few minutes.

If you can not stand to get your body back, you can rise in the graveyard and improve the durability of your items – basically a small fine – or if your party has a generous healer, you can expect to be revived on the spot, with a few minutes of resurrection disease to endure.

Galaxies or EVE Online may be disappointed with World of Warcraft's modest approach to personal wealth. There are no houses to buy or build, and few opportunities to show wealth beyond a horse or other horse. There is a crafting system, but it is quite limited. Everyone can train in all three basic skills of fishing, cooking and first aid to make basic health products and dig out strange things from lakes. There are three more collective occupations (skins, herbalism and mining) to choose from; And finally, you can try one of the six production professions: tailoring, magic, blacksmithing, alchemy, engineering, leatherworking. Everything is useful to someone, so there is money to sell your goods, but you will not be sitting in Stormwind anywhere, making the same old stuff at a low level. To find new recipes and the rarer materials needed to prepare them, you need to set out into the wild – as such, there is little point in ignoring either craft or quest: the two fit together perfectly.

Many MMOs claim to have an overarching plot that casts a spell on players. The problem is that players are used to being the hero of any story, and this is simply not possible for an online game (with unbelievable amounts of suspension disbelief). WoW does a clever thing by not ramming a few page-long stories from the start. Instead, progress is accompanied by clues to the state of the world and its policies, with key figures gradually introduced. There are many background stories that are especially appealing to fans of the RTS series, but recording notes is not compulsory. It's just a splash of color on the game's grand canvas.

A decade of PC MMOs affects every design decision in World of Warcraft, just as Blizzard has closely monitored the RPG and RTS in the Diablo and Warcraft series. Changes to common problems in the genre mean that annoyances and exploits are kept to a minimum. For example, it is impossible to steal another person's loot drops or even the experience points for killing a monster. Instances mean that popular quest locations and dungeons are replicated for each character or group that enters, eliminating queues (although more of those hotspots would have been desired).

The world is uninterrupted. The only loading screens you see are when you sign up, enter an instance, or switch between the two continents. In fact, there is very little that could distract you from the world … from the feeling that you are playing a single-player role-playing game in which many other people happen to be.

Neither EverQuest II nor World of Warcraft completely revolutionize the genre. But then, if we know Blizzard, we should not have expected so much. They are not concerned with rejecting old ideas. Instead, they've created the best fusion of existing ideas we'd hoped for by working in their rich Warcraft environment and producing everything with such care and attention that it's hard to see a traditional fantasy MMO is able to keep up with it the next few years. World of Warcraft lives up to its name, but it's not a world nobody should fear. RO