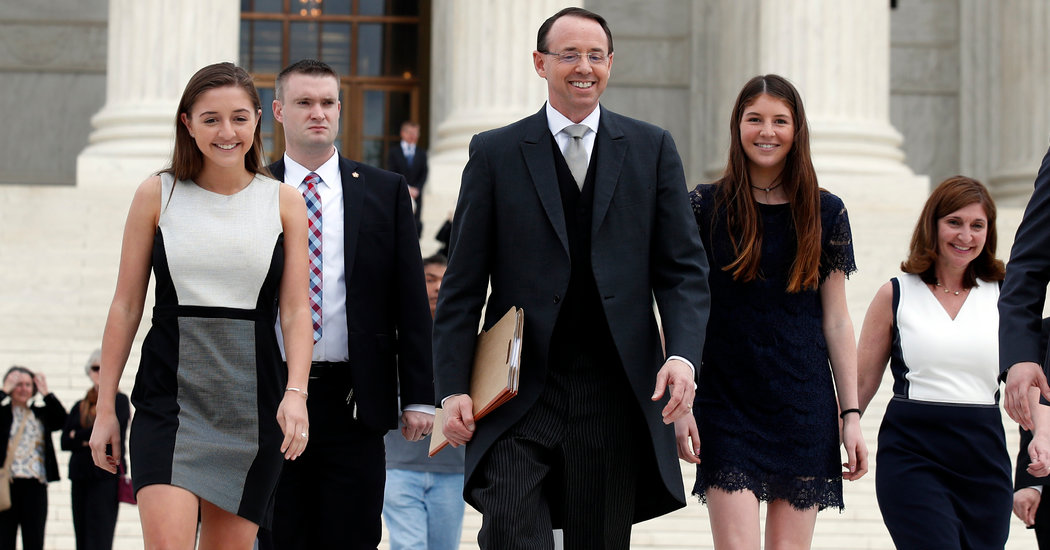 If the internal judges were "inferior officers", their appointments were unconstitutional. If they were just employees, there is no constitutional problem.

The Justice Department, which had long claimed that the internal judges were white-collar workers and not officers, moved to the Supreme Court in November 2017. In an unusual move, it asked the judges to review Lucia against the Securities and Exchange Commission, no. 17-130, even though she had won before the appellate court.

The Department of Justice also asked the court to consider the separate issue of whether legal restrictions on removal from office are allowed. On Monday, Jeffrey B. Wall, a deputy advocate general, urged the court to insist on a "clear line of accountability."

If the court raised this issue, Justice Stephen G. Breyer said, many officials could be affected. "There are a lot of officials who fit that definition," he said.

"One thing I'm sure of, or fairly certain, moderately safe," said Judge Breyer, "is that the Constitution does not inhibit the creation of a performance-oriented public service."

Mr. Wall urged the court to decide whether the judges had been properly appointed and how they could be removed, and he suggested that the second question was the more important as it would create problems of separation of powers.

On "The appointment page we are dealing with is mainly an executive practice," said Wall. "The restrictions on removal are required by law, and we are limited in our ability to keep our own house in order."

Since the two sides agreed that the internal judges had not been duly appointed, the court invited Anton Metlitsky, a New York lawyer who had served as Justice Attorney Roberts, to represent the opposite position.] The case arose from charges that Raymond J. Lucia and his company made misleading presentations to potential clients about a retirement strategy they called "Buckets of Money."

Mr. Lucia lost to a judge in administrative law and the prosecution, and a panel of three judges from the United States Court of Appeals for the District of Columbia Circuit rejected a challenge to the judge's authority. The full Court of Appeals agreed to renegotiate the case, but its judges ranged from 5 to 5.

After the Advocate General changed positions, the Commission issued a ruling on the appointment of internal judges. Mark Perry, an attorney for Mr Lucia, said his client still deserves a new chance to defend his case by saying he was the subject of an "unconstitutional trial".

On this point, Wall argued The administration broke up with Mr Perry, saying that the commission's mission "solves the problem".

Several judges expressed concerns that a ruling for Mr. Lucia would have far-reaching consequences for countless executive employees Social Security and Benefits for Veterans.

Judge Kagan said that there is something weird about Mr Lucia's insistence that the internal judges are accountable to the executive officials.

"This is a situation where we decide where we typically think we want the policymaker to be isolated from political pressure," she said. "Would not those decision makers get even closer to the political body to exacerbate the problem you're complaining about?"

Justice Anthony M. Kennedy repeated this point. "For the sake of justice, it is important that the jury member be independent," he said.

Mr. Rosenstein's argument came in a small and technical judgment. His presentation was clear and polished, and he navigated a complicated statute and a network of precedents with confidence.

The question in the case Chavez-Meza v. United States, No. 17-5639, was how much explanation federal judge (19659021) Several judges pointed out that the appeals courts would be helped to know the reasons of the judges. The judiciary Sonia Sotomayor said that a rationale, for example, could help dispel prejudice.

Mr. Rosenstein replied that judges would not reveal any illegal motives. In general, appellate courts should "assume that the district courts know the law and apply it faithfully."

Mr. Rosenstein's appearance was somewhat unusual, as the arguments of the Supreme Court on behalf of the Federal Government are usually presented by members of the Prosecutor General's Office, the elite appeal office of the Ministry of Justice.

But occasionally officials of the Ministry of Justice have spoken in court. Attorney-General included Michael B. Mukasey and Janet Reno. In 2004, James B. Comey, then Deputy Prosecutor General, argued in a Fourth Amendment to the court.