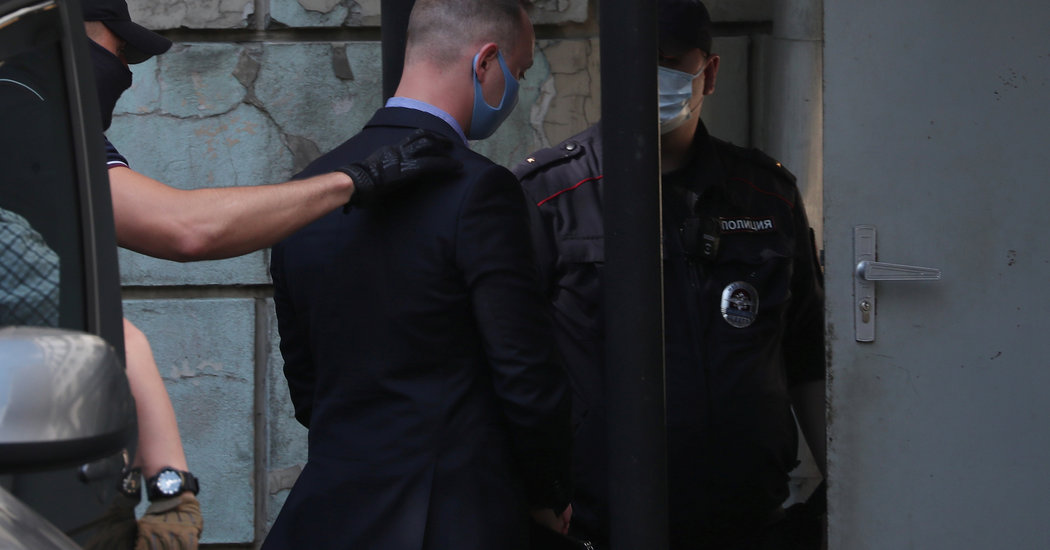 MOSCOW – Russia’s secret police detained a reputable former reporter, who has served as an advisor to the country’s chief space officer for the past few months, and accused him of treason for disclosing secrets to a NATO country.

Life News, a boulevard news site with close ties to the security apparatus, released a video of former reporter Ivan I. Safronov, who was bundled by plainclothes by plainclothes officials from the green Moscow street into a gray van, the domestic, by officials of the Federal Security Service (FSB) Poor what was known as the KGB in the Soviet era

The FSB said that Mr. Safronov was suspected of working for the secret service of an unspecified NATO country and was passing on “classified information on military-technical cooperation, defense, and the security of the Russian Federation”.

However, what information this could be was unclear. Mr. Safronov did not start working for the space agency Roscosmos until May. Before that, he worked for more than a decade as a respected journalist for Kommersant and then for Vedomosti, both private business newspapers with no apparent access to state secrets.

Journalists and ordinary Muscovites gathered in small groups in front of the FSB headquarters to protest against the arrest, outraged by what was widely regarded as another example of the overreach of Russia’s extensive and often paranoid security apparatus. Several were arrested for holding up signs to support Mr. Safronov.

Andrei A. Soldatov, an investigative reporter who wrote extensively about the Russian security services, said Mr. Safronov’s arrest on suspicion of treason was “an all-new level of repression against journalism.” While journalists were often accused of crimes, allegations of treason were “unimaginable”.

Even journalists known for their zealous loyalty to the authorities expressed discomfort. Margarita Simonyan, editor-in-chief of the Kremlin-funded television channel RT, tweeted: “It would be good to get an explanation of exactly what Safronov is accused of – journalism work for foreigners or direct work for foreign special services. There is a big difference. “

Given that hundreds of journalists work for RT abroad, Ms. Simonyan clearly fears that Mr. Safronov’s problems could be used by foreign governments as an excuse to justify the detention of their own employees, who have often been accused of propaganda for to operate the Kremlin.

Russian journalists who take over the authorities are often harassed, detained, framed and even killed. In a rare reversal, the government closed a case last June against Ivan Golunov, an investigative rapporteur who was arrested for falsifying narcotic allegations. It was generally believed that the evidence against him was made by the police on orders from the FSB to punish Mr. Golunov for reporting work that would affect the security officers’ financial interests. The authorities finally admitted that the evidence had been fabricated.

On Monday, a court in Western Russia sentenced another journalist, Svetlana Prokopyeva, for terrorist allegations that even the Kremlin Human Rights Council had described as unjustified.

In a statement on Tuesday, the newspaper in which Mr. Safronov had worked described Kommersant, his former journalist, as “the true patriot of Russia” and contemptuous claims of treason as “absurd”. Mr Safronov was said to have joined the newspaper to take up a defense post that had previously been filled by his father, also Ivan, who died in March 2007 after falling from the fifth floor of a Moscow apartment building.

The prosecutor at the time described the fall as suicide, but the colleagues despised this explanation and suspected a possible foul. The elderly Mr. Safronov died after releasing a series of bullets that infuriated the Russian military.

Putin’s spokesman, Dmitri S. Peskov, said he did not know how Mr. Safronov could have obtained classified information that would be considered a treason, a crime that can be punished with up to 20 years in prison. State secret litigation is generally closed to the public, so no one outside the system can know if there is real evidence.

A former American navy, Paul N. Whelan, received a 16-year prison sentence last month for spying after a closed trial denounced by US ambassador to Russia John J. Sullivan as “mockery of justice”.

Mr Safronov’s arrest on Tuesday caused dismay and anger among journalists, including those who largely avoided an open confrontation with the authorities. Elena Chernenko, a foreign affairs journalist at Kommersant, Mr. Safronov’s former newspaper, staged a one-person picket outside FSB headquarters, the only form of protest allowed without prior permission, and held up a sign, on the “Information and Justice in Connection with Ivan Safronov. “Police officers took her away.

Even Mr. Peskov, Putin’s spokesman, seemed surprised to be arrested by a journalist who had once worked in the Kremlin pool and whom he had previously described as highly talented.

“Ivan will have a chance to defend himself,” Peskov told journalists on Tuesday.

Sophia Kishkovsky contributed to the reporting from Moscow.