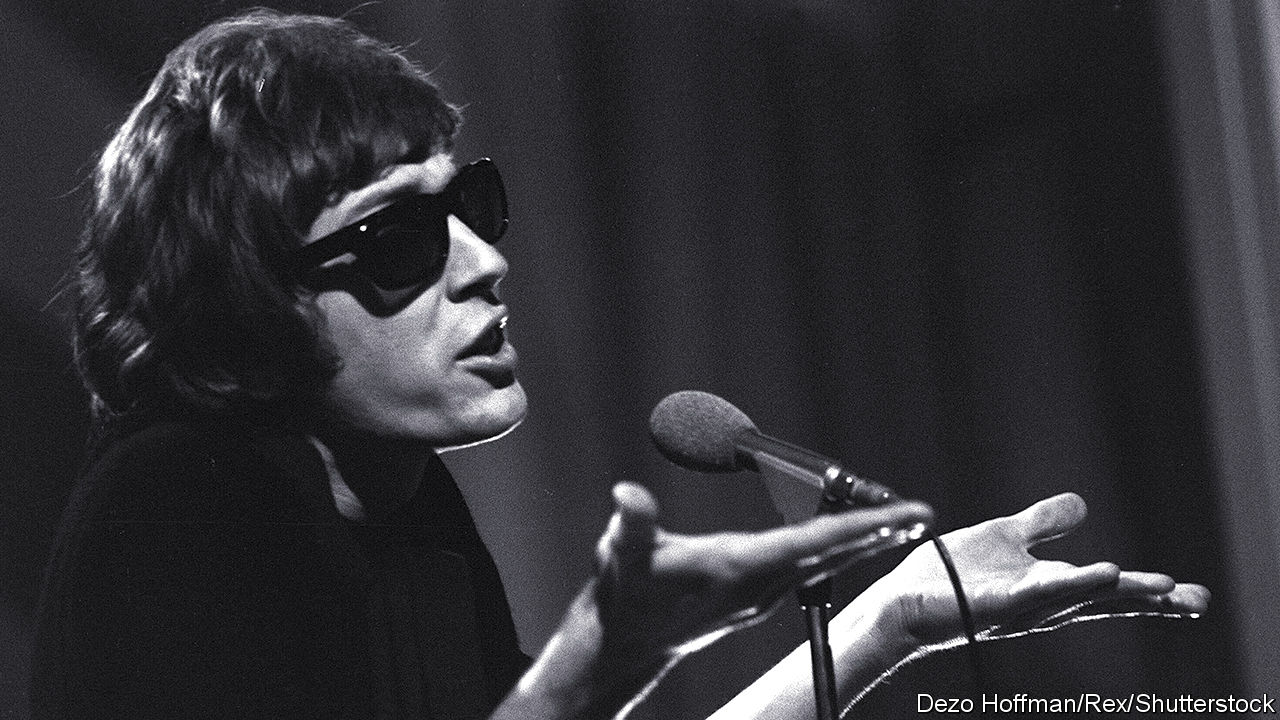 "I HAVE a very nightmarish imagination," Scott Walker said in 2006. "I've had very bad dreams all my life." The musician, who died on March 22nd, fashioned brilliant compositions from this darkness; the jarring, unexpected and gloomy songs were produced by his contemporaries. He took traditional instruments and pushed them towards abstraction, detuning guitars and rattling timpani; His influence can be felt in the music of David Bowie, Nick Cave and Pulp. In "30 Century Man" (2006), a documentary about Mr. Walker's songwriting, Brian Eno described the music as "humiliating". "We have not got any further than this," he laughed. "It's a disgrace, really."

943, rose to fame in the 1960s as part of the Walker Brothers, a crooning vocal group (they were not in fact related). After a stint as the bass guitarist-he had worked as a session on the Sunset Strip as a teenager-he became the band's lead vocalist. His melancholy baritone on "The Sun Is not Gonna Shine (Anymore)" and "Make It Easy On Yourself" helped to turn the group into teen idols, especially in Britain. Burt Bacharach, Bob Dylan and Jerry Leiber and Mike Stoller, as well as standards as "Summertime" and "Land of 1000 Dances". Mr. Walker offered moody character sketches including "Orpheus," a track on an affair with a married woman, and "Genevieve." The group officially disbanded in 1968.
Get our daily newsletter

Upgrade your inbox and get our Daily Dispatch and Editor's Picks.

Just a bankable star, Mr. Walker made the book a quartet of solo albums. They are baroque pop, covers and ballads, but also showcased his innovative ideas. With "The Amorphous Humphrey Plugg", "Plastic Palace People" and "Big Louise" he transformed the pop song by making it epic in scale, inhabited by vivid, bizarre characters. Obsessed with European film-one song, "The Seventh Seal", which is a nod to Ingmar Bergman and British kitchen-sink drama, Mr Walker reflected on disease, death and existentialism. He recorded songs by Jacques Brel, rendering them in cinematic orchestral arrangements. "Scott" (1967), "Scott 2" (1968), "Scott 3" (1969) were hits with both critics and audiences. He was so popular that the BBC gave him his own television series.

By the time "Scott 4" was released in 1969, though, Mr. Walker had tuned out the crowd-pleasing ballads and amped up the weirdness. Many listeners are moving on to rock. Mr. Walker retired for most of the 1970s, recording substandard covers on mediocre albums, perhaps to meet with contractual obligations, and reuniting with the Walker Brothers for a string of unremarkable soft-rock records. But "Nite Flights" (1978), the band's avant-garde swansong, reignited his ambition. He wrote four tracks for the album, and returned to solo with "Climate of the Hunter" (1984).

A number of records follow, increasingly adventurous in the form and lyrical content. The seminal "Tilt" (1995) featured "Farmer in the City," a haunting song envisioning the real-life murder of Pier Paolo Pasolini, an Italian poet and film director. "The Drift" (2006) explored similarly grim subject matter with songs such as "Cossacks Are" and "Clara", a track inspired by the newsreel footage of Mussolini's death that had haunted Mr Walker since his youth.

Mr. Walker's output was visionary, re-evaluating sounds as well as the song form. He was slowly and devotedly, challenging his musicians to avoid practicing or even knowing the melodies; he tasked producers with the sound of braying donkeys, or punched raw meat, to create an original soundscape. He found inspiration in strange and dark corners, and his genius was wrestling with unruly beauty from those nightmares.

Next The Daring and Drama of Tintoretto