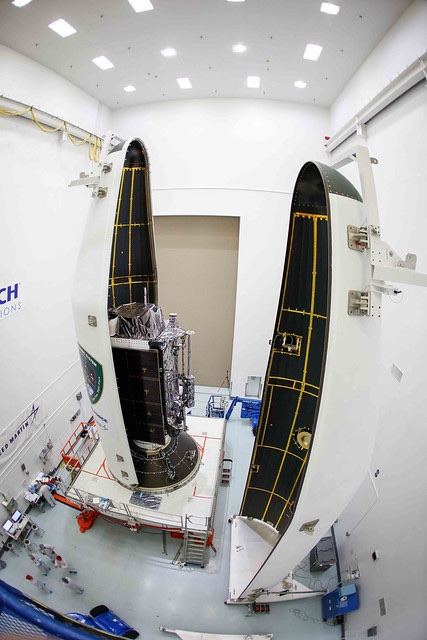 The second GPS III spacecraft built by Lockheed Martin (GPS III SV02) – also known as Magellan – was recently encapsulated in its guards in preparation for its scheduled launch on Thursday. GPS III will be launched tomorrow from the Space Launch Complex-37 (SLC-37) at Cape Canaveral Air Force Station, Florida.

The Global Positioning System (GPS) III government, contractor and mission team hosted a media conference on August 19 and 19, announcing that on Thursday, August 22, everything is on track for the launch of the Global Positioning System (GPS) III second GPS III satellite was. The 27-minute start window opened at 9:00 am EST. The team, led by SMC's Production Corps and Launch Enterprise, also announced that the GPS III program is "in good shape and capable of meeting the needs of a healthy constellation for global deployment."

Magellan's GPS III SV02 in The Honor of the Portuguese Explorer, who led the first expedition to orbit the Earth, was originally scheduled to launch last month, but was pushed back. The United Launch Alliance (ULA) stated in a published report that the delay was due to "anomaly during component testing at a supplier that caused a crossover problem" component on the launch vehicle.

Now that everything is fine, a launch webcast is expected to start at 8:40 am EDT (1

240 UTC). For information on how to track the launch live, visit the United Launch Alliance website at https://www.ulalaunch.com/missions/delta-iv-gps-iii-sv-2[19659003<TheGPSIIISV02teamisledbytheWorldsProductionCorps-undRaketensystemzentrumsdassichaufderLuftwaffenbasisvonLosAngelesKalifornienbefindetDasStartteamwirdvonSMCsLaunchEnterprisegeleitetundverwendetdasTrägerraketen-ModellULADeltaIVanderCapeCanaveralAirForceStationinFloridaLockheedMartinSpaceSystemsCorporationistderHauptauftragnehmerfürRaumfahrzeugeDer50Weltraumflügelunddas2GeschwaderdesLuftwaffen-WeltraumkommandossteuerndieGPS-KonstellationvonSchrieverAFBColorado

Background
In May 2008, Lockheed Martin became the first GPS III incremental order for the development and production of two first spacecraft (SVs) with options for up to 10 additional SVs. GPS is a National Security Space (NSS) mission critical to national defense. In April 2016, SpaceX received its first NSS launch mission, GPS III-2. SpaceX currently has four more GPS III SVs in the contract, all of which are launched on a Falcon 9. SpaceX launched SV01 in December 2018, SV02 was due to launch on Delta IV of the United Launch Alliance in July, SV03 is due to launch in July. SV04 is expected to be launched in 2020 by the end of 2019, and SVs 05-06 are expected to be launched in the near future come.

GPS III-SVs will introduce new features to meet the demanding needs of both military and civilian users. It has the full ability to use M code to support warfighter operations. GPS III's nominal M-code capability exceeds the maximum M-code capability of GPS IIF and GPS IIR (Flex performance without P (Y) code). It is expanding international collaboration in the global navigation satellite system (GNSS) by sending the L1C signal interoperable with Galileo, the Quazi Zenith Satellite System (QZSS) and other GNSS systems. GPS III is required to complete the provision of the L2C and L5 signaling capabilities that began with the updated GPS IIR-M and GPS IIF satellites. Using an incremental approach, new features that require technical maturity or a higher risk of proper integration are postponed to later stages to ensure low-risk, high-confidence deployment.

Other details provided by the team: