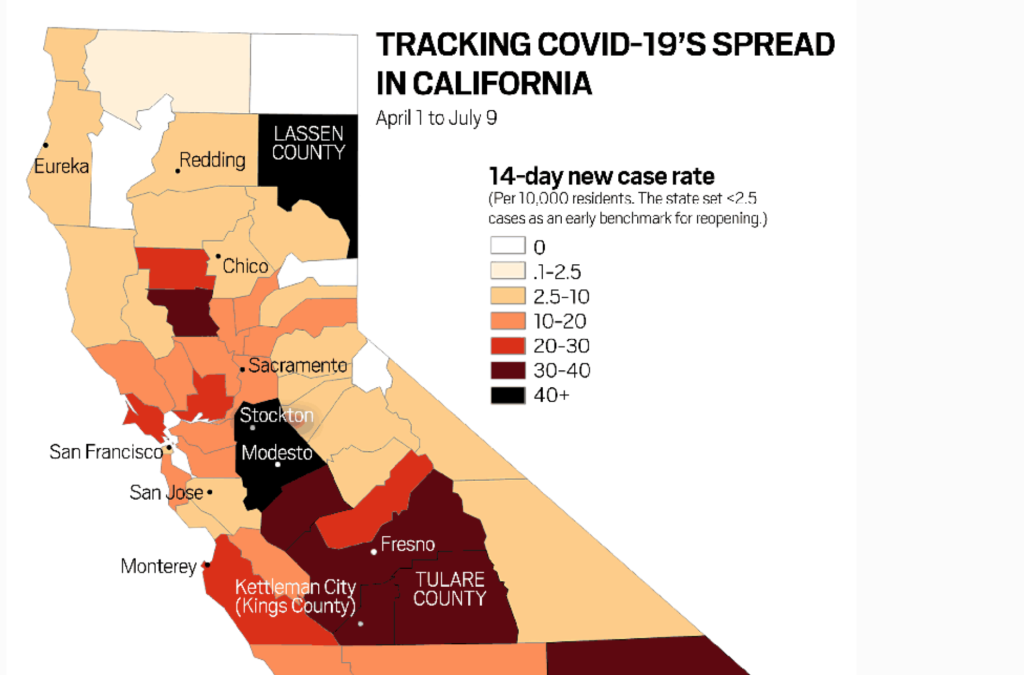 The spread of the virus is accelerating, but worsening outbreaks are concentrated in some parts of the state. To see where the virus spreads, we calculated the rate of new cases in each county, the number of cases reported per 10,000 people over the past 14 days, and then assigned this data over time. The animated map shows how and when the corona virus spread in California from April 1 to July 9.

In early April, the virus was most prevalent in the Bay Area and Southern California counties, and concentrated more on the Los Angeles and Imperial counties towards the end of the month, due to widespread transmission by the population. In May, the virus continued to spread across the state as large outbreaks in prisons in Santa Barbara and Kings County resulted in spikes.

In June, the virus became more prevalent in many parts of Southern California and the Central Valley, and in late June and early July, with few exceptions, the virus spread rapidly across most of the state.

While the state has dramatically increased the tests for the coronavirus, this does not fully explain the rising infection rate. The positive test rate declined for weeks as test capacity increased rapidly but started to increase again in June.

The map shows that California’s early home stay likely saved the state from early exponential growth in countries like Italy and New York. While the Golden State kept the curve under control for many weeks, the trend lines got steeper and worse this month.

Use our Coronavirus Tracker to find more data on coronavirus cases, hospitalizations, and deaths in the Bay Area and elsewhere in California