See red in the fossil record 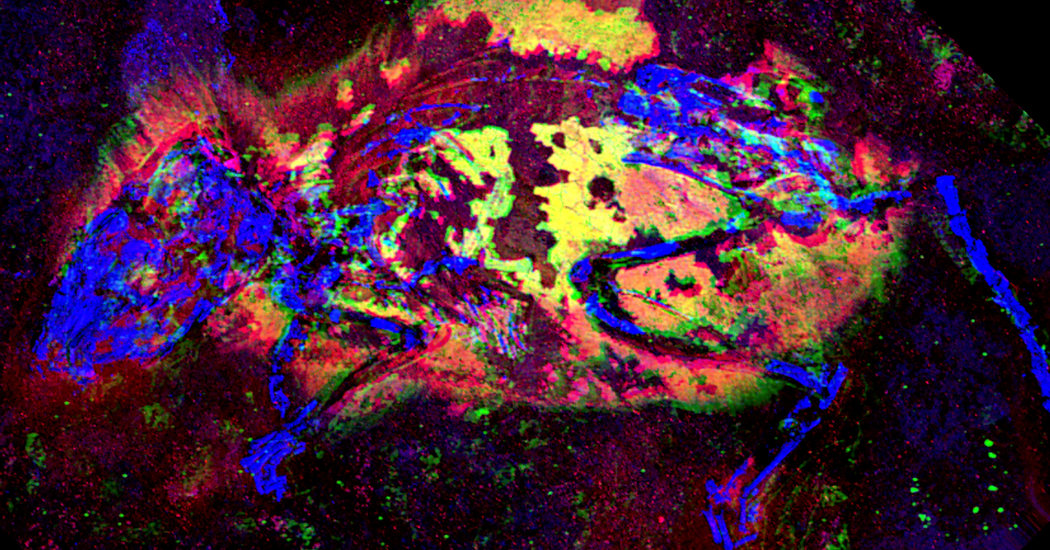 What color did T. Rex have? What about Triceratops or Glyptodon? Until recently, the range of prehistory was the only source of daydreams, CGI artists or children with colored pencils.

Advances in imaging technology bring us closer to real answers. Over the last decade, we have learned that the tail of Sinosauropteryx was striped and the head of Microraptor was blue-black and shiny, like that of a crow.

An article published in Nature Communications on Tuesday supplements the paint box. In it, a research team provides the first conclusive fossil evidence that an ancient creature contained phaeomelanin ̵

1; the same pigment that gives chicken feathers, tiger skin and freckles a red hue. Their results and the method that led to them will allow researchers to look for further evidence for this staining throughout the fossil record.

Even in well-preserved fossils, pigments deteriorate rapidly. The researchers have some workarounds to find clues to the color. Some are looking for melanosomes, the organelles in animal cells that produce and store pigments. The shape of a melanosome may indicate what type of pigment was once inside, while the organization of melanosomes in a feather may indicate whether a bird (or dinosaur) was dull or iridescent.

Another technique is to search for more consistent molecules that are known to be associated with pigments. This is the preferred tactic of this research group, which had previously found evidence of eumelanin – a brown and black pigment – in the plumage of the feathered dinosaur Archeopteryx.

For this new study, researchers used two specimens of an extinct field mouse, Apodemus atavus. Three million years ago, some of these mice died and were flushed into a pond in today's Willershausen. Quickly buried by sediments, they were protected from spoilage by bacteria and time and ended up in a fossil drawer in the Geoscience Museum of the University of Göttingen.

Phillip Manning discovered her in the museum's collection a few years ago.

"I have seen the extraordinary conservation of fur," said Dr. Manning, a geologist at the University of Manchester and principal author of the newspaper. "I realized, 'damn it, these are worth scans for!'

The mice were sent to the SLAC National Accelerator Laboratory in California for a special X-ray exposure revealing their chemical structure. The X-rays work on a sufficiently fine scale to detect "a bit of sulfur or a little bit of zinc or copper," said Uwe Bergmann of Stanford. "We can quickly get maps of different elements." (Dr. Bergmann originally developed this technique in the early 2000s to expose ink on erased and sealed pages of the Archimedes palimpsest.)

Next, the team used spectroscopy to expand two key elements: zinc and sulfur. In mammals and birds that live today, phaeomelanin is closely associated with certain zinc-sulfur compounds. The researchers also saw this in the fossils, which meant that their coat was filled with the reddish pigment. They found a higher concentration on the dorsal side, suggesting that the mouse had a lighter belly.

"When we first understand this delicate relationship between zinc and sulfur, we can confidently say, 'Yes, that's phaeomelanin pigment in the fossil record,' said Dr. Manning.

More important than her conclusion about the color of the mouse is what makes her process possible. Previous approaches to color detection were piecewise or destructively. "However, this new approach seems to allow coloring pigments to be replicated across an entire fossil," said Mike Benton, a paleontologist at Bristol University, who was not involved in the study.

group is working on further streamlining the scanning method, "so anyone can easily bring in fossils," Dr. Bergmann.

Prehistoric world, get ready to blush.