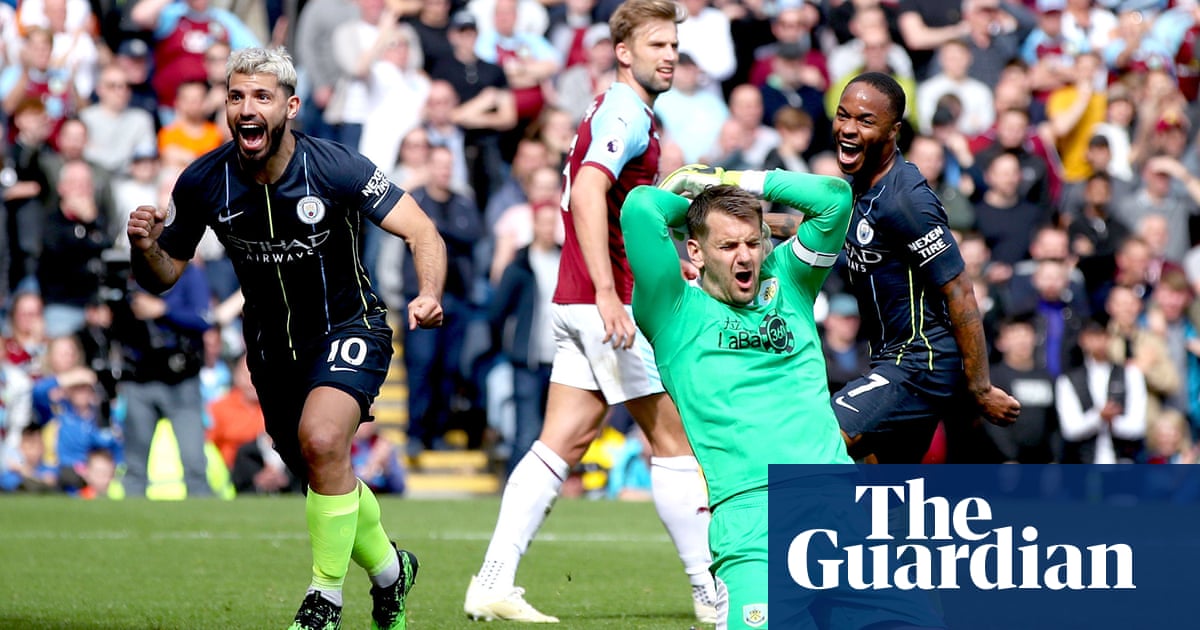 Thirty-six games in, the title race ran dangerously close to becoming a torment for Manchester City. For over an hour, they looked like they were blinking in their stiff competition with Liverpool.

Something had to be given, and the players of Pep Guardiola played with the feelings of their followers during these passages when they lacked the usual security of touch.

Unless, of course, this is the crew whose followers like to sing, how to "fight to the end". The team, which will not forget, once won the league with the last kick of the season. The city even has a bar in Etihad Stadium – "The 93:20" they call it – to commemorate Sergio Agüero's contribution on this occasion, and here he is seven years later still important targets and shows that he is the man for the big ones is opportunity. No wonder Guardiola was so praising. "Aah, he's a legend," the city manager said afterwards.

Agüero's last goal puts him next to Alan Shearer as the only two Premier League players to score 20 or more goals in six different seasons.

The more important detail refers to what this title-race goal means on a day when the supporters of Liverpool, an hour later, dared to believe that the moment was moving dramatically in their direction. Instead, it turned out City's twelfth straight win in the City to improve their lead over Liverpool back to a point, and if they can extend that sequence to 14 in their last two games by bringing Leicester home and then Defeat Brighton, then there is nothing that Jürgen Klopp and his team will have players can take action against.

It was the first time that Tom Heaton had scored at Burnley's goal to hinder City's top scorers. Matthew Lowton blocked the ball on the goal line, but there was a reason why referee Paul Tierney felt a humming on the bracelet.

It was the goal line technology that let him know that the ball had kicked it off the line. In another era Burnley might have got away with it. But not here. Twenty-nine millimeters, to be exact.

Burnley was a clumsy adversary, and City did not always look like a master of waiting, especially in the first half, when in their homeland even some "Ols" came from home-ownership. OK, they did not even get half a dozen passes before City got the ball back. However, it was a clear sign that the game was not going the way Guardiola and his players wanted.

Perhaps they missed the elegant elements of Kevin De Bruyne. Maybe they are not so smooth when Fernandinho is missing. Or it turned out they were not immune to nerves after all.

Whatever it was, it was strange to see Raheem Sterling and Leroy Sané play so little threatening in the first half. David Silva did not have his usual influence. Bernardo Silva, such a delightful player, was more effective in exchanging positions with Sterling. During this time, there were few opportunities for Heaton to rescue his team. Even then, they were more of a goalkeeper than real danger.

At one point Oleksandr Zinchenko had the ball at his feet and a moment of negligence made him throw in the ball. Not long after, Sané, waving his arms angrily at Agüero, in his desperation for something to happen, saw a pass over him. Sané had won his place after a brilliant performance as a substitute in Manchester United's city win last Wednesday, but struggled to continue where he left off and was replaced immediately after the goal.

The best chance of The first half actually fell on Burnley when Kyle Walker lost his foot and Jeff Hendrick saw the chance to get Chris Wood on goal. Unfortunately Wood was not so aware of the possibilities for Burnley. His touch was heavy and Ederson was fast from his goal line to ward off the danger.

After the break, City put down their opponents with an almost tireless pressure. They had to be punished when Ashley Barnes launched his arm to stop Bernardo's shot, and Ben Mee had to double the lead in the 1-0 draw with a brilliant goal from San Mees replacement Gabriel Gabriel. [19659002] Guardiola later realized that his team had not conceded a single corner, thus suppressing Burnley's set-set threat.

However, it was still a tense target, and his condition could probably be summarized by his decision to replace Agüero with John Stones and bring another half, Nicolás Otamendi, for Sterling. "I was shaking," said the city manager.