Shuri Castle, a historic tourist magnet on Okinawa, is destroyed by fire 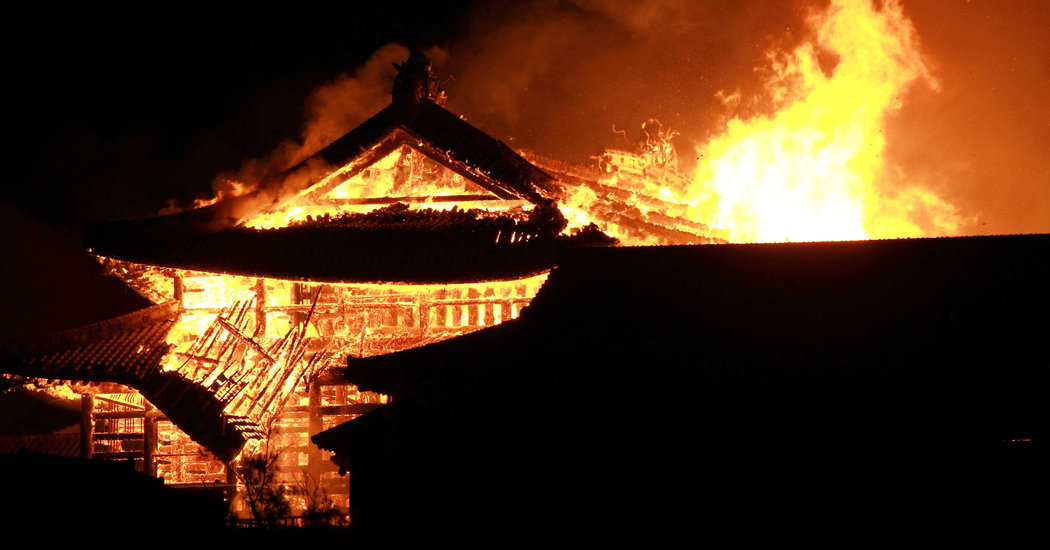 A devastating fire on Thursday destroyed most of Shuri Castle, a top tourist destination on Okinawa, Japan, and a World Heritage Site that once housed a kingdom stretching back over 450 years.

The fire, which was first reported at 2:40 in the morning, did not injure anyone and, according to local officials and news reports, was canceled at 11:00 in the morning. According to NHK, the national broadcaster, the fire has burnt down seven buildings, including the stern main hall.

Television pictures showed flames enveloping the skeleton of the main hall, a symbol of Okinawa standing on a hill overlooking the city of Naha. The cause of the fire is not yet known.

The wooden castle built more than 500 years ago served as the palace of the Ryukyu Kingdom, which ruled from 1429 to 1879 when the Ryukyu Islands were annexed by Japan. It was destroyed several times in its history, most recently in 1945 during the Battle of Okinawa in World War II. The site was reopened in 1992 as a national park and restored the castle in its original form.

Tourists flocked there, and the United Nations Educational, Scientific and Cultural Organization declared it a World Heritage Site in 2000.

] "The exact replica of the lost structure is today a great monument that symbolizes the pride of the Ryukyu," reads the website of Unesco. The Ryukyu Islands are located southwest of the four main islands of Japan.

Kurayoshi Takara, a professor at the Ryukyu University, told NHK that the fire brought not only the building and its history but also many of the invaluable artifacts, such as tools used in the kingdom. "I can not accept reality," he said.

Mikiko Shiroma, the mayor of Naha, the capital of Okinawa Prefecture, said the local government would consult with the central government on reconstruction, Ryukyu Shimpo, a local newspaper.

City officials said that no sprinklers had been installed in the castle, but that some were under the roof of the main building to prevent the ingress of fire from outside, the newspaper reported. Inspections are conducted twice a year, and firefighting takes place at least once a year, officials said.

After the devastating fire at the Notre Dame Cathedral in Paris in April Japanese civil servants said they would investigate the national treasures in emergencies and make new arrangements to prevent fires.

"I have no words as former Minister of Cultural Heritage," said Masahiko Shibayama, a former Education Minister, on Twitter . "After the fire at the Notre Dame Cathedral, we have just begun to review fire safety measures on cultural assets."

Makiko Inoue and Hisako Ueno contributed to the coverage.