Haumea was discovered in 2004 and is a dwarf planet located off the orbit of Pluto in a region of the solar system known as the Kuiper Belt. Pluto was downgraded in 2006 due to the discovery of Haumea and other dwarf planets from the category of full-fledged planets.

Haumea was officially recognized as a dwarf planet in 2008. Its ellipsoidal shape resembles the ball used in rugby or American football. It has two moons and a ring. Because of his ring, Haumea is a member of a group of solar system objects that include the planets Saturn, Uranus, Neptune, and Jupiter, as well as the asteroids Chariklo and Chiron, which orbit between Jupiter and Neptune.

Haumea's ring has never been directly observed. Its existence was derived in 201

7 from an international group of astronomers who made detailed measurements of light fluctuations when Haumea hid a star (in front of a star). In space, occultation occurs when an object passes from one observer's perspective to another.

"The star's light was observed from the earth as Haumea's star was obscured, and its brightness diminished as Haumea passed in front of it, allowing astronomers to obtain information about Haumea's form," said Othon Cabo Winter, full professor at the Faculty of Engineering of Sao Paulo State University (FE-UNESP) in Guaratingueta, Brazil.

"The light of the stars also disappeared as the ring fell in. This allows them to also get information about the ring."

The researchers who discovered the ring in 2017 suggested that its orbit around Haumea was very high lies close to the 1: 3 resonance region, which means that ring particles rotate making a revolution every three times Haumea.

A recent study by Winter, Tais Ribeiro and Gabriel Borderes Motta, part of the UNESP group Orbital Dynamics and Planetology, shows that a degree of eccentricity would be required for this resonance to act on the ring particles.

The fact that the ring is narrow and practically circular prevents loud winter the effect of resonance. However, the group identified a certain type of stable, nearly circular periodic orbit in the same region as the ring of Haumea. A periodic orbit is an orbit that repeats over time.

"Our study is not observational, we did not directly observe the ring, nobody has ever done it," said Winter. The reason is that the ring is very thin and too far away to be seen by the astronomical observatories here on Earth. The average distance between Haumea and the Sun is 43 times the distance between Earth and Sun.

"Our study is fully computational based on simulations based on data available on Haumea and the Ring, Newton's Law of Gravitation governs planetary motions, and we concluded that, due to the 1: 3 resonance is not located in this area of ​​space, but due to a family of stable periodic orbits, "Winter said.

In an article published in Monthly In announcements by the Royal Astronomical Society, researchers are researching the dynamics of individual particles in the region in which the ring is located.

The research behind the article was part of the thematic project "On the Significance of Small Bodies in Orbital Dynamics" by the Sao Paulo Research Foundation – FAPESP and with the support of the Brazilian Federal Government via CAPES, the University Research Council, and CNPq, the National Council for scientific and technological development.

"The main goal of our research was to identify the structure of the Haumea ring in terms of the location and size of the stable regions, and to find out the reason for the existence of the ring as well Understand structure associated with the 1: 3 resonance, "said Winter.

The researchers used the Poincare cut surface technique to analyze the dynamics of the region in which the ring is located: By simulating the trajectories of particles in the region, computer graphics ( Sections) that represent stable regions as islands (closed curves) and unstable regions as irregularly distributed points.

The islands of stability caused by the 1: 3 resonance had very eccentric orbits, more than would be compatible with the ring (narrow and round).

"On the other hand, we have discovered stability islands in the same area but with low-eccentricity trajectories that were compatible with the ring, and these islands were found to be based on a family of periodic orbits," Winter said.

Haumea a diameter of 1,456 km, less than half the diameter of Mars and an oval shape that makes it twice as long The dwarf planet is so far away and the sunlight that reaches it is so weak that its surface temperature is minus 223 ° C.

Haumeas Monks Namaka and Hi'aka were discovered by the giant lenses of one of the observatories on Hawaii's dormant volcano Mauna Kea. The dwarf planet is named after the Hawaiian goddess of fertility and childbirth, and its moons are named after Haumea's daughters dwarf planets and some other bodies.

Haumea completes a rotation in less than four hours and turns faster than any other known equilibrium body in the solar system. This may be related to a violent past.

Astronomers believe Haumea was originally similar to Pluto when the solar system was formed. Billions of years ago, a large object could collide with Haumea, ejecting most of its surface ice and spinning it much faster than the other dwarf planets. Research

The million outer planets of a star named Sol 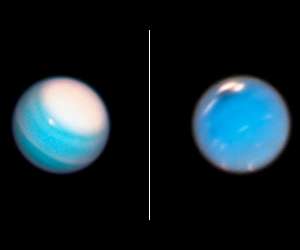 Next generation NASA investigator The Uranus Atmospheres and Neptune


Since NASA's Galileo mission, NASA has launched a probe into the atmosphere of Jupiter to investigate, among other things, the heat engine that is being used the atmospheric circulation of the gas giant drives.

A NASA scientist and his team at the Goddard Space Flight Center in Greenbelt, Maryland, are taking advantage of these advances to develop a smaller, more powerful net flow radiometer.