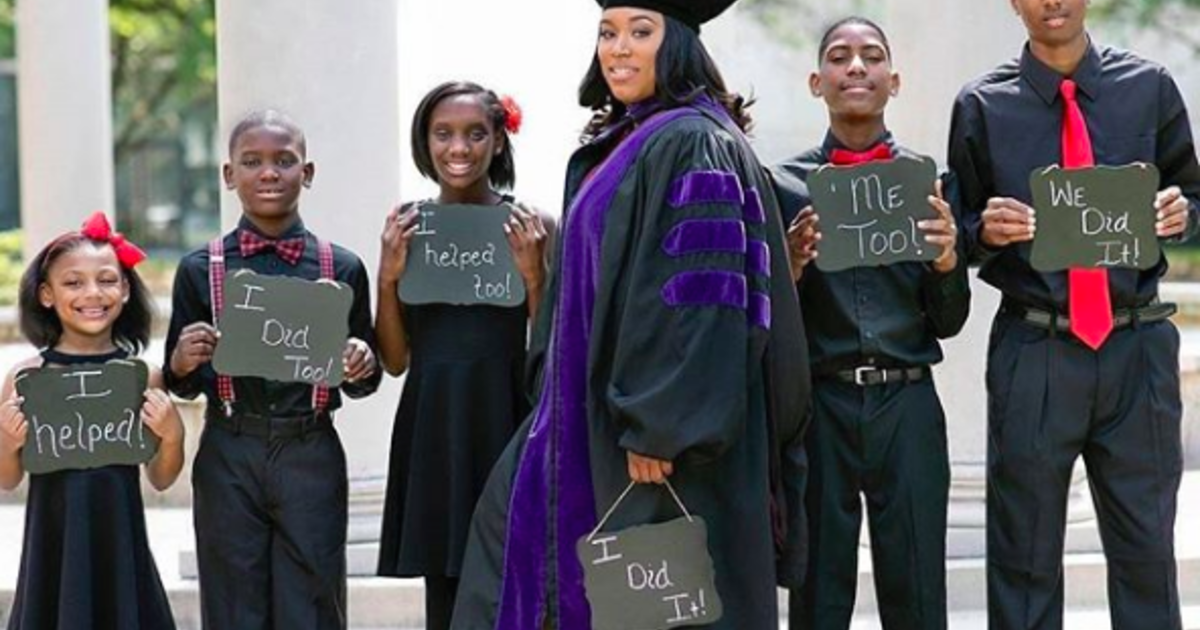 Ieshia Champs wanted to become a lawyer since she was 7 years old. In her teenage years, however, the odds began to pile up against her and it seemed her dream could be out of reach forever.

"I really did not have stable leadership at the time, my mother was addicted to drugs." My dad passed away. And I was homeless, "Champs told CBS News." I lived with friends or whoever took me in. Then I became pregnant with the first of my five children, and things just went from there. "

Ieshia left high school and got a job in a call center to support her growing family. Then, in 2009, when Ieshia was pregnant with her fourth child, she suffered a lot of losses. She lost her home to a fire. She lost her job. She lost her father's father to cancer. And then, she says, she lost her sanity.

In the depths of despair, Iesha CBS News says she has tried to commit suicide. Shortly after, she received a fateful call from her pastor.

"Pastor Louise Holman called me one day and said that God told her to go back to school and get my GED because that lawyer wanted to be me. I'll be!" Champs remembers. "I thought it was a bit crazy because I was too old and I had three kids with my fourth child on the way."

But if God had wanted it, that woman of faith thought she should probably listen. Ieshia dutifully went back to school and got her GED. She then moved on to Houston Community College and then to the University of Houston-Downtown.

Now she graduated from the Thurgood Marshall School of Law at Texas Southern University in May. To the delight of the people on social media, she commissioned a series of photos to celebrate the occasion.

"I did the pictures with my kids because they helped me through the school and they graduate too!" Champs joked proudly. "They would help me check with flash cards while I was cooking, they would sit as a pseudo jury while teaching them what I learned that day, I would sit in my closet and pray and cry because I'm overwhelmed and my eldest son David. " He collected his siblings, gave them a snack, had them take a bath, collected their school clothes, everything to make things easier for me. And I did not know that he did that until I did it!

In one of those photos, which has become viral, Ieshia stands with a paragraph on a stack of books in front of her five children, holding in her hands a blackboard with the words, "I did it!" Her children stand behind her and hold their own blackboard messages: "We did it!" "I helped too!" "Me too!"

"When I look at the pictures, I cry, I smile, and I'm very thankful, "Champs told CBS News." I see a woman who once knew the odds were against her. When I look at this picture, it reminds me that I have not only defied the adversities, but that my children and I have destroyed them. "

Tens of thousands of Likes became quickly noticed in the social media on the photo, and from all corners of the country came comments.

"As a mother and a woman interested in law school, I love to ask her for her best advice when it comes to law school," wrote an Instagram user, adding : "Congaaaaaaaaaats! #goals" [19659002] Aside from the Internet jargon, this is indeed a story about goals – goals, goals that seemed destroying for a certain time, and goals that finally ended with the help of faith, resilience and goals the power of the human spirit.