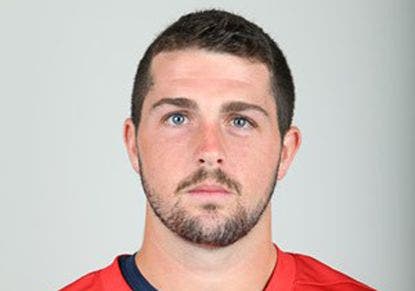 The dust-up started when Matthew Stockfeder, 21, apparently woke his roommate up by playing loud music in their off-campus Queens apartment late Monday night, according to law-enforcement sources.

The roommate, Justin Corpolongo, 23 – a 2018 university alumnus who used to play on the lacrosse team – told Stockfeder to shut down the tunes, sources said

But the captain repeatedly texted Corpolongo, apparently prompting the rival to show up for the house, police and sources said.

The two men squared off, and the victim tried multiple times to puncture the barrel.

At one point, the victim was held down when he fell "felt a sharp pain to his abdomen, "the complaint states."

Corpolongo was rushed to New York-Presbyterian Hospital in Queens,

He was "looked down to see that he was bleeding profusely." where d

Fiveshooter, a senior from Melville, LI, was ordered on $ 5,000 bail by a Queens Criminal.

Police interviewed four people in the house at the time of the brawl Court judge. His lawyer, Anthony Como, did not immediately return a phone call.

St. John's said in a statement that it is aware of the incident and cooperating with authorities.