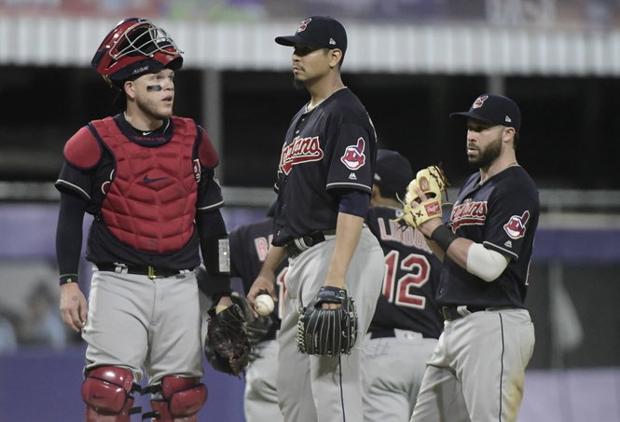 SAN JUAN, PR – The second and final chapter of the Puerto Rico series between the Indians and the Twins was almost non-existent, with an island blackout a few hours before the game on Wednesday night.

But the city of San Juan opened its power network to Hiram Bithorn Stadium – the baseball stadium was supposed to be running on backup generators – and the game was played. But if city officials needed another source of energy, they could have joined Carlos Carrasco and Jose Berrios. They brought the heat for seven innings before they went without result.

The pitching dominated until the 16th inning, when Ryan LaMarre's single Josh Tomlin gave the Twins a 2-1

victory with his base stack. Tomlin was the eighth helper to work in the game.

The inning made a mistake from second baseman Jason Kipnis. After Eddie Rosario hit a leadoff single, Logan Morrison sent a double-play ball to Kipnis. Kipnis came on the ball and he went under his glove when Rosario finished third.

The Indians intentionally went to Eduardo Escobar to load the bases to build up a force at some base. That was when LaMarre ended it with a single one through the middle of a drawn infield.

In the 14th, Edwin Encarnacion, in a 2-by-32 skid, predicted the Indians, 1-0, with a homer from Trevor Hildenberger. It looked like the Indians were doing pretty well, but Miguel Yano returned the favor at the end of the innings when Matt Belisle led the game for the first time.

The Tribe went for a 0: 12 lead scoring position and stranded 12 runners. The Twins went 1: 9 with runners in the standings and stranded 14 runners.

"We have the lead, but it did not take long," Francona said. "When a game comes to that point, it usually depends on who makes a mistake and we did it."

The Indians missed in extra-innings one chance at a time. They placed the leadoff hitter on the base five times between the 10th and 16th inning, but failed to score.

In the tenth Puerto Rican native Roberto Perez reached second place with an infield single and a throwing error from baseman Brian Dozier. Rajai Davis pinch ran, but the Indians could not bring him home.

Greg Allen, promoted as the 26th man for this series, could not strike Davis in threes and then against the left Zach Duke. Brandon Guyer landed as the first Davis for the second out of the inning.

Francisco Lindor, the hometown hero of Tuesday's win, was next to Bat, but the twins deliberately led him. Kipnis followed with a drive into the gap in the left center, the center fielder Max Kepler in search of the third out.

Yonder Alonso started the twelfth with a single and was replaced by prize-runner Erik Gonzalez. He finished second in a wild field, but Davis could not put a pyre on him before turning left.

Gomes started the 15th with a double and Guyer was beaten in the batting helmet to runners in first and second place with anyone to put. Lindor, after he could not advance the runners with a money, struck out. Kipnis finished the inning by landing in a double game.

Jose Ramirez went to start the 16th but was stranded at second base. It could have been the worse show, as one can not sacrifice the Indians for too long

"We had some chances," Francona said. "We did not fire and it caught up with us."

The twins could finish it on the 12th. They had runners out on second and third with one, but Cody Allen knocked out LaMarre and Robbie Grossman briefly signed Lindor.

Carrasco entered the game allowing a run in the last 14 innings. The run came in the sixth inning in his last start when Detroits took out Leonys Martin with two.

The run is now in a run in its last 21 innings.

Before the game, Francona said that Carrasco likes to be in the heat. Well, it was 80 degrees to play time and Carrasco played as if he loved it.

"The atmosphere tonight was really good for both sides," said Carrasco. "Only one team will win, but we played good baseball tonight."

Dozier started the game with one and stole the second, but Carrasco retired from the next three strikes. He was responsible for the next six innings.

The twins put out two runners with one out in the fifth, but Carrasco knocked out Jason Castro and Dozier.

The Indians once threatened Berrios over seven innings. He only allowed three hits, beat five and did not do any dough.

Two of the hits came in the first inning. Thereafter, Berrios allowed a strike over the last six innings. He was just 16 retired.

There was nothing wrong with the Indians beginning their journey to Puerto Rico. Corey Kluber and Carrasco combined to allow a run in 13 2/3 innings with 13 strikeouts and seven allowed hits.

Lindor received the 2016 Latin MVP Award before the match. The prize was awarded by the Latin Association of Sports Journalists and Broadcasters.

The association waited to give him the prize so they could personally introduce him to Puerto Rico.

The Indians have a day off Thursday before opening a four-game series against the Orioles in Camden Yards on Friday night. Trevor Bauer (1-1, 2.25) will be the Orioles and right-handed Dylan Bundy (0-2, 1:40).