Students pour into the streets of Dhaka to demand safer roads 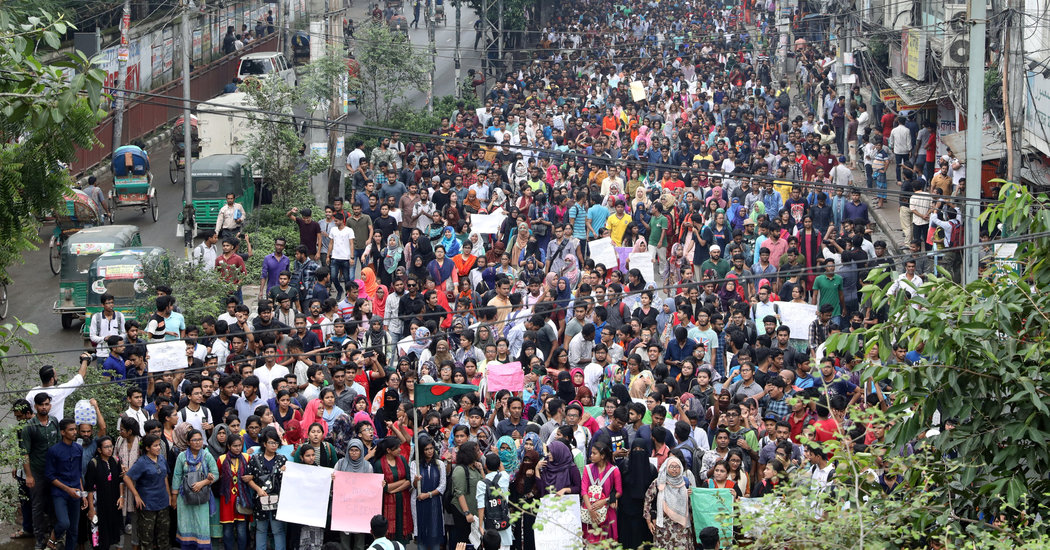 DHAKA, Bangladesh – Thousands of students paralyzed parts of the capital of Bangladesh on Sunday to protest the country's miserable road safety conditions. Teenagers in school uniforms set up checkpoints throughout the city, forcing police and government ministers to follow traffic rules that would otherwise be poorly enforced.

The protests in Dhaka, the capital, have begun their second week without any signs of weakening demonstrators calling for justice after two students were killed and 12 others injured when a bus broke into a bus stop on July 29.

The driver had lost control of his vehicle while picking up passengers on another bus. where dozens of poorly regulated private transport companies vying for customers. Nearly 7,400 people died in road accidents throughout Bangladesh last year, injuring another 1

The protests worsened on Sunday as university students joined the middle and high school students who led the movement. The new arrivals joined forces after a pro-government student union seized the ranks of the police on Saturday and attacked demonstrators and injured dozens.

This violence continued on Sunday when the student union took to the streets to help police use tear gas and batons to subjugate demonstrators. Armed with metal scraps and thick, gnarled branches, Protestant student protests began, and injured five photojournalists, including a photographer from The Associated Press. At least 200 people were injured during the protests.

The demonstrations were so far leaderless. Students gathered at their schools or universities in the morning before taking to the streets, blocking roads and setting up makeshift checkpoints around their respective facilities. In response, bus companies across the country have discontinued long distance service.

On some days, the protests attracted up to 15,000 students, and the parents left work to eat demonstrators with their children and restaurants for free.

Students' ability to organize and enforce poorly enforced laws has embarrassed the ruling Awami League party when it holds elections in December.

Control-level students have forced police and government officials to provide driver's licenses and cars. They have also helped alleviate traffic congestion by obeying Dhaka's driver – notorious for driving on the wrong side of the road or driving traffic lines.

"If children like us can establish discipline in traffic management, why does not the traffic police do it?" Said Tameem Dari Khan, who recently graduated from high school and is waiting for university. "Because they get bribes, they are not interested in checking out properly so they get an illegal benefit."

On Thursday, students asked a police sergeant on a motorcycle to show his license, which he refused. When the sergeant hit a boy, the students attacked him and set his motorcycle on fire.

Despite this episode, most interactions at the students' checkpoints were peaceful. A government minister driving in his motorcade was stopped at a checkpoint last week and then forced to drive in his security detail after his chauffeur failed to produce a driver's license. Students Passed Unlicensed Drivers to the Police

Although the government was reluctant to use violence at the beginning of the protests, the police's violent turn this weekend could encourage more students to come out, observers said. The ruling party has also blamed the opposition for fueling protests.

On Sunday, Interior Minister Asaduzzaman Khan praised the patience of the police, but added that the police would not continue to "stand by and do nothing".

"We will take tough action if the border is crossed," he said.

For many, the protests are much more than the dangerous road conditions of the country. They also symbolize bad governance and corruption throughout Bangladesh.

The student movement has demanded that the death penalty be imposed on the driver, who ran at full speed into the bus stop on July 29 and that the government enforces stricter traffic rules

Shipping Minister Shajahan Khan mocked the demonstrators during a press conference last Week. He pointed out that a bus accident in neighboring India had killed 30 passengers. He said "do not complain like us."

Mr. Khan is also the head of Bangladesh's powerful transport lobby, which activists say is a conflict of interest.

The transport sector has long operated beyond the law, with powerful officials who either own private bus companies or rely on their workers for political support. The bribery of civil servants gives hauliers licenses to employees who are often first-time drivers. They also bribe the police to escape from fatal accidents or to let their decrepit buses continue on commuter routes.

"The transport sector is absolutely corrupt," said Iftekharuzzaman, who has a name and is director of Transparency International

Internet speeds for mobile phones were also lowered over the weekend, leaving protesters with images and videos of their demonstrations not in social media or upload the messaging service WhatsApp.

The student protests accused the government of blocking freedom of speech. But Telecommunications Minister Mustafa Jabbar said in an interview that a technical problem prevented mobile operators from offering faster connections.

Other officials said the speed of the mobile Internet had been deliberately slowed down after rumors that the Awami League party had been arrested, killed and killed, raping several protesters in one of its Dhaka offices.

The rumors spread quickly in the social media and escalated violence in the capital on Saturday afternoon, to the climax, when several thousand students marched into the Awami League office. But they found no evidence that protesters had been illegally detained there and publicly dismissed the rumors as false to suppress the rage of the demonstrators.

"I think the mobile operators' problems are a blessing for all of us – otherwise we would get more rumors now," said Jabbar, the Telecommunications Minister.

If the government is behind the move to slow down the country's Internet, Bangladesh would be the third South Asian country of recent months to try to exploit the power of the social media to protect violent protests from escalation.