Sudan has come one step closer to full democracy. There are big obstacles 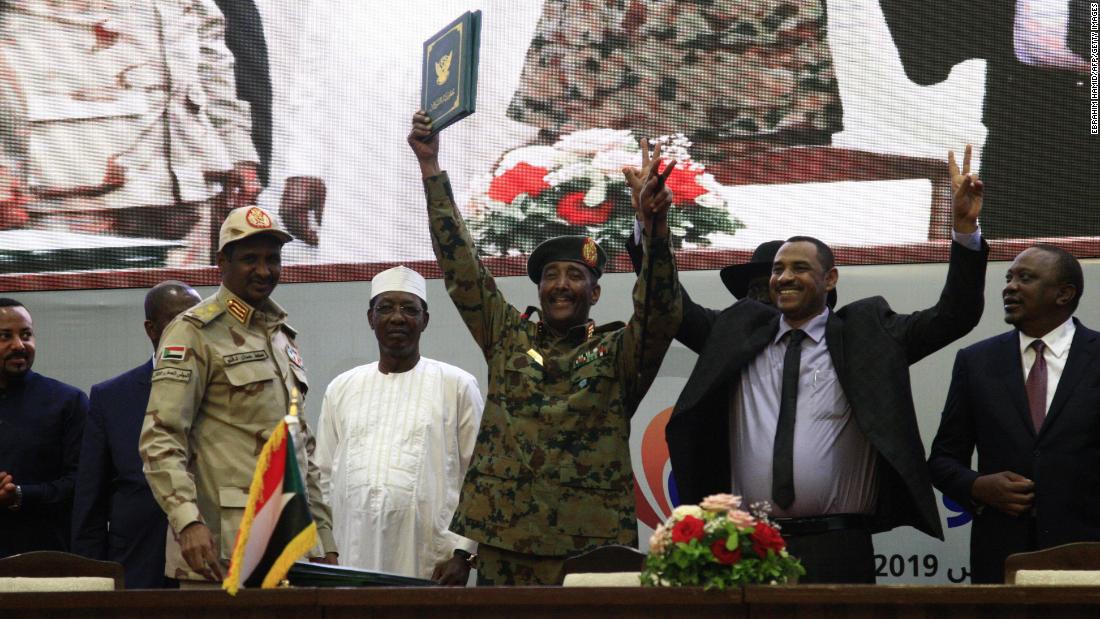 The election of a fearsome commander at the signing table and the absence of women who played a crucial role in the protest movement show that there are still obstacles in the way of Sudan's road to full democracy.

The agreement follows protests that overthrew 75-year-old dictator Omar al-Bashir and ended his 30-year reign over the country in northeastern Africa.
Under Bashir's iron grip, an entire generation grew up in the shadow of the war, where the danger of torture in infamous "ghost houses" was never far away and press freedom did not exist.

However, demonstrators continued to call for civilian rule and on Saturday thousands of people flocked to the capital to celebrate its historic signing.

The choice of signatories in the agreement on the division of power was full of symbolism.

The opposition – the Sudanese Professional (SPA) – proposed Ahmed Al-Rabee, a schoolteacher who earns around $ 33 a month, a symbol of the economic plight of professionals in the midst of institutional corruption in Sudan.

The dreaded commander, who was Bashir's former right-hand man in the bloody Darfur conflict, has persecuted numerous assaults on demonstrators – including on June 3, when more than 100 people were killed in front of the capital's headquarters.

When Hemedti left the signing, He was surrounded by protesters singing, "blood for blood, we will not accept blood money," CNN told eyewitnesses.

Hemedti has also provided Sudanese forces to the Saudi Arabian-led coalition fighting in Yemen. And the presence of Saudi Foreign Minister Adel al-Jubeir at the signing signals that the Gulf State of Hemedti will give in his homeland.

Saudi Arabia and the United Arab Emirates In fact, among the first nations to recognize the TMC rule, billions of dollars in donations were made to support the military, even as the protests continued.

The eagerly awaited signing was also notable for those who were not there. Sudanese women played a key role in the protest movement – estimated to make up to 70% of the demonstrators – and yet lacked signing of the agreement.
A CNN investigation found that this was a systematic attempt by soldiers to reach targets. Demonstrators who were taken to secret detention centers were photographed nude and, in some cases, raped.

"Revenge is not the way of this patriotic land," he said at the signing ceremony. "But it is time for the accountability of all who have committed oppression against the Sudanese people."

The FFC appointed Abdullah Hamadok Prime Minister of the Transitional Government on Thursday. Hamadok was a civil servant in the Sudanese Ministry of Finance in the 1980s before Bashir took power.

The position of Prime Minister is set for the transitional period of three years and three months. It is expected that Hamadok will be officially appointed Prime Minister on 20 August and sworn in the following day.

From Sunday, the TMC is to be dissolved and replaced by a new Sovereign Council, which meets for the first time on Monday.

For Sudanese the way to full democracy is still far away.

Correction: This article has been updated to reflect the transitional period of three years.

Nada AlTaher of CNN in Abu Dhabi, Vasco Cotovio of London and Sharif Paget of London Atlanta contributed to this report.