Syrian army wins in the southwest, rebels speak peace terms AMMAN / BEIRUT (Reuters) – The Syrian army seized more cities in the southwest on Saturday than air strikes on others who still resisted the rapid offensive, and rebels said they were negotiating the allied Russia. 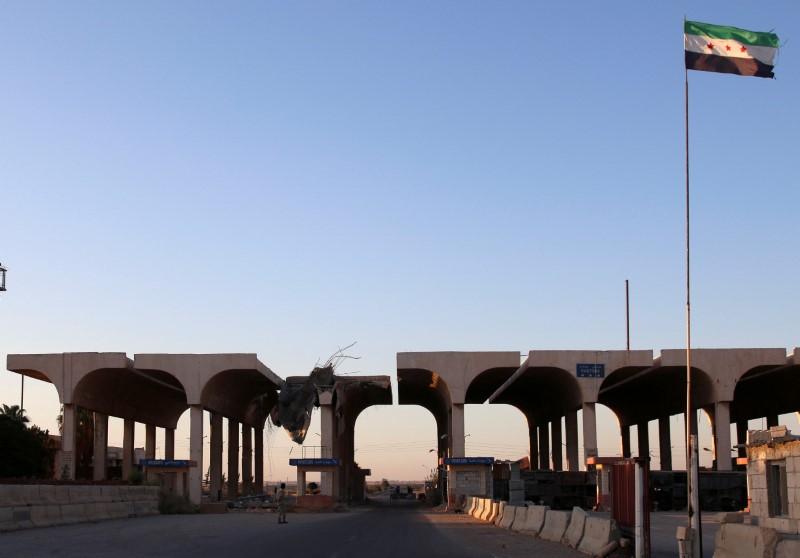 A Syrian opposition flag is deployed at the Syrian-Jordanian border at the Nasib junction in the province of Deraa, Syria, on August 27, 2017. REUTERS / Alaa Al-Faqir / Files

State television broadcast from the city of Dael, northwest of the city of Deraa after the army entered, and a war monitor reported that several cities farther east had also accepted government rule.

Rebels expected another meeting with Russian officers on Saturday to negotiate a deal for the return of Syrian state sovereignty across the entire Deraa province, a rebel spokesman said.

The airstrikes continued in the meantime, said the Syrian Human Rights Observatory on an offensive that drove 1

60,000 people out of their homes and threatened a humanitarian catastrophe, according to the United Nations.

Russia, the strongest advocate of the Syrian government, has supported the army's support of air strikes since joining the war in 2015 and has played a role in brokering surrender deals.

Southwestern Syria is one of the two remaining rebel strongholds, along with a region in the northwest sworn by Syrian President Bashar al-Assad to retake. He also wants to take control of territories in northeastern Syria, which are held by the US-backed Kurdish troops.

Southern-Western warfare could risk further escalation because of its proximity to Israel. The Israelis have already attacked the Iran-backed militias that are fighting on Assad's side, and who swore they were far from the borders of their country.

Insurgent negotiators and a spokesman said that a six-member Civil and Military Committee of the Southern Rebels held a preparatory meeting along the administrative boundaries of the neighboring province of Sweida.

"The committee held its first meeting with Russian officers who made their demands," said Ibrahim Jabawi, a spokesman for the central operating room set up by main groups of the Free Syrian Army in southern Syria.

But the Russian negotiators had not arrived a few hours after the start of another meeting on Saturday, Jabawi said.

The Russian negotiators demanded that the rebels accept conditions such as Ghouta's east, where insurgents either went with their families to the north-west opposition area or accepted the return of state power, Jabawi said.

The army has already conquered large parts of the eastern zone of the rebellious territory in the province of Deraa in less than two weeks of fighting, and several other cities that are still in the hands of the insurgents have reportedly agreed to join Settle Assad.

On Saturday, state television said the city of Al-Ghariya al-Sharqiya had accepted a "reconciliation" agreement with the government and that the national flag had been raised there.

It was broadcast live from the city of Dael, where a crowd was sung with slogans in support of Assad and the army.

State television said Friday that four nearby cities had agreed to spend their weapons and accept state rule. The army has gained control of the cities of al-Harak, Ibta and Rakham, a rebel said opposition lines in an area had collapsed.

The observatory said the Russian military police had entered several other towns and villages to end their rebellion against Assad.

Combat aircraft were reported to make 32 air strikes overnight when the offensive continued and hit nine cities in Deraa province. So far, about 100 civilians have been killed in air raids and shelling since June 19, it said.

Clashes escalated around the city of Deraa, which lies near the border with Jordan, and where army advances could cut the insurgent territory in the southwest into two parts, it said.