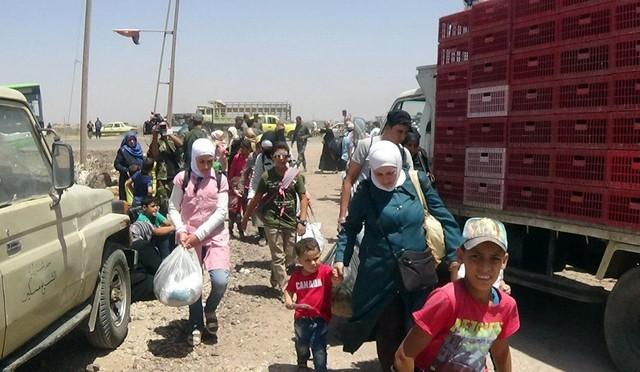 BEIRUT (Reuters) – A Syrian government offensive in the Southwest has uprooted more than 120,000 civilians and driven most of them toward the border with Jordan and the Israeli-occupied Golan Heights, a war observer group said Friday.

People leave as they drop their belongings in Deraa, Syria, in this leaflet released on June 28, 2018. SANA / Handout via REUTERS

A senior Israeli minister said that refugees gathering at the Golan border must be prevented from Israel. Jordan, which already hosts 650,000 Syrian refugees, also says its border with other refugees will remain closed.

The Syrian government forces, backed by the Russian Air Force, have concentrated on the rebel-held southwest since defeating the remaining remaining insurgents near the cities of Damascus and Homs.

Their progress in the areas east and northeast of the city of Deraa and the bombing of the densely populated rebel city of Nawa in the northwest has triggered a mass influx of civilians.

The Syrian Human Rights Observatory said tens of thousands have gathered on the Syrian border with Jordan, while thousands more have fled to the Golan border, many of them from Nawa.

In this handout issued on June 28, 2018, people gather alongside buses in Deraa, Syria. SANA / Handout via REUTERS

Observatory Director Rami Abdulrahman said on the phone that some people had also gone into government areas while others had gone to a corner of the Southwest held by a group affiliated with the Islamic State.

"I think we need to prevent the entry of refugees from Syria into Israel, in the past we have prevented such cases," said Israeli Energy Minister Yuval Steinitz, a senior minister, Tel Aviv Radio 102FM in an interview.

Reporting by Tom Perry in Beirut and Ori Lewis in Jerusalem; Arrangement by Kevin Liffey