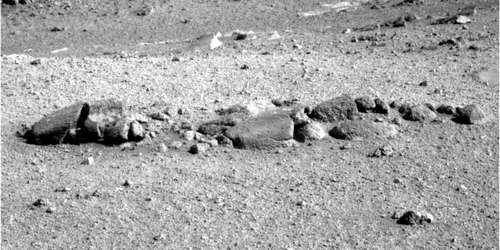 A UFO enthusiast from Waxahachie, Texas, finds the NASA Opportunity rover captured a skull and spine of a possible alien on Mars.

The enthusiast shared the UFO Network, which investigates and archives UFO sightings in the United States. The photo was taken on Sols 4986, which was Jan. 31 to Feb. 6, 2018.

The person who submitted the report to the UFO site says

To see the other weird things UFO.

Heather Leighton is a digital reporter at Chron.com. She considers herself as a Jack (ie) of all trades and covers of entertainment to politics . and follow her on Twitter at @loveheathernoel .