The 13th-century painting found in the French women's kitchen is being auctioned for $ 26.6 million 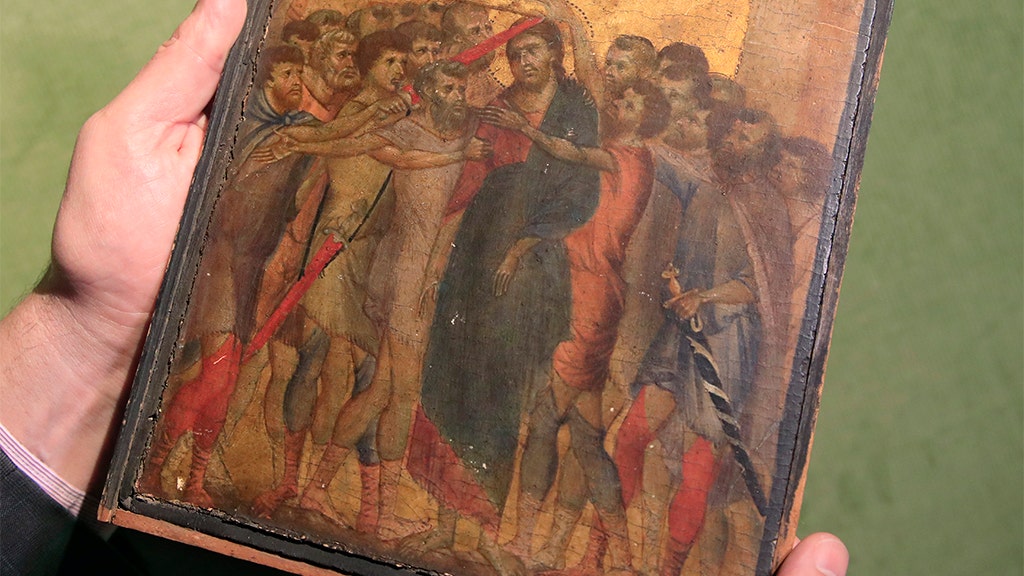 An old painting, found earlier this year in the kitchen of an elderly woman in France and intended to be a work of art by a 13th-century artist, made her a multimillionaire Sunday.

The work, a masterpiece entitled "Christ Mocked," attributed to the Italian painter Cimabue, was sold for $ 26.6 million (€ 24 million) to an anonymous buyer near Chantilly, north of Paris sold and is supposedly the most expensive medieval painting ever sold.

The expected selling price of the unsigned work was between $ 4.4 million and $ 6.6 million.

The painting of the Italian master Cimabue from the 13th century, which was on a photo last month.
(AP Photo / Michel Euler, file)

LONG-LAST PAINTING OF THE 13TH CENTURY FOUND IN WOMEN'S KITCHEN which is located in northern France, and recommended that they bring it to experts for evaluation. The painting, according to The Guardian, did not attract much attention from the woman in her nineties or her family, who considered it an old Russian icon.

The auctioneer Acteon, which sold the masterpiece to an anonymous buyer, said the woman would receive "the majority" of the sales money.

Dominique Le Coent of Acteon Auction House said the sale was a "world record for a primitive or a work before 1500."

"It is a painting that was unique, magnificent and monumental, Cimabue was the father of the Renaissance, but this sale goes beyond all our dreams," said Le Coent.

Art experts said the painting was probably part of a larger diptych painted by Cimabue in the 1280's. Two more panels were exhibited at the Frick Collection in New York and at the National Gallery in London. The Turquin experts in Paris reportedly used infrared reflectography to confirm that the piece was part of the diptych containing eight scenes of Christ's Passion and Crucifixion.

Cimabue, who allegedly taught the Italian master Giotto, broke off the popular Byzantine style of the Middle Ages and began to consider elements of movement and perspective that characterized Western painting. Only 11 wood-painted works, none of which are signed, were attributed to Cimabue, as The Guardian reported.

The painting hung on the kitchen wall of the woman's house for so long that she allegedly told the auction house that she could not remember how she came up with it.