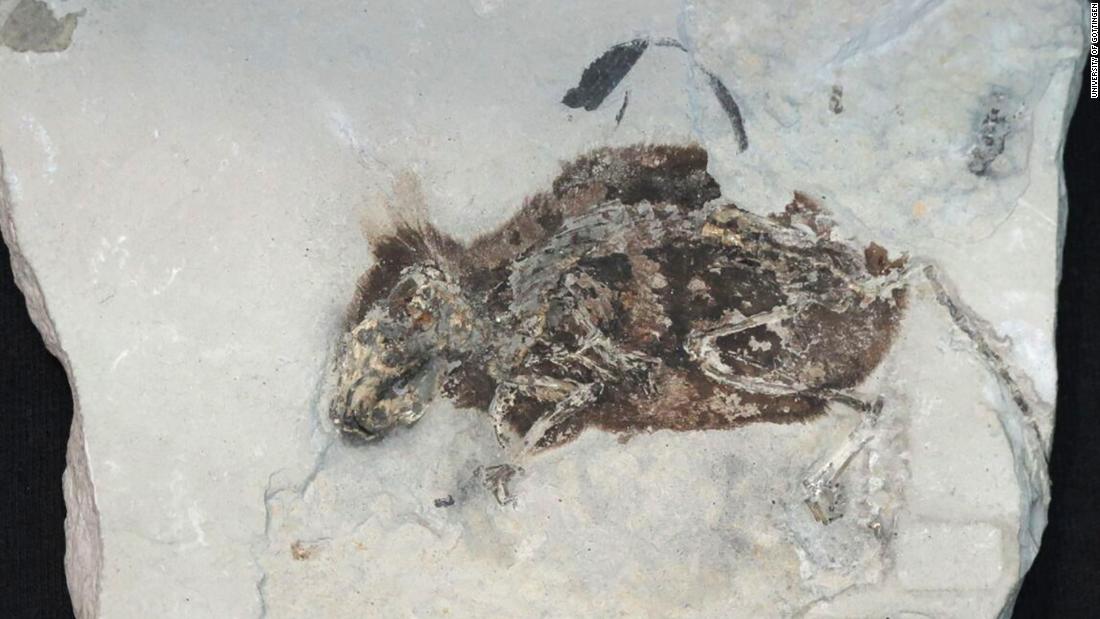 A mass grave from the year 5000 in Poland contains 15 persons, all from the same extended family.

This is an artistic representation of Ambopteryx longibrachium, one of only two dinosaurs with membranous wings. The fossil remains of the dinosaur were found in 2017 in Liaoning in northeastern China.

Reconstruction of a small tyrannosauroid Suskityrannus hazelae from the Late Cretaceous.

Researchers have studied archeopteryx fossils for 1

50 years, but recent X-ray data reveal that the bird-like dinosaur may have been an "active flyer".

A 160,000-year-old Denisovan jawbone found in a cave on the Tibetan Plateau is the first evidence of the presence of this ancient human group outside the Denisova Cave in Siberia.

An artistic depiction of Simbakubwa kutokaafrika, a giant carnivore that lived 23 million years ago. It is known from fossils of most of its jaw, parts of its skull and parts of its skeleton. It was a Hyänodont, a now-extinct group of mammalian carnivores bigger than a polar bear today.

The upper right teeth of the newly discovered species Homo luzonensis. The teeth are smaller and simpler than other Homo species.

The towering and battle-scarred "Scotty" is the world's largest Tyrannosaurus Rex and the largest dinosaur skeleton ever found in Canada.

Researchers discovered unknown species at the Qingjiang fossil site on the banks of the Danshui River near its river intersection with the Qingjiang River in Hubei Province, China.

During a study of the ancient Iberian population, the remains of a man and a woman buried together in a Spanish-Bronze Age site called Castillejo de Bonete showed that the woman was a native. The man's youngest ancestors came from Central Europe.

Durrington Walls is a late Neolithic settlement in Wiltshire. Pig bones recovered at the site showed that humans and livestock traveled hundreds of kilometers 125 million years ago for feasting and celebrating.

The artistic impression of a Galleonosaurus dorisae herd on a riverbank in the Australian-Antarctic Rift Valley during the early Cretaceous.

The remains of 137 children and 200 lamas were found in Peru in an area that was once part of the state culture of Chimú, which was at the height of power in the 15th century. The children and lamas may have been sacrificed by floods.

The tooth of an extinct giant ground sloth that lived in Belize 27,000 years ago showed that the area was dry and not the jungle that it is today.

Artistic representation of how the small tyrannosaur Moros intrepidus would have looked 96 million years ago. These little predators would eventually become Tyrannosaurus Rex.

Examples of tools made from monkey bones and teeth salvaged from the late Pleistocene strata of the Fa Hien-Lena Cave in Sri Lanka show that early humans used sophisticated techniques to feed monkeys and squirrels to hunt. [19659002] In the sand dune in the Catalan bay traces of Neanderthal man were found.

Two of the fossils discovered in Korea had reflective eyes, a feature still visible in the light.

An artistic depiction of Mnyamawamtuka moyowamkia, a long-necked Middle Cretaceous titanosaur found recently in Tanzania. His caudal vertebra has a unique heart shape that contributed to his name. In Swahili, the name means "animal of Mtuka with a heart-shaped tail".

The oldest proof of mobility is 2.1 billion years old and was found in Gabon. The tubes discovered in black shales are filled with pyrite crystals, which result from the transformation of biological tissue by bacteria into layers of clay minerals.

Recently, researchers investigated climate change in Greenland, as it was at the time of the Vikings. By using sea sediment cores, they found that it was actually warmer than previously thought. They studied at various locations, including a reproduction of Thjodhild's Church on Erik's Red Mansion, known as Brattahlíð, in what is now Qassiarsuk, Greenland, from the 21st century.

This is an artistic representation of the Antarctic 250 million years ago. The newly discovered fossil of a dinosaur relative, Antarctanax shackletoni, revealed that reptiles lived in various wildlife after mass extinction in the Antarctic.

Bone points and pierced teeth found in the Denisova Cave were dated to the Early Paleolithic. A new study establishes the timeline of the cave and protects the first known humans as early as 300,000 years ago.

The image of this artist shows a marine reptile, which resembles a platypus hunt at dusk. This duck-billed animal was the first reptile with unusually small eyes that probably needed other senses, such as the sense of touch of its duckbill, to hunt for prey.

Although difficult to detect, researchers found spots of lapis lazuli pigment, called ultramarine, in the dental plaque on the lower jaw of a medieval woman.

A Neanderthal fossil, left, and a modern human skeleton. Neanderthals often have high levels of trauma compared to modern humans, but a new study shows that head trauma was the same for both.

The world's oldest figurative artwork from Borneo was dated 40,000 years ago, when humans were living on the third largest island on earth.

A 250,000-year-old Neanderthal Child's Tooth contains an unprecedented record of birth, breastfeeding, disease, and lead exposures in the first three years of his life.

Illustration of an artist showing huge nocturnal elephant birds that are staying there the ancient forests of Madagascar at night. A new study suggests that the now extinct birds were nocturnal and blind.

Kebara 2 is the most complete Neanderthal fossil found so far. It was discovered in the Kebara Cave of Israel, where other Neanderthal remains were found.

The world's oldest intact shipwreck was found by a research team in the Black Sea. It is a Greek merchant ship that dates back to 400 BC. Was dated. The ship was surveyed by two distant underwater vehicles and digitally mapped.

This fossil represents a new Jurassic piranha-like fish with sharp, pointed teeth. It probably feeds on the fins of other fish.

The fossil skull of young Diplodocus, known as Andrew, in the hands of Cary Woodruff, director of paleontology at the Great Plains Dinosaur Museum.

Two small bones from the Ciemna Cave in Poland are the oldest human remains in the country. The condition of the bones also indicates that the child was eaten by a large bird.

The illustration by this artist shows the newly discovered dinosaur species Ledumahadi Mafube, which lives in the early Jurassic of South Africa. Heterodontosaurus, another South African dinosaur, is also in the foreground.

A 73,000-year-old red hatching pattern was drawn on a silicate flake made up of sand and gravel cements in South Africa.

These four dinosaurs show the evolution of Alvarezsauri. They contain typical Danilo goods, figulina and rhyta, which were used to store meat, milk, cheese and yoghurt. From the left, Haplocheirus, Xiyunykus, Bannykus and Shuvuuia show the lengthening of the jaw, the reduction of teeth and changes on the hand and arm.

Eorhynchochelys sinensis is an early turtle that lived 228 million years ago. It had a toothless beak but no clam.

The famous statues of the Easter Island, called Moai, were originally full-body figures that were partially obscured over time. They are important ancestors of the Rapa Nui and were carved after the founding of a population on the island 900 years ago.

Researchers stand in the archaeological site of Aubrey Hole 7, where burnt human remains in Stonehenge were retrieved to examine them. New research indicates that 40% of those who were buried in Stonehenge did not come from there. However, they may have been transporting stones from West Wales and helping with the construction.

The fossil of the newly discovered tank dinosaur Akainacephalus johnsoni was found in southern Utah.

The foot is part of the partial skeleton of a 3.32-million-year-old skeleton of an Australopithecus afarensis child, referred to as Selam.

The asteroid impact that caused the extinction of the dinosaurs also destroyed the global forests, according to a new study. This image shows one of the few bottom-dwelling birds that has survived the toxic environment and mass extinction.

The remains of a slaughtered rhino help researchers determine the date on which the early humans reached the Philippines. They found a 75% complete skeleton of a rhinoceros that was clearly slaughtered at the Kalinga archaeological site on the island of Luzon, with 13 of its bones showing cuts and sites where bones were struck to release the bone marrow.

This is just one of 26 people found on the site of a 5th-century massacre on the Swedish island of Öland. This teenager was found lying on his side, indicating a slower death. Other skeletons found in the houses and streets of the Sandby borg ring-fortress show signs of sudden death by blows to the head.

The skeleton of a young woman and her fetus were found in a brick coffin from medieval Italy. Her skull shows an example of neurosurgery and her child was extruded after death on a rare "coffin birth".

This part of a whale skull was found along with at least 19 others on the construction site of Calaveras Dam in California. Some of the pieces are 3 feet long.

A Stone Age cow skull shows trepanation, a hole in the skull produced by humans as a surgical procedure or as an experiment.

On the left is a fossilized skull of our hominid ancestor Homo heidelbergensis, who lived from 200,000 to 600,000 years ago. Right is a modern human skull. Hominins had pronounced brow combs, but modern humans developed moving eyebrows as their face became smaller.

On the left is a 13,000 year old footprint found in sediment on Calvert Island off the Canadian Pacific coast. On the right side is a digitally enhanced image showing details of the footprint.

A central platform at Star Carr in North Yorkshire, England, was dug up by a team of researchers investigating past events of climate change at the Mesolithic site. The Star Carr site has the oldest evidence of carpentry in Europe and works in the UK.

This wall with paintings is located in the La Pasiega Cave in Spain. The ladder shape of the red horizontal and vertical lines is more than 64,000 years old and was made by Neanderthals.

These perforated shells were found in the Spanish sea cave Cueva de los Aviones 115,000 to 120,000 years ago. Researchers believe these served as body jewelry for Neanderthals.

The earliest modern human fossil ever found outside of Africa was found in Israel. This suggests that modern humans have left Africa at least 50,000 years earlier than previously thought. The multi-toothed maxillary bone was recovered in a prehistoric cave.

This is an excavated structure on the northern edge of the Grand Plaza at Teposcolula-Yucundaa in Oaxaca, Mexico. The researchers examined a "Pestilence" cemetery, which was associated with a devastating epidemic between 1545 and 1550. A new analysis suggests that Salmonella triggered a typhoid epidemic.

Paranthropus boisei, an early human ancestor with a height of 1.80 m, had a small brain and a broad, bowl-like face. It is best known for its large teeth and strong masticatory muscles.