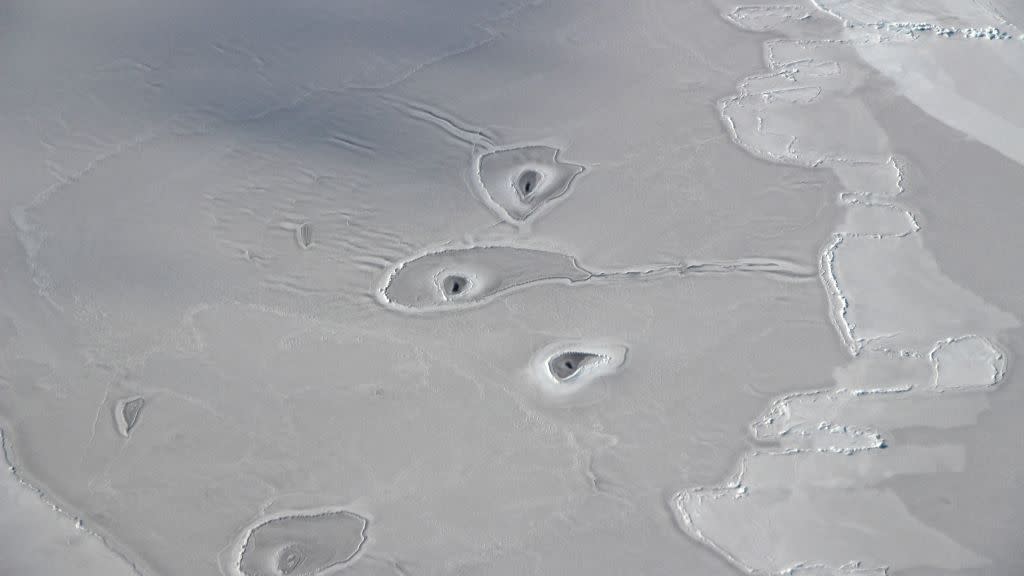 On April 14, a group of NASA scientists flew across the Beaufort Sea, north of Alaska and the Canadian border, when they saw something puzzling: three holes in the sea ice, looking like rings around them and some rippling ice to theirs left.

"I can not remember seeing such things elsewhere," said John Sonntag, a NASA meteorologist who took the above photograph, in a statement.

At first glance, it might look like the cool equivalent of the crop circles, but the scientists are pretty sure there is a simple explanation in this case. "My first guess is that they are sealed breathing holes," says Walt Meier, an atmospheric scientist at the National Ice and Ice Data Center focused on sea ice. It is well known that harp and ring seals make such holes in thinner Arctic sea ice and then repeatedly use these holes to get into the air.

For this theory to survive, there must be a good explanation for why sea ice is thin enough at this point to break the seals. Meier says these holes could be the result of warmer water coming from the nearby Mackenzie Delta, the shallow outflow of the Mackenzie River from the nearby Canadian coast. According to Meier, warmer water from the river flows into the ocean, and because warm water is less dense than cold water, it naturally floats to the surface on the surface.

This in turn dampens the ice on the coast's surface, and could have pulled seals in place as the marine mammals pick more points to breathe, where the ice is already thin. There are formations near the holes that look like waves, which, according to the scientists, could be the result of water swirling around the edges – a sign that warm water is rising through the holes.

By themselves, these holes do not tell us all about the Arctic marine environment. They are more spectacle than anything else, says Meier. But they point to a general trend in sea ice.

The photo above shows ice with a hint of "finger rafting" – that's when the wind pushes together two ice sheets that overlap like folded hands. The most likely explanation, says Meier, is higher Arctic temperatures. In the past – still in the 1980s – the sea ice in the region would be thick enough to withstand the southern winds blowing north at the beginning of winter. But in recent years, thanks to warmer Arctic waters, the ice tends to be less stable and more easily blown away by the wind. Then the exposed water freezes over the winter, but only to thin leaves.

These thin leaves are more likely to be blown together, creating the "finger-rafting" phenomenon, and due to warm warmth, they are susceptible to melting river water from the shores. "How often that happens and the scope of [this pattern] is much more than it used to be," says Meier.

It is impossible to combine this photo – just one data point – directly with climate change or warming Arctic waters. However, the photo suggests that future research in the region might find a trend towards decreasing ice over these waters (0.8em) – sm "type =" text "content =" Continue reading: The Arctic may be ice-free Have summer when the climate goals of Paris are exceeded by half a degree "data-reactid =" 39 "> Continue reading: The Arctic may have ice-free summers when the climate targets of Paris exceeded by half a degree

Sign up for the Quartz Daily Brief, our free daily newsletter featuring the world's most important and interesting news.