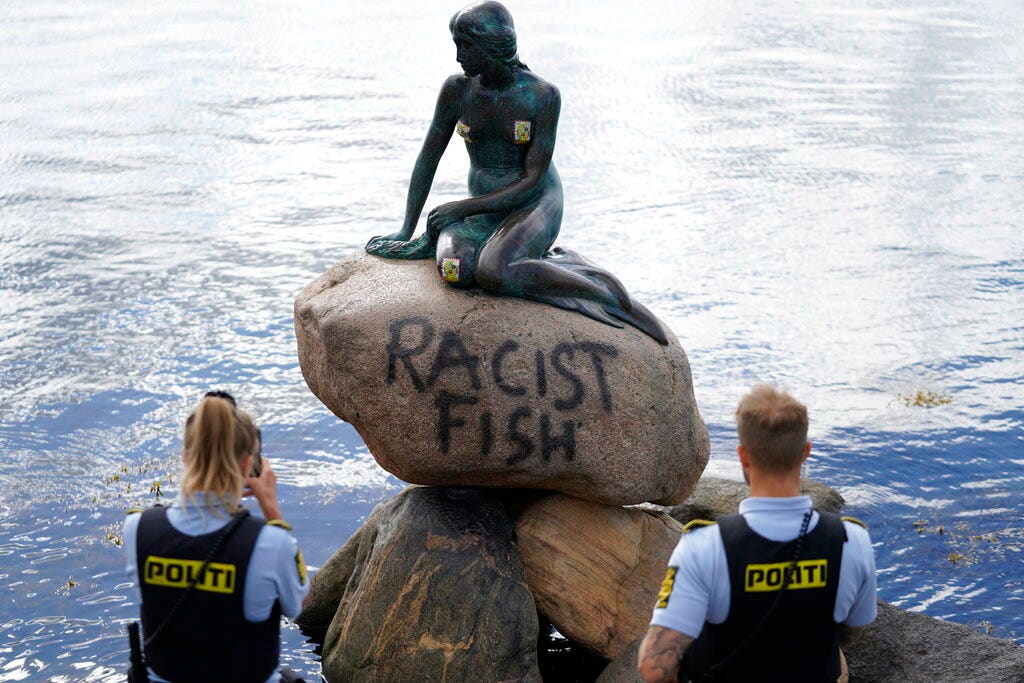 The famous statue of Hans Christian Andersen’s little mermaid, one of the biggest tourist attractions in Copenhagen, was destroyed with the text “racist fish”.

The words were marked on the stone on which the often attacked 1.65 meter high bronze sits at the entrance to the Copenhagen harbor.

Nobody took responsibility for the deed.

The statue was created in honor of the Danish storyteller Andersen. It has long been a popular target for vandals who have blown them up, beheaded and painted them.

The bronze is based on a mythical mermaid daughter of the sea king, who falls in love with a prince after the story of Hans Christian Andersen and longs to become human.

Police are standing next to the statue of the Little Mermaid in Copenhagen, Denmark on Friday, July 3, 2020, after being destroyed.
(Mads Claus Rasmussen / Ritzau Scanpix via AP)

Last month in Copenhagen, a statue of a Danish missionary, who was the key to colonizing Greenland, was doused with red paint and the words “decolonization”.

It was not known whether the two cases of vandalism were related. Statues and monuments around the world are being reconsidered in the face of race justice demonstrations after George Floyd’s death in Minneapolis.

Human rights defenders accused Danish officials of failing to recognize racism on Thursday after authorities said the murder of a biracial man by two white men was not racially motivated.