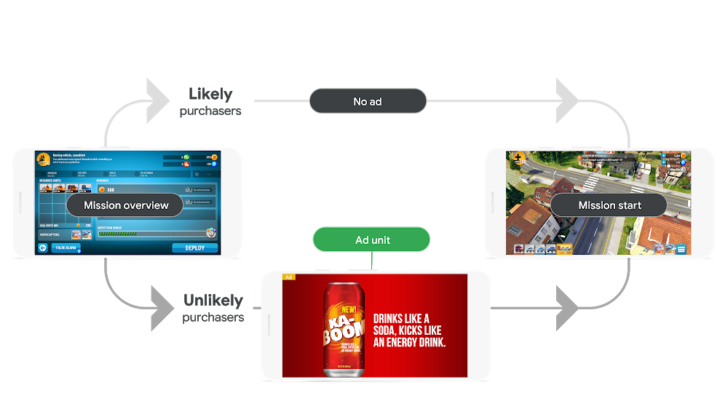 Nowadays one can easily be cynical with the games industry, the advertising and the general state of many consumer technologies. Google has decided to help Android game developers increase their monetization opportunities by offering them the opportunity to re-capture unfriendly gamblers and be happy in ad-free happiness. How could you ask? Two ways: Use ads to pull people back into a game, and Machine Learning to show ads only to those who find in-app purchases less likely.

Since there are actually two parts here, I start with the first part. Google wants to introduce ways in which game developers can re-acquire players who have left their games, as people who do not play obviously do not spend money. The proposed solution for this is to show ads to those who have installed and given up a specific title at a certain time. This could be used to inform people about new features or to encourage them to re-engage with them. Google even mentions using these ads to convince people to try the game for the first time, with the blog post implying this through instant apps.

In addition, Google also suggests machine learning to separate players from likely buying IAPs and those who are not. With this information, the developer can display ads for the latter group while leaving the first group alone (not to annoy them).

"One way to increase overall revenue is through ads, but some developers are worried that ads are these ads. In-app revenue could be impacted by disrupting gameplay for gamblers spending money

"For smart segment ad units, ads will appear only to users who are not expected to spend on in-app purchases. Players who are predicted to spend will not see any ads and can just keep playing. "

That makes me feel uncomfortable, especially as I see what Google is trying to do, and in the end, it makes the most money when game developers are constantly pulling in money, not by satisfying the players' gamer. "unlikely" segment would not necessarily know that they see advertising, while their friends who buy IAP are not, but it does not, which makes it less manipulative.

It's not as bad as Activisi's insidious patent of a few months ago, but in some ways it does not seem to be too far, but Google already gives developers the opportunity to try it out. So it's not a pure concept or patent, and I would not be surprised if we saw this sooner or later .