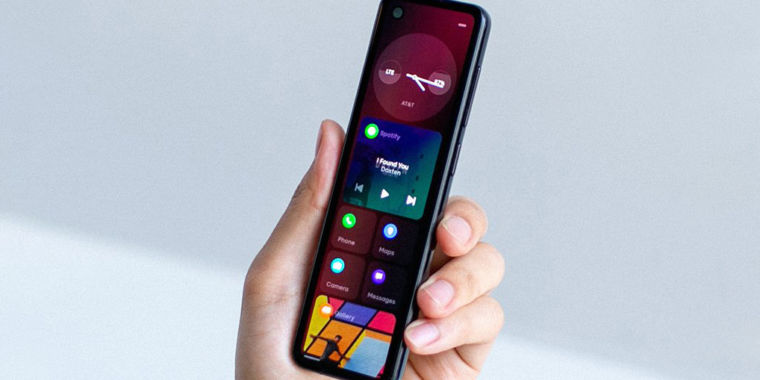 Believe it or not, Essential seems financially solvent enough to bring out another (one last?) Smartphone. Although there was no identifiable income since the Essential Phone flop in 2017, the continuation of the Essential Phone has been discontinued, the Smart Home device discontinued, the sale suspended, 30% of employees dismissed, and Founder and CEO Andy Rubin appointed Stained by a sexual scandal, Essential is still there somehow. And hopefully, you'll forget everything while teasing a shiny new smartphone on Twitter .

Meet "Project Gem," a large, ultra-thin smartphone with an aspect ratio close to that of a TV remote. It looks like it would happen if you took a normal smartphone and halved it vertically. The front is fitted around the phone with a uniform aperture. In the upper left corner is a pinhole camera. On the back there is a considerable camera shot for the one-lens camera and an incision for your finger, which may be a button, a fingerprint reader, or both. The color scheme definitely lives up to the name "Gem," with four versions each having a different shiny, color-shifting finish.

It must be assumed that Android will run on any phone, unless otherwise proven, but boy, this does not look like normal Android. We assume the hero image includes the splash screen, which displays a clock widget, a music widget, and apps icons in a 2×2 tile grid, making it look a bit like Windows Phone. The home screen design may seem preferable to display apps as square widgets with some information and functionality instead of app icons. The Spotify widget displays music controls, the gallery shows an image preview, the calendar shows your next appointment, "Maps" shows a map of your current location, and we assume that the weather widget shows a weather forecast. It's different, but it also looks quite scroll-heavy, with only four widgets needed to fill the screen.

Regarding a system-level UI, there does not seem to be much to show things like system navigation buttons, time, your mobile coverage, or notifications. How does this work with Project Gem? The only universal UI element seems to be a small button with a horizontal line in the upper right corner. What does it do? There may also be a "back" button in the far corner next to the camera.

All the evidence we have had so far about the Gem Phone, indicating that this is an Android phone without access to the Play Store and Google Apps. XDA developers found that Essential employees and Android commits referred to this "gem" phone. In one of the attached screenshots, the build string "gem-q-microg-userdebug MICROG.QP1A.190711.020" was displayed. You can select a few bits of data from this string (running Android 10 and created on 07/11/2019). The big news is that this build is running "MicroG," an open source redeployment for Google Play Services. MicroG was designed specifically for devices without Google apps and services, so apps that use proprietary Google APIs can run on non-Google devices. The Gem phone runs an Android branch.

MicroG is mainly available as an open source project for home makers who want to create an all-open source version of Android. It has never been tested in a commercial product, and the Github side of MicroG describes itself as "alpha software that is not yet ready for production." The lack of a true app ecosystem explains why many apps look so generic. The only two brands on the phone are Spotify and Uber, and both services have web apps.

Without Google Maps, Essential seems to be rolling its own map app. The app, prominently featured in one of the five pictures, is called "Maps" with a positive generic blue icon. The mapping data is in line with OpenStreetMap, and the app design and iconography are not consistent with the market. It also looks like live traffic data that Essential needs to license from a vendor.

How input would work on a device like this is unclear. A normal keyboard would be almost useless on such a thin display. In a Bloomberg report from 2018, it was said that Essential's next phone "had a small screen and that users had to interact mainly with voice commands in conjunction with the Essential Intelligence software from Essential."

Bloomberg has definitely understood the part "small screen" Maybe the primary input is the voice? XDA has found references to a "fingerprint walkie-talkie" mode. Therefore, the divot on the back panel may be a fingerprint reader, and you press it when you want to enter a voice command.

The watch also contains an AT & T logo. Does that mean that AT & T is a startup partner, or is that just a model? The only US carrier partner of Essential Phone was Sprint.

That's it for Essentials Project Gem, a phone that raises a whole range of questions, with some very worrying answers. Will you really be able to write and use apps on such a thin smartphone? Does anyone want a smartphone without app in 2019? Do you want to talk to your smartphone all the time when voice input is the primary option? Will this phone be another commercial failure and will a second failure be the death of Essential?

According to Essential, "it is expected to release more information in the near future."