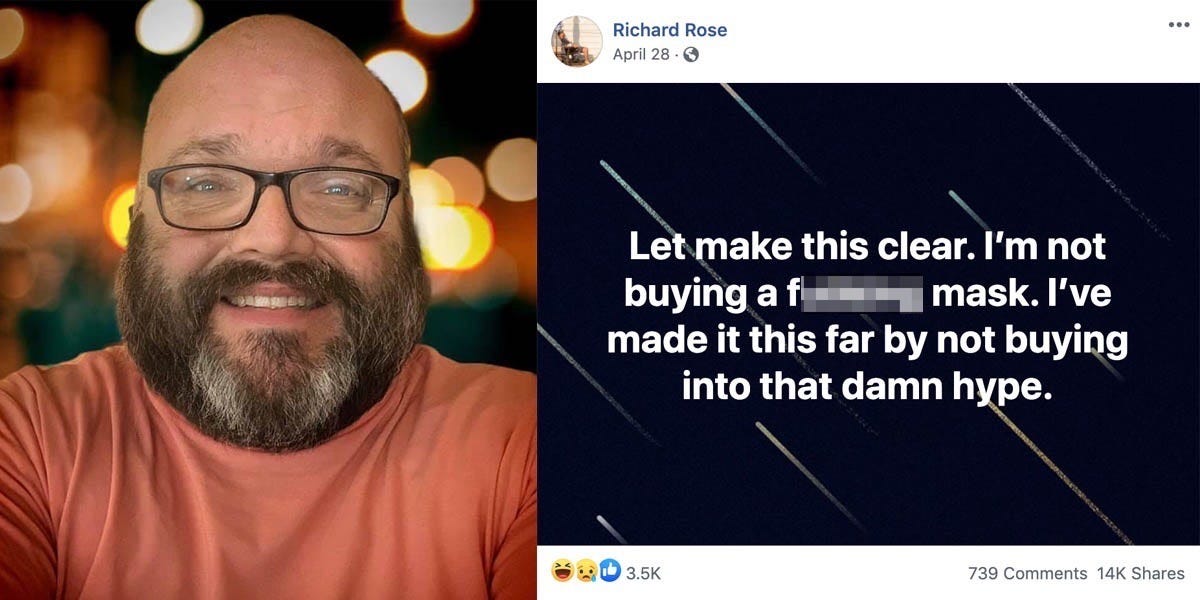 Richard Rose, a 37-year-old man from Port Clinton, Ohio, recently died of a corona virus after sparking “hype” about the pandemic on Facebook.

Rose’s death has garnered online attention due to his public Facebook posts supporting President Donald Trump, criticizing Black Lives Matter protesters, joking about rape and accusing Democrats of spreading false information about the pandemic to “manipulate” it “Elections in your favor. “

A tweet that compiles a slide show of Rose’s posts and asks people to “watch how this goes” has garnered almost 150,000 likes.

“Let’s make that clear. I’m not buying a mask. I’ve made it this far by not getting involved in this damn hype,” Rose wrote on April 28.

On May 12, he wrote that he was “tired of seeing” s — about COVID, “and on May 18, he published an Islamaphobic meme comparing a niqab to a medical mask.

In June, Rose “checked in” on Facebook in Ohio bars and restaurants.

On July 1, Rose wrote on Facebook that he had symptoms of COVID-19.

“I’ve been very sick for the past few days,” he wrote. “I was finally wiped this morning. I should know soon what the results are. I just want to feel good again!”

Just an hour later, Rose announced that he had officially tested positive.

“Well. I’m officially quarantined for the next 14 days,” he wrote.

The next day Rose wrote: “This Covid is shit! I’m so breathless if I just sit here.”

“We were overwhelmed, you know? You hear about this virus and don’t expect it to affect people, younger people like us,” said Nick Conley, Rose’s friend, to Cleveland 19 News.

“It’s terrible that we lost Rick, but the more tragic part of it is who got infected because of the actions he chose,” said Conley.

However, he also regretted that Rose’s Facebook posts were spread online.

“Rick is being slaughtered online because he chose not to wear a mask, and that’s not true,” said Conley. “We should still be compassionate about whether we agree with someone’s beliefs or not. Someone has died and we should have some compassion for it.”

Do you have a personal experience with the corona virus you want to share? Or a tip on how your city or community is dealing with the pandemic? Please send an email to [email protected] and tell us your story.