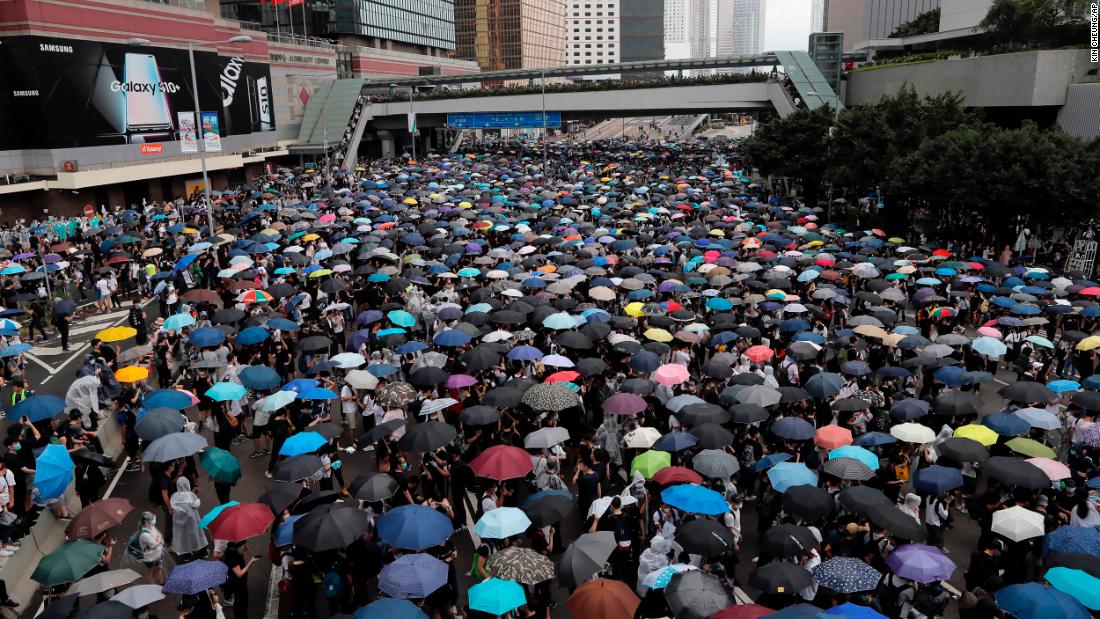 The police and government were completely out of place on Wednesday morning when thousands and tens of thousands of predominantly young protesters surrounded the city government's headquarters – known as the Legislative Council – to block roads and prevent lawmakers from working.
Despite the large participation and opposition in a broad spectrum of society, there seemed to be little that anyone could do to stop it. Protests were expected on Wednesday, but more as an expression of anger and disappointment than as an effective blockade.
However, the young demonstrators, most of them in their teens or in their early twenties, had different ideas. By noon, the protest had turned into a reissue of the 2014 Umbrella Movement.

"(This) amounts to a demonstration of popular power in Hong Kong, a demonstration in particular of the youth power," said the opposition legislator Claudia Mo told the tens of thousands who had gathered in front of the building of the Legislative Council.

"At the end of the Umbrella Movement, we did not say we'll be back and now we're back!"

With authorities forced to cancel the legislature on Wednesday and thousands still on the streets, Mo and other opposition legislators have called on the government to defer the bill instead of risking escalation into violence.

Even some proponents of the changes in the law have criticized the speed with which chief executive Carrie Lam tries to circumvent the normal procedure.

Before Carrie Lam announces that the extradition law will be shelved, we will not leave here, "said Shum Tsz-kit, convener of the Civil Human Rights Front, which organized the march on Sunday." We're calling for larger companies and larger ones Organizations to support the strike so that all of Hong Kong can tell the world that we are against the extradition law. "

After a tense but peaceful Tuesday night, when thousands of demonstrators gathered around the building before the Legislative Council meeting, it was unclear what If there was anything protesters could do, to overcome the impasse, in the midst of a huge police presence.

The police, however, concentrated to block the entrances to the Legislative Council complex itself, or had either not had the resources or expected to prevent tens of thousands of demonstrators from flocking to the streets.

They did so in large numbers after a mass text message had been sent to a core group of protesters at 8 am, leading others to the main highways that passed the Legislative Council building with makeshift barriers and coordinated calls, megaphones, and telephones Walkie Talkies.

In less than 10 minutes two major roads – Harcourt and Lung Wo – were closed to traffic. Attempts by the police to push them back were unsuccessful, and they quickly withdrew, with the exception of those who had been assigned to guard the entrance to the legislature. The demonstrators erected large barricades with the fences to keep them away, reinforcing them with cable ties and unrolled umbrellas.

Tense, angry scenes in which the police used pepper spray several times dissolved into a relaxed atmosphere as it was announced that lawmakers would not discuss the bill on Wednesday, and the demonstrators reveled in a victory few people considered possible held.

Along the main thoroughfare Harcourt In the traffic-free pedestrian zone felt like being back in the Umbrella movement.

Thousands of demonstrators chatted cheerfully and occasionally joined triumphant songs. Around noon, many office workers from the surrounding Admiralty buildings joined them.

During the umbrella protests, the main camp of the Admiralty became a kind of tourist attraction. Many workers regularly had lunch among the demonstrators, students There, artists and educators do their homework and give presentations and lectures.

Several unions and some 350 small businesses have called for work breaks in protest against the law on Wednesday, although most on the streets appeared to be high school or university.

The size of the crowd and the degree to which they have submerged pose a major dilemma for the government and the police. Apart from incredibly stubborn tactics that could trigger an even greater backlash, it is unclear what the police could do to clear the streets.

During the Umbrella Movement, the demonstrators held the Admiralty for several months before the numbers and support had decreased enough for the police to go in and evict them.

These protests started in September 2014, and their fifth anniversary is fast approaching. With protesters promising to stay on the streets until the bill is shelved, Hong Kong could experience another summer of discontent.

Ben Westcott and Eric Cheung of CNN contributed to the coverage.