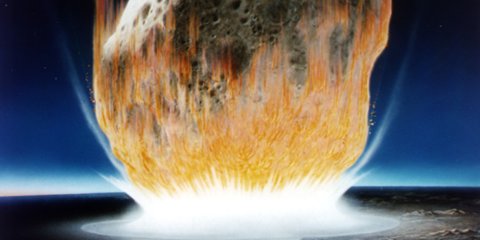 Scientists have long believed that an asteroid that struck Earth 66 million years ago contributed to the extinction of the dinosaurs.

But there are countless theories about what exactly happened to our planet and its prehistoric inhabitants after the impact. Some explanations for the disappearance of the dinosaurs blame the debris and soot clouds that extinguished the sun and cooled the planet, while others claim it is harmful gases from worldwide volcanic eruptions or even a major plague.

According to a recent study in the Proceedings journal of the National Academy of Sciences, global cooling was the culprit. On impact, the Chicxulub asteroid ̵

1; which was more than 10 km wide – triggered forest fires that stretched for hundreds of kilometers, triggered a kilometer-high tsunami and released billions of tons of sulfur into the atmosphere. This gaseous haze blocked the sun, cooling the earth and damning the dinosaurs.

The dinosaurs fried and froze, said Sean Gulick, lead author of the study, in a press release.

Investigation of the Chicxulub Crater

To better understand what happened on this fateful day in the history of our planet, the scientists behind the new study studied the Chicxulub impact crater in depth – a challenging feat, as the crater extends to the depth of 19 km the Gulf of Mexico.

In 2016, Gulick and his colleague Joanna Morgan collected rock samples from part of the crater, where rock and debris were deposited immediately after the impact of the asteroid. So far, no stones from this area have been promoted.

Over the next three years, Gulick and Morgan analyzed the samples to geologically reconstruct a timeline of post-impact events.

"This is an extended record of events we were able to recover within Ground Zero," Gulick said.

The asteroid struck with the power of 10 billion atomic bombs

The timeline showed the following:

Within a minute of the impact, the asteroid drilled a hole that was nearly 100 miles wide into the seafloor, causing it to collapse Bubble pit of molten rock and hot gas. The contents of this fiery cauldron shot up, creating a mountain-high cloud.

The cloud collapsed within minutes and solidified into rippling peaks of lava and rocky material. These peaks were then covered by more stones, traces of burnt land and charcoal, which were transported there by the ocean waves.

The presence of charcoal is evidence, according to the researchers, that forest fires were inflamed after impact. Some of the fires probably started hundreds of miles from the impact crater.

The authors estimated that the strength of the asteroid corresponded to 10 billion atomic bombs used in World War II.

The space rock would have evaporated the surrounding land and ejected ocean water from the impact site at the speed of a jet plane, Gulick said. This water formed a tsunami hundreds of feet high, possibly reaching into present-day Illinois before retiring.

Gulick told Newsweek that the space rock had penetrated more than 19 kilometers per second, so even dinosaurs 1,000 kilometers from the point of impact were unlikely to live long before the heat reached them.

"Within 1,500 kilometers, you would have seen very little before burning," he said.

The impact released billions of tons of sulfur into the atmosphere.

Dinosaurs were not the only creatures extinct after Chicxulub's strike. Flying pterosaurs and marine predators such as Mosasaurs and Plesiosaurs disappeared as well as 75% of life on the planet.

Of course, many creatures died near ground zero, but the mass extinction associated with the asteroid was probably a consequence of what happened after the impact in the atmosphere.

According to the Gulick team, the impact vaporized sulphurous rocks and released a haze of gaseous sulfur in the air that extinguished the sun and cooled the planet.

The scientists came to this conclusion because the samples they excavated contained much sandstone, limestone, and granite, but no sulfur-rich rocks, although the rocks near the impact site should be filled with sulfur. They estimated that at least 357 billion tonnes (325 billion tonnes) of sulfur gas were released into the atmosphere.

For comparison: The eruption of the Krakatoa volcano in 1883 spewed about a quarter of sulfur into the atmosphere as a dinosaur-destroying asteroid. And this volcanic eruption cooled the earth by 2.2 degrees Fahrenheit for five years.

The effects of the Chicxulub asteroid almost certainly lasted much longer than those of Krakatoa, Gulick said.

In the case of Chicxulub, he told Newsweek: "Global temperatures would drop when a sulfate aerosol haze surrounds the planet."

"The Earth would probably not look like the familiar blue marble from space," he added, "and it may take two decades to become completely clear again."

“Meteorites are coming”: Pastor speaks of “apocalyptic fireballs” while the asteroid flies to earth