The Trump economy half a year after the tax cuts

If you wake Stephen Moore in the middle of the night, he'll probably be the first to call tax cuts! In the idea of ​​Moore and his friend and business adviser Larry Kudlow (whose economic predictions are rather funny), tax cuts are the magic elixir that will boost growth.

Both men were involved in advising the Trump campaign and Kudlow became the director of the National Economic Council under Trump. In their capacity as election campaign consultants, they argued for massive tax cuts and this would increase economic growth to 4%.

So it's not surprising that Moore is happy now, and in fact it shows. He recently wrote an article in the Investor Business Daily titled "The State of the American Worker ̵

Moore rightly argues that this is the best job market for decades, as the unemployment rate is at 3.8% -decade low. Indeed. However, he seems to attribute this to recent tax cuts:

Several Democrats on the committee repeatedly condemned the Trump tax reform as "tax fraud" for the rich. That was a good sound a year ago, but do they still want to stay with that message today when about two thirds of Americans classify the economy as "good" or "big"? This is called leading the chin.

That's a bit strange. These tax cuts did not materialize until this year, and while we could have expected a bit of an imminent boom, driven by bourgeois demand and optimism and expectations of more money, not to mention share buybacks and higher investments. So far this does not seem to be the case.

The third revision of GDP data for the first quarter came out Thursday morning, and although it showed solid growth of 2%, it was actually downgraded. If these tax cuts are effective, this is not yet visible in the numbers.

If you look at the job market yourself, there is much reason for satisfaction, but what is not obvious is that job creation is accelerating, from CNBC: 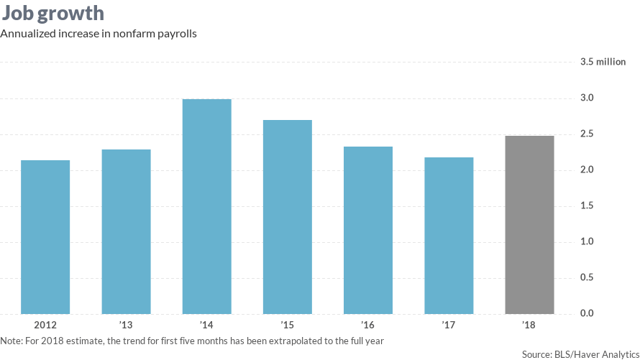 Now, job creation in 2018 is very good this year, but for example, it's not as good as 2014 and not really an outlier in terms of the trend since 2012 [19659008] And as the author of this CNBC article rightly noted, in 2014, few people argued that we were in the "largest economy in American history and the best time ever to seek a job!" As president lived tweeted just recently (see the affiliated CNBC article), least of all the president himself.

At that time, this employment statistic was manipulated and real unemployment was about like 52% and Obama killed Jobs with his war on coal and Obamacare [WellthisisofcourseacampaignoutcryfromacandidatewhoseemstolikealittleexaggerationbuttheessentialthingisthattherereallyisnotatrendchangeintheUSeconomy'sperformanceatleastnotandyetnotonthejobmarket(byWashingtonPost): 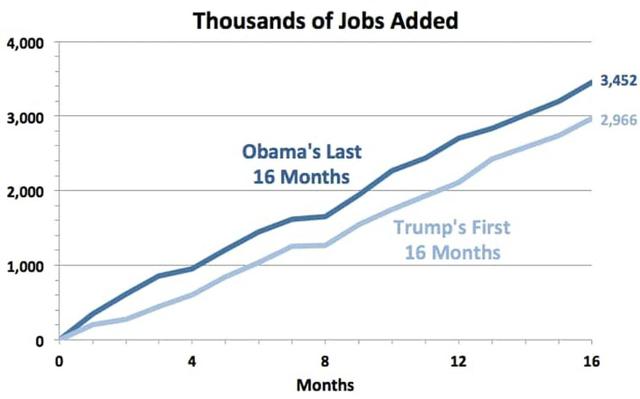 This turnaround could still come; Moore cites some interesting tidbits:

Last week, the national association of manufacturers noted that 95% are optimistic about the future. More than 4 out of 5 respondents said they are planning new investments because of the tax cuts. Wow!

Well, that would be nice, but we're not sure if "wow" is appropriate here, especially by Moore. The whole purpose of these tax cuts is to increase business investment (especially in Moore's economic universe); It would be terrible if the companies did not invest.

But current economic research is not exactly encouraging. Not to cut prime rates, here is the venture capitalist Hanauer:

[B] other labor supply and savings and investment are relatively insensitive to tax rates, "conclude CRS researchers in a report, while a Brookings report from 2014 data from 1945 until 2010, it emerged that "neither the top tax rate nor the top tax rate on capital gains correlate statistically significantly with the growth rate of real GDP."

And indeed, the evidence corroborates this: Clinton raised taxes and the economy boomed, Bush lowered them the early 2000s and the economy did not start to rise, and the recovery after the financial crisis was certainly not derailed (in fact, on the contrary, after these tax cuts expired) 19659016] And we do not even mention the derailed experiments with the tax cuts in Kansas, which went terribly wrong and tei It may even have to be reversed. Moore also argues:

The great American work ethic has not been lost, but it has been eroded by years of stupid government policies that could and should correct Trump and Congress.

This link in the quote refers to an article from Timothy Doescher, who argues:

April's very positive labor market report supports the idea that growth-enhancing measures are the best way to create more jobs and attract more people to win the occupation. In April, the US economy added 164,000 jobs (slightly less than the experts' predictions), and the unemployment rate reached its lowest level in over 17 years at over 3.9 percent. That's less than 4.8 percent when President Donald Trump took office.

Doescher argues that the growth-promoting policy was responsible for the very positive April job report. This is quite strange on two accounts: