The typhoon lands in Japan and approaches the disaster areas 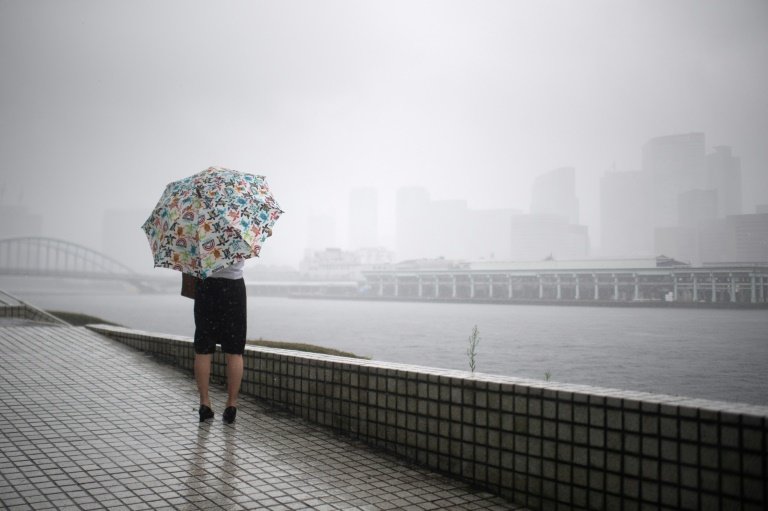 A strong typhoon arrived in central Japan early Sunday, causing local authorities to issue evacuation orders, with western areas recently devastated by floods and landslides in the crosshairs of the storm.

Typhoon Jongdari, which caught winds of up to 1

80 kilometers per hour, landed at 1 am (1600 GMT Saturday) in Ise, Mie Prefecture, according to the state television network NHK.

The storm, which had already dumped torrential rain over eastern Japan, moved westward and maintained its strength, reported the Japan Meteorological Agency.

Television footage showed high waves shattering in Shimoda, southwest of Tokyo, on rocks and dikes on the coast shattered by a strong wind and heavy rain.

A man was reportedly missing in Kanagawa Prefecture near Tokyo after several vehicles, including an ambulance, were stranded on a rippled sea road.

The storm is expected to hit the western Chugoku area later on Sunday, when record rainfall this month triggered floods and landslides, killing around 220 people and leaving over 4,000 survivors still in shelters

The agency warned of heavy rains, landslides, high winds and high waves and called on people to consider premature evacuation.

The western city of Shobara in Hiroshima Prefecture issued an evacuation order to approximately 36,400 residents, including 991 who were in desperate need of evacuation, said officials.

"We urgently urge residents to take action before the typhoon hits the region," said Masaharu Kataoka, a city official

Further evacuation orders and recommendations were issued in western Japan, including Kure in Hiroshima Prefecture, where around 6,380 people were evacuated, according to press reports.

In Japan, evacuation orders are not compulsory and people often stay home, and are later trapped by rapidly rising water or sudden landslides.

"There will be a double blow," a resident of Okayama told the NHK public broadcaster, referring to the recent killer rain and the incoming typhoon.

We are seriously concerned, "he said.

More than 410 domestic flights have been canceled so far because of typhoon Jongdari, while ferry connections between Tokyo and the surrounding islands have also been canceled due to high waves, news reports said.

The floods in the Chugoku region have been Japan's worst weather-related disaster for decades, and many residents of the affected areas still live in shelters or damaged homes.

"We are ready to evacuate 24 hours a day," locals said, "Tadahiko said Mizushima, an official from Okayama Prefecture in Chugoku told AFP.

"We pay particular attention to the areas where the restoration of the riverbanks started, as it was the first heavy rainfall since the disaster."

Civil servants are particularly cautious after the deadly rains because many people evacuate did not heed and fell into the trap. Some critics said the orders had been issued too late.

"We fear that people will not be able to block evacuation routes due to strong winds or floods," said Hiroshima Governor Hidehiko Yuzaki to journalists.

People who need to be evacuated in advance to save their lives, "Yuzaki said.

Japan is now in typhoon season and is regularly hit by major storm systems in the summer and fall.