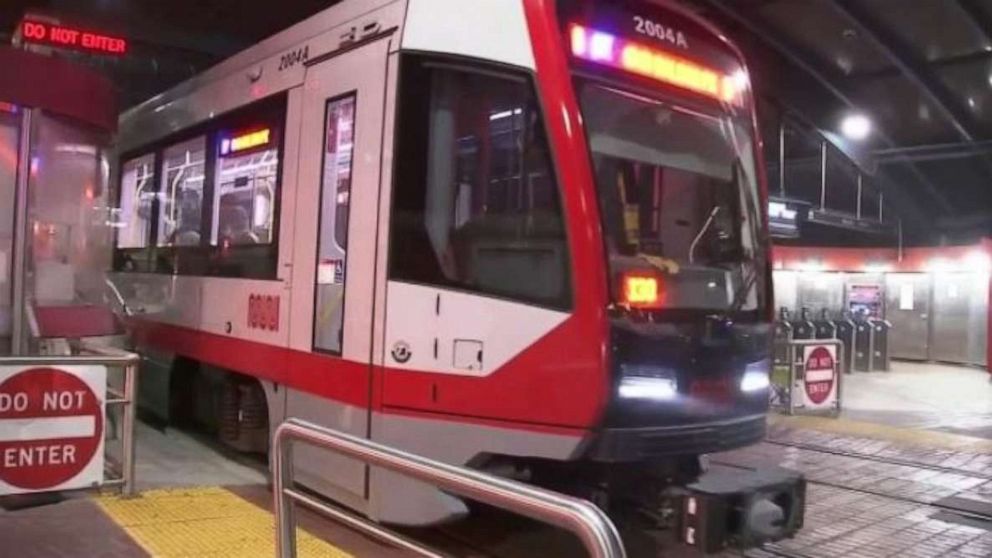 San Francisco officials promise a full investigation after a frightening video was released in which a woman ran her finger into a closing train door and was pulled onto the tracks under the train.

In the surveillance video, the woman is seen walking down the stairs at the city's Embarcadero Station on April 12 as she tries to get on the Muni train while the doors close. It seems her hand is in the door when she closes. She can be seen talking to an employee standing on the platform only a few feet away, but the train is moving and it is being pulled off the platform and under the train.

The woman was reportedly injured but officials did not say how serious she is.

The video was first acquired by the San Francisco Examiner.

"The door closed at a gap of less than half an inch between the door and the door jam as she reached her hand in the door," said Paul Rose, spokesman for the San Francisco Municipal Transportation Agency, in an interview with San Francisco ABC station KGO.

SFMTA, which operates the train line, has recently purchased new Muni wagons, including the wreckage.

"These trains and doors are safe," said Rose. "They work as planned, they have been certified by CPUC [California Public Utilities Commission] and have gone through six months of testing before we put them into service."

The CPUC has announced to investigate the doors and the pen system to KGO.

"I heard screams behind me and did not know what was going on, but there was a commotion and I was really scared," eyewitness Will Hayworth told KGO. "She tried to keep up with this move, and this new Muni car pulled her by the hand … People shouted," Stop! "and some people even pounded on the car and shouted," Stop, stop, there's someone in the trap. "

"She stopped, but was still dragged," he continued. "The car has not slowed down at all, basically it seemed like the operator had no idea what was going on."

Matt Haney, San Francisco District 6 supervisor, which includes the Embarcadero region, said that this was not the first time that he had heard complaints about door problems, including SFMTA employees.

"Obviously there must be different sensors on the doors or it's a possibility that drivers can see things differently," Haney said. "In my understanding, some of the operators actually pointed out that this was a problem and they were worried about it."