قالب وردپرس درنا توس
Breaking News
Home / World / The Yazidi girls who did not want to be rescued from ISIS: NPR

The Yazidi girls who did not want to be rescued from ISIS: NPR 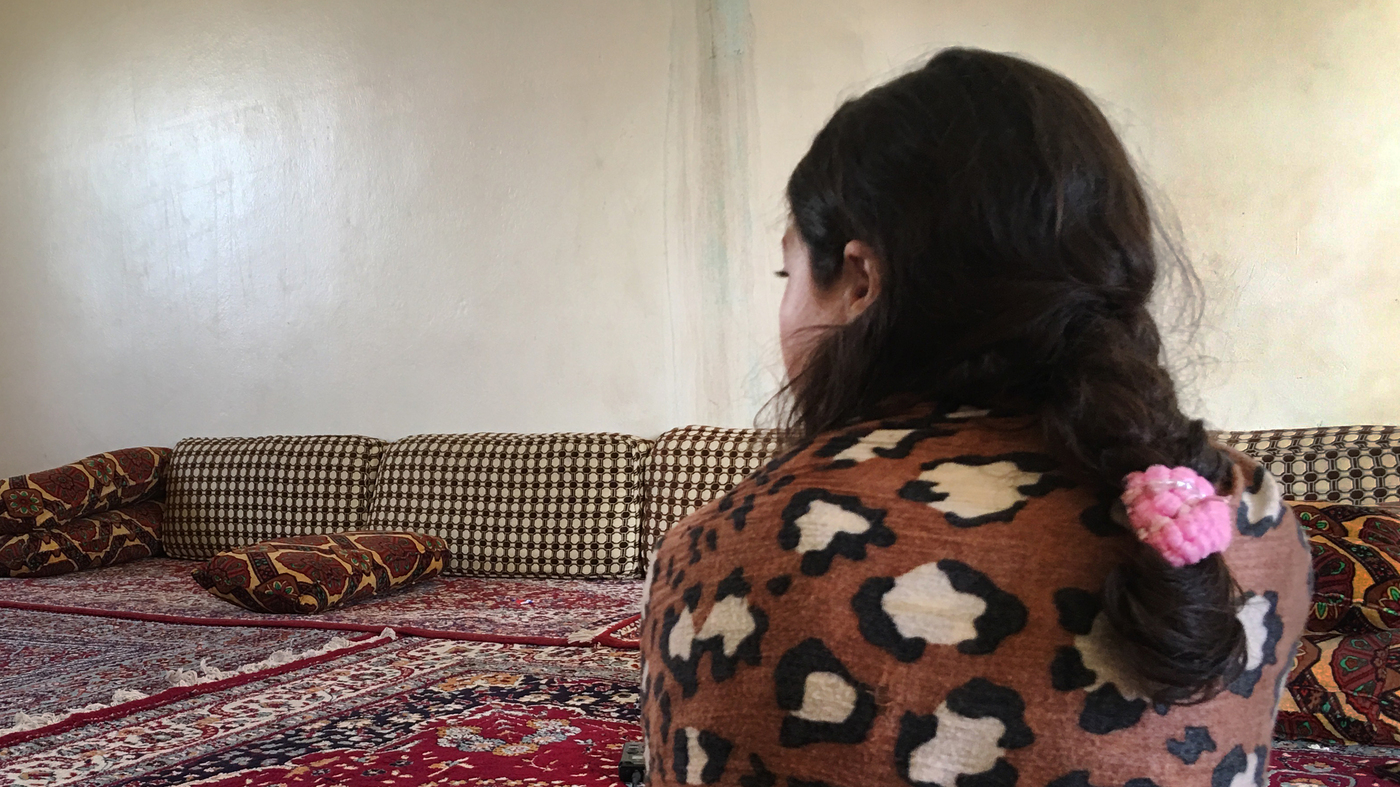 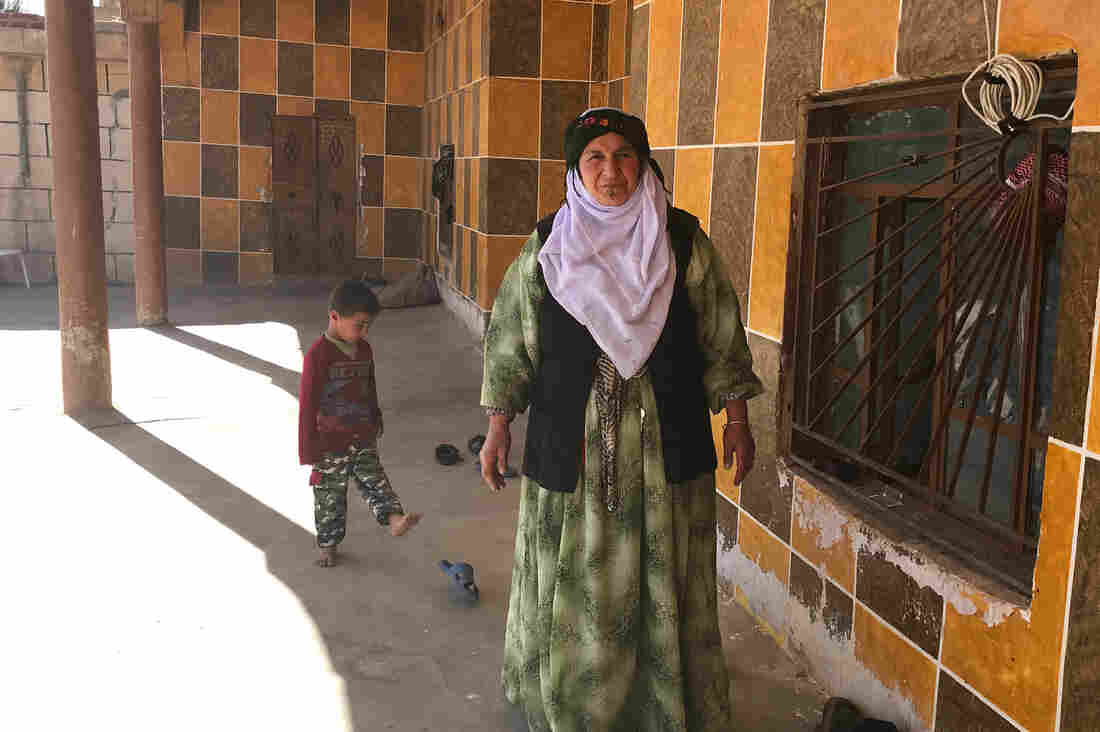 Zahura Sinan with a grandchild. She and her son's family looked after nearly 150 Yazidi women and children rescued from ISIS.

Zahura Sinan with a grandchild. She and her son's family took care of almost 150 Yazidi women and children rescued from the IS.

Zahura Sinan passes wrapped sweets to guests sitting on rugs in the family living room in a village in northeastern Syria. It is the first day of freedom for two ISIS-released, Moroccan girls who have been imprisoned for two years.

"This is like her birthday," says Sinan's son, Mahmoud Rasho, the jazi official who found the girls in a detention center for ISIS families. His family is currently looking after her at her home near the city of Hasaka.

The rescue of two Yazidi girls who have survived a genocide that killed more than 1,000 people and an estimated 5,000 more from this ancient religious minority hostage would normally be a joyous opportunity.

But these girls did not want to be saved.

Jeelan, 11, sits with her head bowed and arms around her knees, a patterned brown and white scarf that wrapped her hair around her thin shoulders like a scarf.

"I want to go back to Um Ali," she whispers, referring to the Iraqi woman who pretended in the camp that the girls were her daughters. "To Ali is my true family." 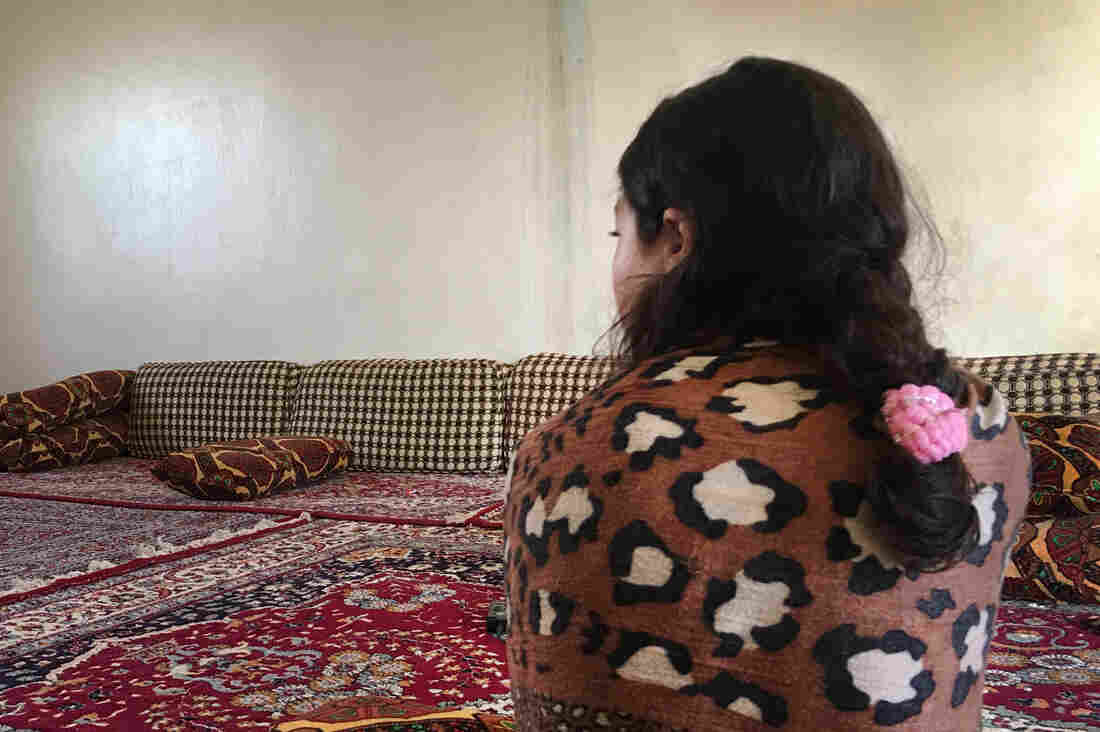 Jeelan, 11, the day after her rescue from an ISIS family she had detained for the last two years. She says she does not remember her Yazidi family. "I want to go back to Um Ali," she says, referring to the Iraqi woman who pretended to be her mother in a detention center for ISIS families. "To Ali is my true family." 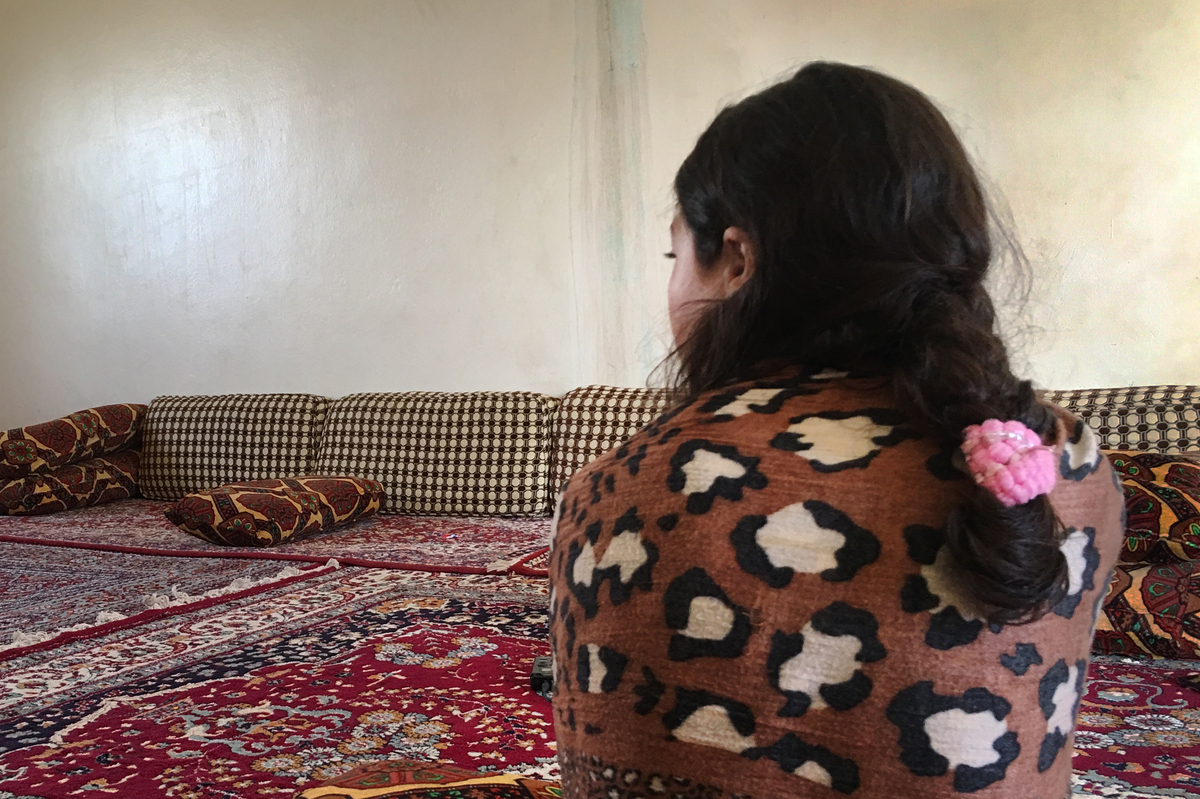 Jeelan, 11, the day after her rescue from an ISIS family she had detained for the last two years. She says she does not remember her Yazidi family. "I want to go back to Um Ali," she says, referring to the Iraqi woman who pretended to be her mother in a detention center for ISIS families. "To Ali is my true family."

Her 10-year-old friend Watfa sits in the heat across the room, wearing sweatpants and a long-sleeved T-shirt, looking sadly at the floor.

"I want nothing else but to return to Um Ali," she says.

To protect their privacy, NPR does not use girls' last names. To Ali is the only name the girls know for the woman they consider to be their surrogate mother.

The girls speak Arabic, learned from their ISIS kidnappers. They have forgotten the Kurdish dialect of the Yazidis. And in those early days, still mourning the only mother they've known in two years, they say they do not want to return to families they barely remember.

Rasho found her in the sprawling Al-Hol camp through information from another Yazidi girl he had rescued there a week earlier. The overcrowded camp accommodates more than 80,000 Syrians, Iraqis and other foreigners – most of them families of ISIS fighters. 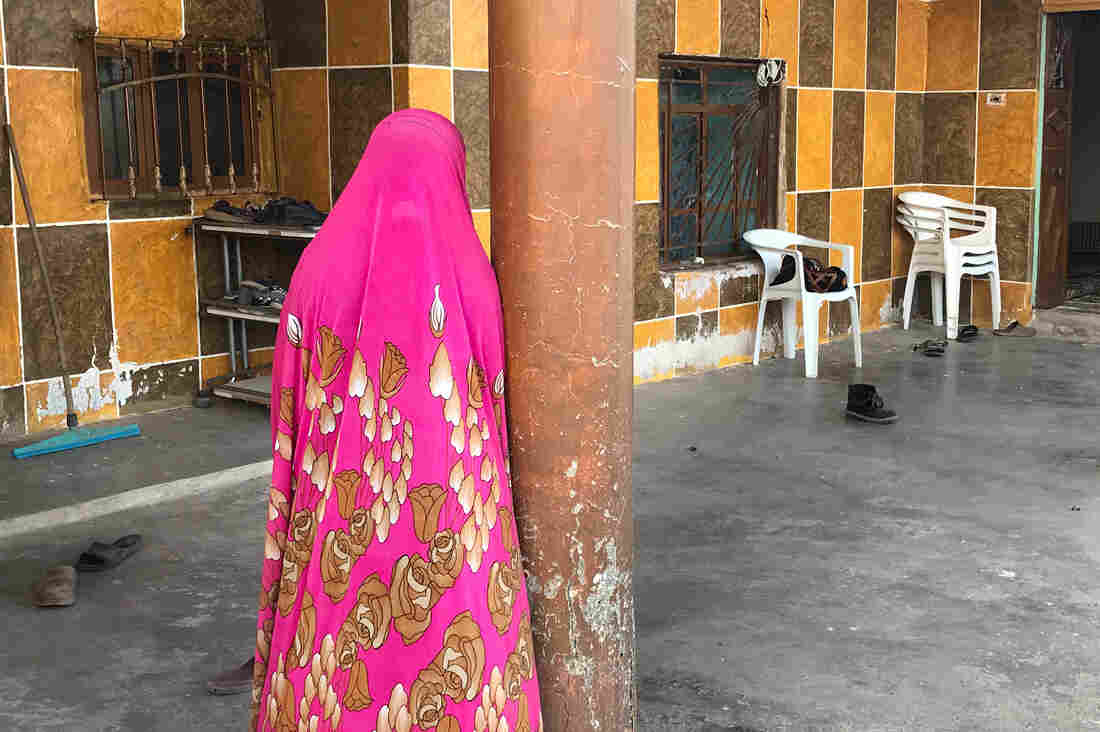 Watfa, 10, the day after her release from the ISIS family. Watfa has been raised as a Muslim for the past two years and says she does not remember being Yazidi. 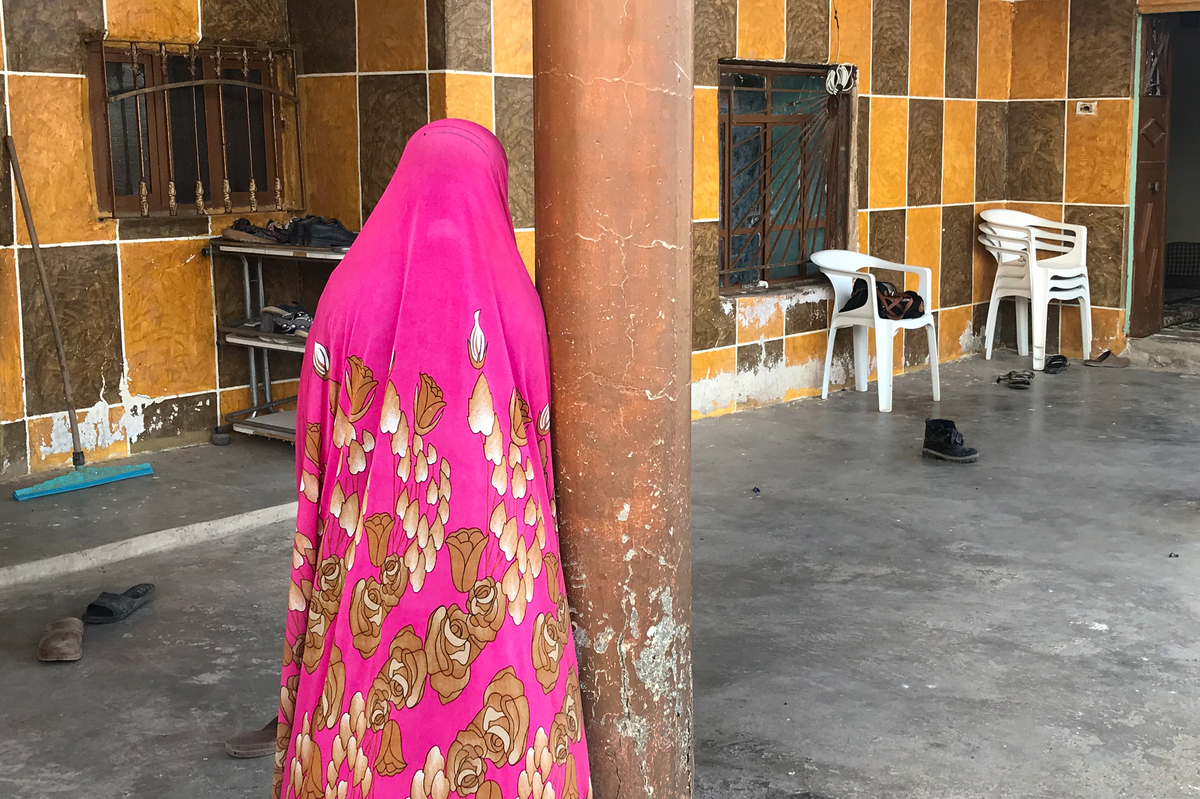 Watfa, 10, the day after her release from the ISIS family that detained her. Watfa has been raised as a Muslim for the past two years and says she does not remember being Yazidi.

Rasho believes that there could be hundreds of Yazidi who still live in ISIS families. These include those who are afraid to declare themselves as Yazidi, women born after being raped by ISIS fighters who do not want to give up their children – and some who were so young when they were captured have forgotten , who they are.

Rasho, who holds an elected position in the Kurdish-led regional government in northeastern Syria, had returned to al-Hol the night before midnight with a female camp guard under the guise of documentary examination. Members of the group he was with blocked the entrance and exit of the large tent where Um Ali and the girls lived with dozens of other families.

"There was a woman who said: 'These are my girls'," Rasho says, referring to Ali. "I said, 'Come with your girls.' We went to the camp administration."

Watfa and Jeelan were 5 and 6 years old when they were kidnapped. Neither can remember his last name.

Rasho sent his photos to contacts in the Sinjar region of Iraq, where their families are from, and within 10 minutes the children had been identified.

The girls had the office for a few minutes to say good-bye to a whiny Um Ali before Rasho took them sobbing.

Jeelan and Watfa had been abducted with relatives but were separated from them. They were housed in a guest house for ISIS fighters when Um Ali, a widow, took her in two years ago.

"She sold girls, and she married them when they were two or three years older than they are girls," Rasho says.

But Jeelan and Watfa saw her only as a maternal protector. They do not remember being kidnapped by ISIS. Jeelan says Um Ali took them in when they did not have anyone to take care of them.

"She raised me, she told me:" That's okay – that's not okay, that's good, that's not good. "She says in tears. To Ali has taught her reading and writing.

Rasho asks Jeelan if she remembers Sinjar in Iraq and if she wants to see her family – her father, her brother and sister are waiting for her there. 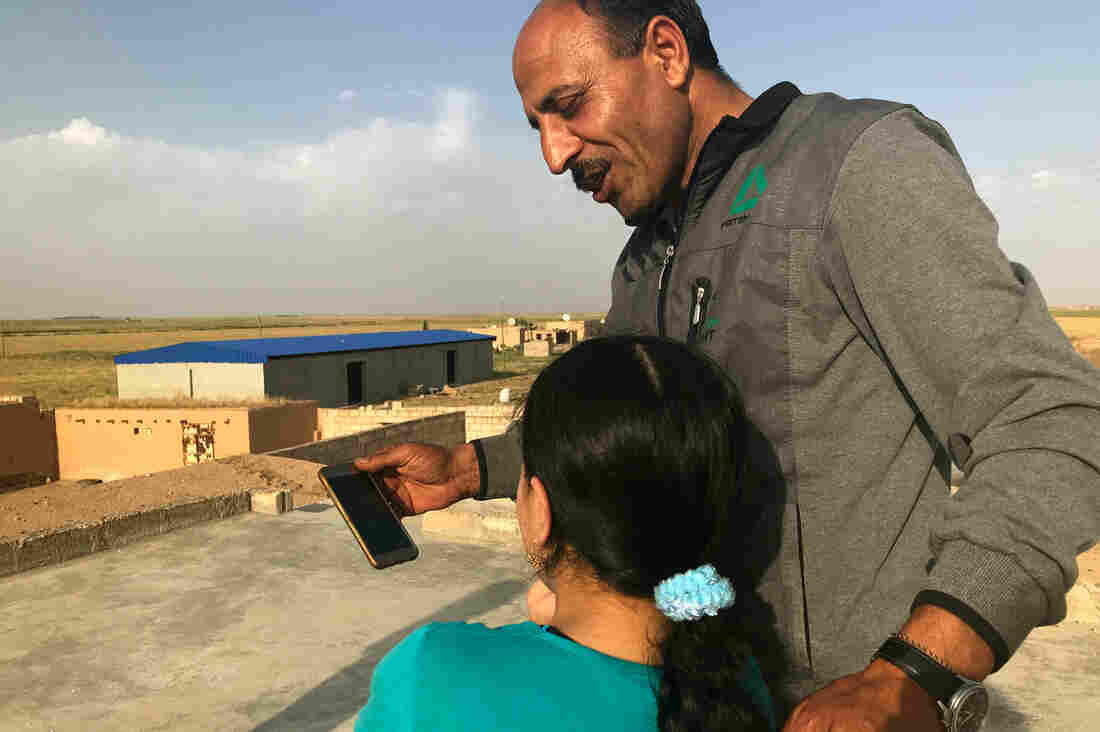 On the roof of his home, Mahmoud Rasho makes a video call for Watfa, 10, so she can talk to her relatives in Canada. Her mother, also held by ISIS, was taken as a refugee in Canada. 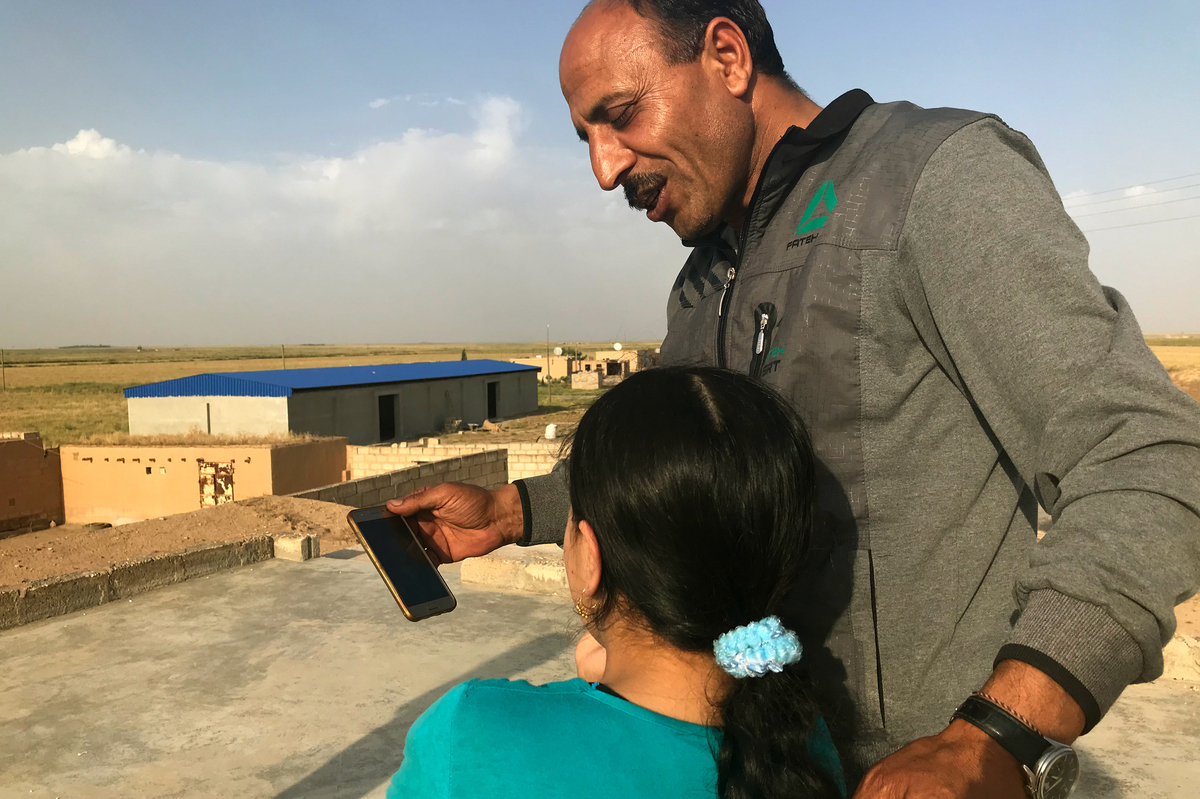 On the roof of his house, Mahmoud Rasho makes a video call for Watfa (10) so she can talk to her relatives in Canada. Her mother, who was also detained by the IS, was taken as a refugee in Canada.

Yazidi girls and young women do not cover their hair, but Jeelan says she likes to wear the niqab – a black cloak covering everything but the face – because "God says we have to wear it."

She and Watfa have never watched TV. They watched a broadcast on the life of the prophets on a cell phone.

The two girls say they do not remember anything about being Yazidi. They speak of following the Koran and seem to regard themselves as practicing Muslims.

They landed in the camp earlier this year, after the terror and plight of the last days of the ISIS caliphate – air strikes, mortars and famine. The US-backed Kurdish forces fought against the group that once controlled tens of square miles in Iraq and Syria.

Nevertheless, Jeelan says life with her ISIS family is easier than it is today. "Normal," she says. She does not understand these unknown people, Yazidis, who claim they are their people.

Rasho and his family have opened their homes to nearly 150 Yazidi women and children rescued from ISIS – some were injured; all traumatized. He and his wife and mother take care of them until the liberated women and children are allowed by the Kurdish authorities to cross the border into Iraq.

"Do not cry, Jeelan. Do not cry ", Rasho's teenage daughter Haya, dressed in jeans and a pink T-shirt, tells the rescued girl. She tells the girls that they will get them new clothes. Jeelan cries even more.

Rasho says that when some rescued children return to their families in Sinjar, they insist on wearing the niqab and speaking Muslim prayers five times a day. He says this phase is over.

A Yazidi boy, rescued a few days earlier by Rasho from al-Hol camp, is stretched out on a foam mat in front of a TV and enchanted by animated films. He was 7 years old when he was enslaved by an Iraqi ISIS fighter who used him as a shepherd and beat him regularly.

Now Haval has a ready smile and broken front teeth. Despite the horror he has gone through, he seems to adapt. He no longer speaks Kurdish, but says that when he was alone, he remembered that he was Yazidi and thought of the village from which he came.

"Sometimes I talked to myself about Sinjar, but I made sure they did not hear me," he says. 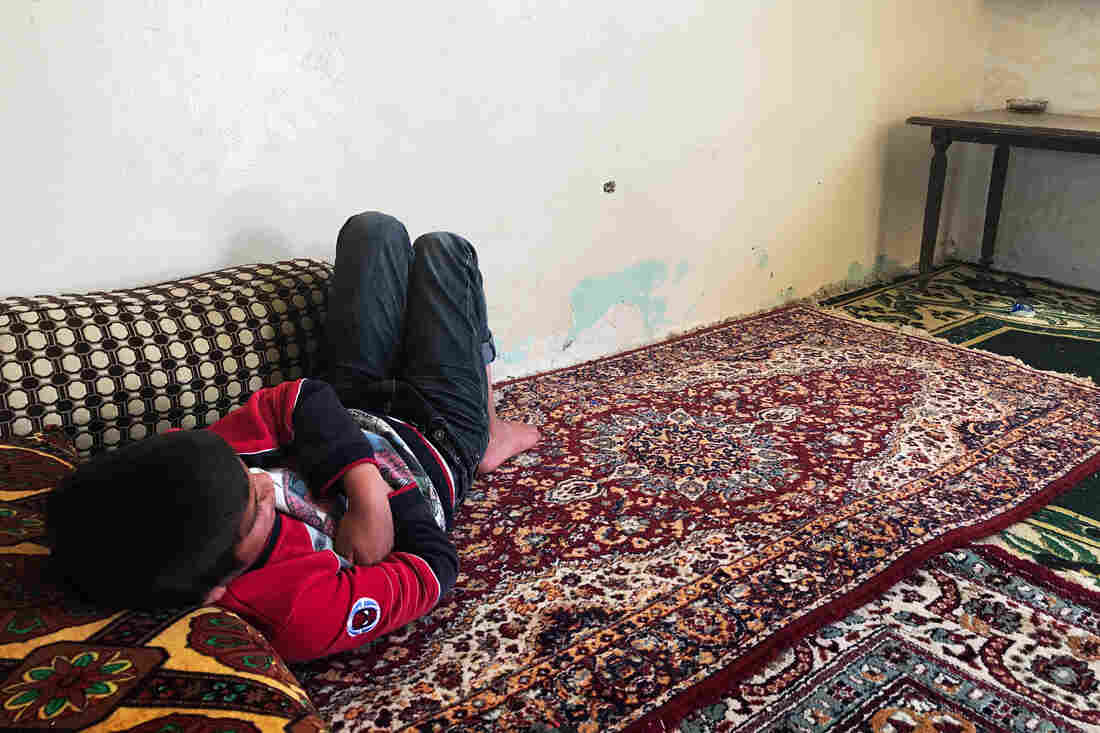 Haval, 12, watches TV. The young Yazidi was rescued from al-Hol camp and is waiting to be reunited with an older sister in the Sinjar region of Iraq. 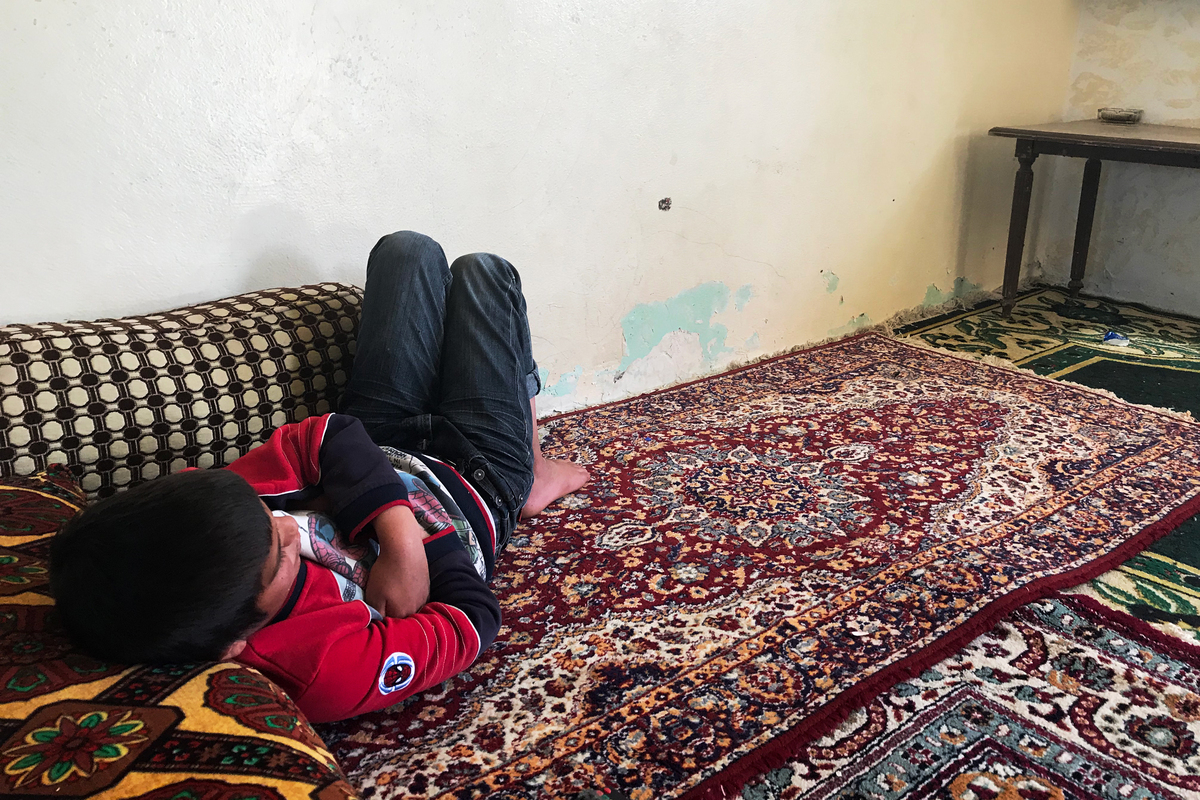 Haval, 12, watches TV. The young Yazidi was rescued from the camp al-Hol and is waiting to be reunited with an older sister in the Iraqi region of Sinjar.

His few Yazidi friends have either disappeared or been killed in air raids. After that, he had no one to talk to about Sinjar. When he was not out in the fields looking after sheep and goats, he would sometimes sit in his room crying secretly, thinking of his family.

Haval says that the ISIS family he was with constantly tried to teach him the Koran.

Haval comes from a village near Kocho, the site of the worst massacre of the ISIS genocide against the Yazidis in the Sinjar region of Iraq. Hundreds of men and older boys were rounded up and shot there in 2014. Haval's family was captured by ISIS when their car broke down when they tried to flee to Mount Sinjar.

Haval has no news about his father and mother and a brother who is still missing.

He saw one of his sisters – several years his senior – who was bought and sold by a number of ISIS fighters only once in Baghouz, the Syrian village where ISIS resisted for the last time.

"They brought her to me and we sat for a while," he says. "And then they took her."

They wondered if they heard news about the rest of the family. You had not. The ISIS fighter, who owned his sister, drove her away with a motorcycle. Haval says he ran after them crying until he fell on the street.

But now she is free and Haval wants to see her. She is waiting for him in Sinjar. In a video call with another sister, who is now in the Netherlands, he again asks if there is any news from her parents. There is none.

Rasho leads Watfa outside and up the stairs to a windy roof where the reception for a video call with her mother and other relatives now living in Canada is better.

can Kurdish? "One of the relatives keeps asking." You have to speak Kurdish, not Arabic. "

Haya tells Watfa that they can watch cartoons together – or a Bollywood movie The girls have never seen one.

Instead, Watfa wears a pink outfit completely covering his hair and body to recite Islamic prayers, Jeelan retrieves the black niqab she had rescued the night before, clutching it fearfully and then putting it on with a quiet smile

Now it's hard, says Rasho, but after a month at home, he's confident that the girls will remember who they were before the IS.