Thousands in Venezuela participate in protests against Maduro 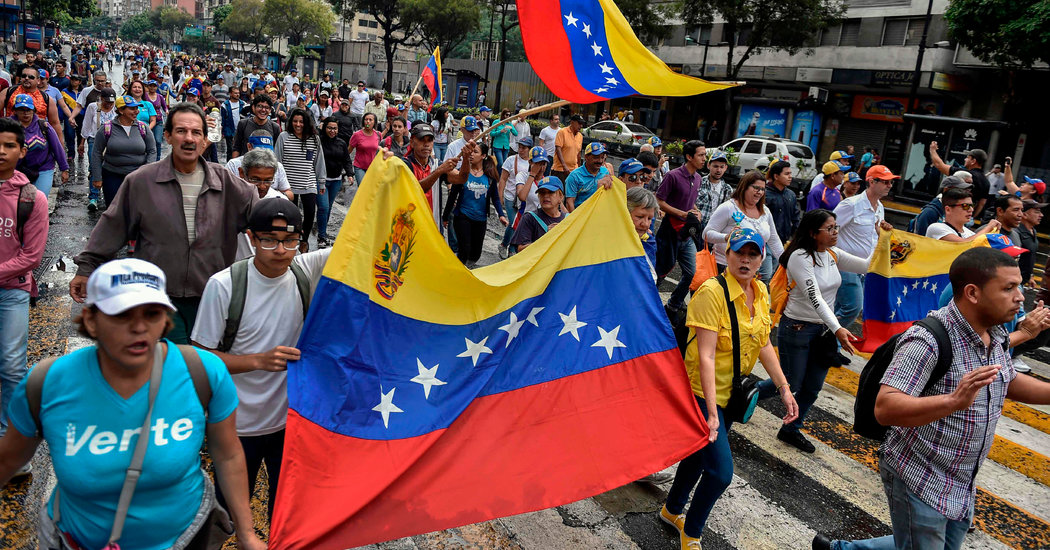 CARACAS, Venezuela – Thousands of Venezuelans, many draped under the flag of their country, took to the streets on Wednesday to answer the opposition's call for a nationwide protest to force President Nicolás Maduro out of office.

"Freedom, freedom!" A group sang in Caracas, the capital.

"Today I'm not afraid," said Marta López, a 46-year-old executive director, adding that the country's economic crisis has become unbearable. "Today we must all save ourselves to save our homeland."

The demonstration is part of a renewed thrust by the Venezuelan opposition, which remained largely powerless and was defeated by security forces following an outbreak of anti-government activism in 2017. The opposition hopes that a significant turnout on Wednesday will help persuade the nation's military to break with the president.

Numerous demonstrations against the government broke out overnight. Opposition leaders say that the efforts to oust Mr Maduro, who was sworn in for a second term on 10 January, are now better off because his government is collapsing under the weight of an economic crisis and more isolated than ever.

The United States and many Venezuelan neighbors have called the president an illegitimate dictator and strongly signaled support for a plan to create a transitional government.

"What we are experiencing is a unique historical moment we have been preparing for. I have fought for it for the past 20 years," said opposition leader María Corina Machado on Tuesday. "Obviously, this is the moment of greatest danger for all Venezuelans and the moment of greatest responsibility for those of us who know what it's about."

Mr. Maduro and his allies demanded rival demonstrations on Wednesday, accusing opposition leaders he calls "terrorists" of selling Venezuela to the United States.

"The imperialists and the oligarchs want to govern Venezuela directly." Mr. Maduro told the supporters on Tuesday evening, "Will we give up Venezuela's sovereignty?"

Maduro will probably find it more difficult to resist this challenge of his legitimacy than he has done it in the past, opposition leaders and analysts say.

On Wednesday Ivanka Trump joined forces with other members of the Trump government to join a support message for Venezuela's opposition: " @ POTUS @ VP and the entire government are among the people of Venezuela as they seek freedom from the suppression of dictator Maduro, "she explained. wrote on Twitter .

Vice President Mike Pence posted on Tuesday a video message to the Venezuelans sprayed with Spanish words urging them on Mittwoc "We will stay with you until democracy is restored and you get back your birthright from Libertad."

In Venezuela's socio-economic class, discontent has worsened as hyperinflation has made wages worthless , Citizens of the once wealthiest nation in the region have starved to death and have died from preventable diseases.

More than three million Venezuelans have left the country in recent years, and the remnants have fought for food and medicines during their time

Eva Golinger, an American lawyer, was a close friend of the left Strongman Hugo Chávez, mentor and predecessor to Mr Maduro, said the government could no longer count on its traditional bastions of support for overpowering the opposition movements formerly led by wealthy and bourgeois Venezuelans.

"The difference is that dissatisfaction is not just opposition," said Ms. Golinger, who wrote a memoir called "Confidante of & tyrants" about her relations with Venezuelans and other leaders. "In fact, it is the poor, in particular, who are fed up with giving up basic products and earning decent wages."

One of the notable differences is the youth of the politicians, who now want to topple the search for Mr. Maduro and the careful news 19659019] The new opposition leader Juan Guaidó, Juan Guaidó, is a 35-year-old industrial engineer, who was little known at home or abroad until this month. At that time he was sworn in as President of the United Nations National Assembly. His appointment enlivened the opposition-dominated legislative body, which had become ineffective and unpopular in recent years.

"People lost faith," said Maria Amelia da Silva, 54, at an outdoor meeting in the City Hall style. Over the past few days, opposition legislators have gathered to push their plan forward. "Then a leader appeared, and this new leader became our greatest hope."

Mr. Guaidó says he is ready to lead an interim government that distributes humanitarian aid, take steps to turn the economy and convene free and fair elections. He argued that this would not violate the Constitution because Mr. Maduro, whose re-election was punished last year as manipulated, "usurped" the presidency.

The protests of the past were rage and outrage, but Mr. Guaidó and his allies tried to strike a hopeful, conciliatory tone. They have made great efforts to urge members of the military to turn their backs on Mr Maduro, arguing that this would not be a coup d'état, but the adherence to their oath to uphold the Constitution.

On Monday evening, Mr. Guaidó and his wife Fabiana Rosales recorded video messages that appealed to the conscience and aspirations of military personnel.

"None of you can dignify your military paycheck, you can & # 39; They meet the basic needs of their children and relatives, "said Guaidó. "In the midst of this debacle, those responsible for this crisis have forced them to oppress and suppress demonstrations by people who only want to eat, have access to medical care, water at home, and electricity." [19659002] Town hall meetings known as cabildos have attracted thousands of people in recent days. Speakers have fueled the crowd by talking about freedom of the press, economic policies and gloomy Christmas time in Venezuela as more and more people move abroad.

A 63-year-old retiree in Caracas who wore a rosary of yellow, blue and red beads and paid tribute to the Venezuelan flag. As for the youthful speakers, she added, "These are not superheroes that turned up overnight. For the first time, however, we see a solution in sight. "

Some oppositionists have reservations about the current approach. Juan Andrés Mejía, a legislator, said it was dangerous to stop the military – the linchpin of their plan.

"We live in a dictatorship," he said. "Every contact we make should be considered the worst of all crimes."

But the Venezuelans said they were aware of the dangers of resisting a government that killed protesters and labeled people who are suspected of being killed and tortured. We are forced to be optimistic because the risk we face is facing us, "said Luz Mely Reyes, who runs the independent news site Efecto Cocuyo . "The Democrats of ours know that if we fail with deep regret this time, we will have to bury little of democracy in Venezuela."