Thousands of years ago, a warm Arctic made the middle latitudes drier 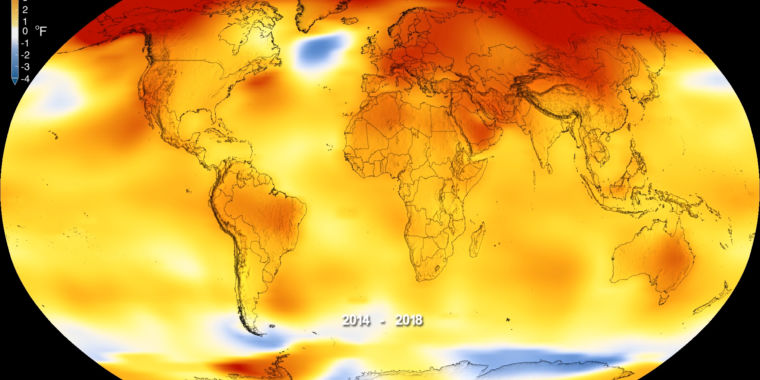 The thing about global climate change is that it's not so easy to shift temperatures anywhere around a set number of degrees. The temperature change is not uniform around the globe, and these regional differences can have a significant impact on the weather.

For example, the Arctic warms more than the equatorial region. For our current global warming project, this will affect the Arctic itself. A succinct hypothesis is that the increased warming of the Arctic affects the behavior of the polar beam, resulting in extreme weather changes in mid-latitudes. This idea is the subject of ongoing research as well as genuine scientific debate and uncertainty.

Lessons from the Past

Patterns of this kind can be examined by looking at past climatic changes. This was done by a team led by Cody Routson of Northern Arizona University, which compiled palaeoclimatic records of precipitation in the northern hemisphere over the past 1

This covers most of the time known as the Holocene – the warmer "interglacial" that followed the end of the last ice age. The clockwork of the Ice Age was determined by cyclical orbital motion in Earth's orbit that slightly changed the intensity of summer sunlight north of the northern latitude, where most of the large ice sheets were located. The solar cycle of the summer peaked about 10,000 years ago, and temperatures in the Arctic began to decline slowly thereafter.

This means that the trend from about 7,000 years to the Industrial Revolution was the opposite (if you will) of ours was current human-induced warming trend: As the sensitive Arctic cooled faster than the Equator, the temperature difference between the Equator. The question the researchers answered was how this temperature difference from pole to equator affected precipitation at mid-latitudes.

In response, they compiled as many published temperature and precipitation records as possible over 10,000 years, based on everything from tree rings to insects found in the mud of the lake. These records have been subdivided at latitudes from the equator to the Arctic. Based on the temperature data, the researchers were also able to calculate the temperature difference between pole and equator over time.

In the mid-latitudes (between 30 ° and 50 ° north of the equator) the early part of this period was actually much drier than today, with precipitation increasing in the following millennia.

Examining how th As two things were related, the team turned to climate model simulations of the last 10,000 years. The simulated temperature difference between pole and equator coincided fairly well with paleoclimate data, and the same pattern of increasing precipitation was also evident, although the increase in models appeared to be lower.

The increase in mean-latitude precipitation proved to be driven by atmospheric circulation changes. In the drier early period, the weaker pole-to-equator temperature differential caused a weaker jet stream and westerly winds and weaker versions of the Spinning Storm systems, which typically make up the largest rainstorms in the mid-latitudes. Until the last centuries all these things intensified, which led to more precipitation.

Projecting the future is not as easy as reversing these simulations with rapid warming. Arctic weakens the wind and reduces precipitation in mid-latitudes. The climate patterns of the Holocene have been determined by the impact of cycles of circulation on sunlight, whereas humans are warming the Earth's climate differently. And while the researchers here considered the average average important regional differences could occur, which are hard to detect in local paleoclimate records in a limited number of places. However, the physical process they identify can be studied more closely to understand how it will behave in the future.

"Currently," the researchers write, "the northern high latitudes grow at almost twice the global mean, reducing the temperature gradient between equator and pole to levels comparable to those in the early to mid-Holocene. If the patterns observed during the Holocene apply to anthropogenically forced warming, the weaker temperature gradient in the width direction will result in significant reductions in mid-latitude water resources.