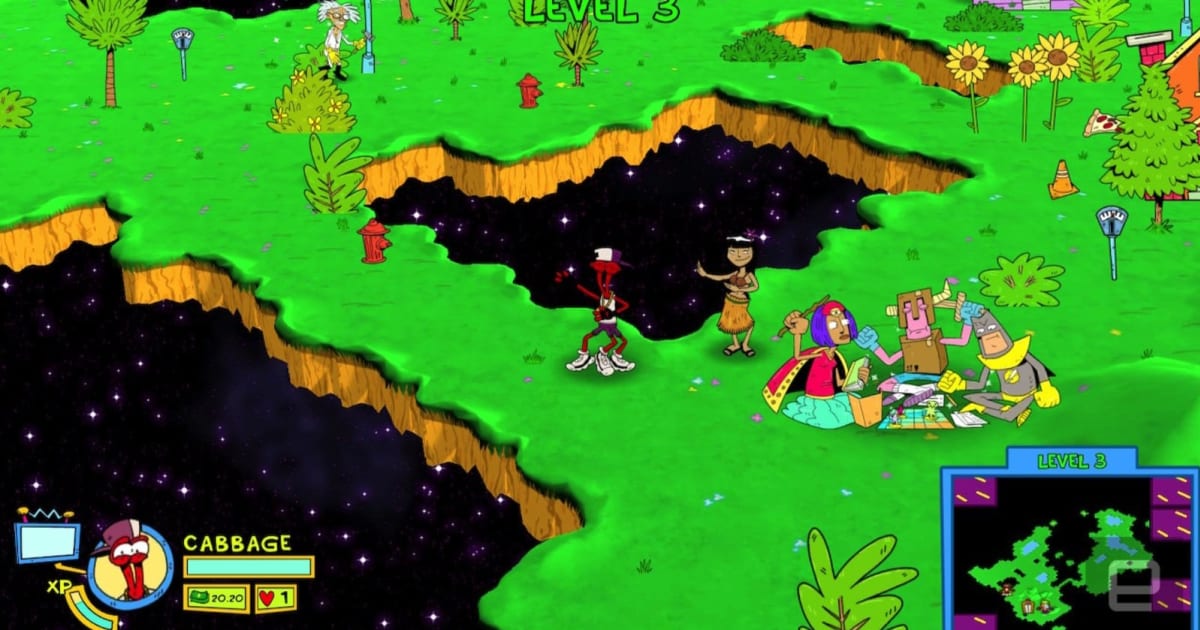 Before playing Back in the Groove I actively avoided any kind of research. I had read about the general thrust of the reboot a few years ago, and I did not want to expect the original. I'm glad I did that because when I first started it up with my switch, the punch of nostalgia was like a double dose of happy pills. The outrageous colors and the exaggerated funk soundtrack of the menu screen immediately brought me back to the early '90s. I felt like I was kneeling in front of a small CRT again.

"This game … bizarre " commented a friend. And he's right, it's plain stupid . In the opening sequence, our protagonists, would-be alien rap duo ToeJam and Earl, bring their Boombox Cum Spaceship to Earth. Their plan to impress a few female aliens, however, goes awry when Earl pushes the wrong button and creates a black hole that rips the vehicle. To rebuild it, you need to go through the game layers and restore parts, avoiding annoying earthlings and dealing with helpful ones. And that's literally – you get into an elevator through an elevator and can fall back to a previous level when you fall off the edge.

It was exactly as I had imagined. and I was thrilled to explore the early levels, with funky, bass-guitar rhythms humming in the background. I smiled when I met Gandhi for the first time, who will protect you from the enemies of the game if you stay close to him. Ah yes, the Hula girls! I thought when ToeJam met one and I could not help but dance. I plunged into the line-running and rhythm minigames, slipped into Santa Claus, and was flattened by an overweight Segway Riding Mall policeman. I was not sure if I was friend or foe first. I searched for hidden trails that showed up nearby, I took every gift (the version of the game of power-ups) and shook every bush in hopes of finding money. And within half an hour, I was bored with my thoughts.

real fast. The difficulty of the game is simply putting more crap on the screen as you progress through the levels. Do not get me wrong when you meet the cop of the Segway Mall, the drone pilot, the alien fanatic, the evil elevator, or the MIB agent who introduces a bit of character into the game for the first time. But if you are on the last level and you can barely see your enemies – and at this point you just have to reach the last elevator and turn that thing off – nothing is interesting. Many enemies will knock you in contact, sometimes from the level and to the previous level. You have to go to the elevator, wait for the loading screen and try again. I can not imagine a more frustrating mechanic.