Tour de France 2018: The race continues after the protesters stopped the peloton on the 16th stage – live! | Sports 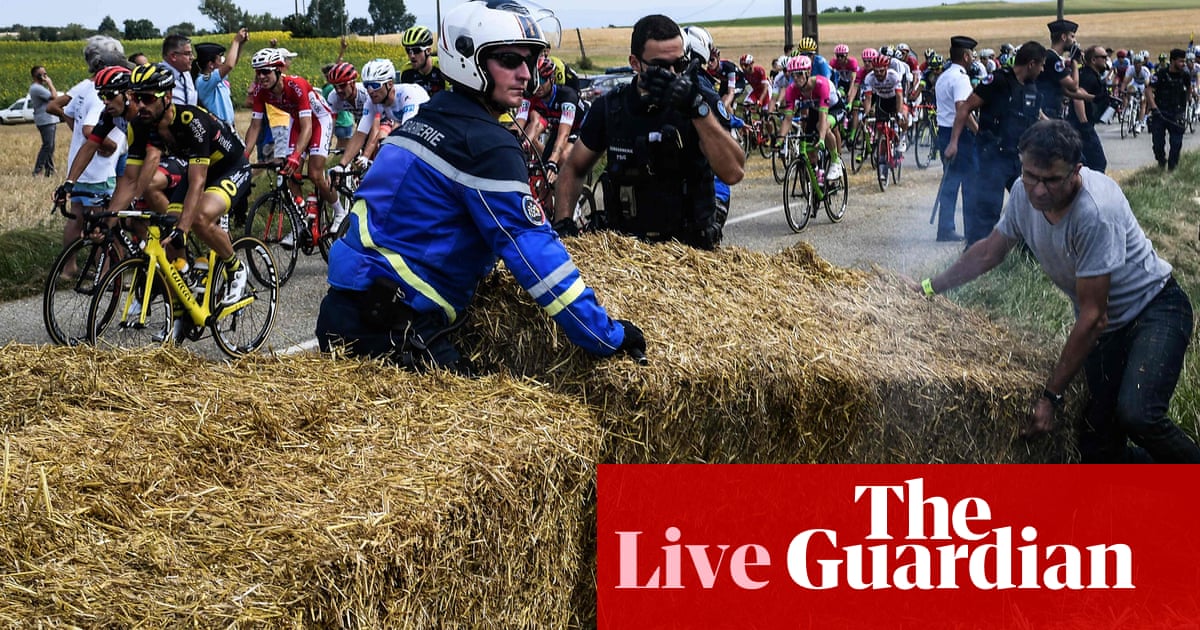 162 kilometers from the finish line: More attacks from the front, with Warren Barguil and Daryl Impey, Julien Bernard and Julian Alaphilippe opening a small gap , Barguil looks at the polka-dot jersey that currently adorns the shoulders of Alaphilippe. There is some quality in this breakaway group if they can stay away. The gap is 18 seconds at the moment, but understandably the peloton seems reluctant to let her go.

170km before the finish: The group is back after the four-man breakaway group could not break the rubber band. In the meantime, the sky is open, and the sky is hammering with rain. It's just a bit of tension after another today.

174km to go: Our four-man runaway are now 21 seconds behind the group Chavanel overtook. There will be a lot of team bosses unhappy that they have no men in this breakaway group, that will be good to stay clear. The field behind them is very excited.

178km to go: Stefan Kung (BMC), Rafal Majka (Bora Hansgrohe), Franco Pellizotti (Bahrain-Merida) and Andrea Pasqualon ( Wanty Groupe-Grober) have a 17 second advantage on the field where Sylvain Chavanel has jumped from the front and tries to bridge the gap.

183km to go: The flag drops again and the race begins again. None of the drivers seem to have any adverse effects when a policeman's pepper spray blows back into her face.

This from the internet: "Pepper spray causes non-fatal inflammation of all mucous membranes in the eyes, nose, mouth and lungs, causing the eyes to close before intense burning and temporary blindness, lasting between 30 minutes and two hours. Antidote for pepper spray are milk and dawn. "

187km from the finish line: The riders begin another rollout and are still controlled at a quiet pace a few miles behind the car of the race director. The drivers nor did not learn on the radio that they were "attacked" by an overzealous police officer who did not influence the breeze – and where it would atomize his pepper spray – in a manner He decided to to deliver with an angry farmer. Undoubtedly, they console themselves with the fact that even the stupid Gendarm has injected the stinging stuff in the face.

187km to go: ITV4's team of commentators Ned Boulting and David Millar have revealed that it was indeed a French policeman who accidentally killed several Bicyclist sprayed pepper spray while he tried to hold back a demonstrator who was trying to throw hay bales into the path of the peloton. The confusion continues, though the drivers have no idea what the hell is going on.

187 kilometers from the finish line: The race stops and Race Radio still has to explain exactly what is going on , A Dutch television station that has a motorcycle after the race reports that someone – apparently a policeman – sprayed pepper spray in front of a demonstrator and managed to hit half the field while he was there.

187km from the finish line: The race has been stopped and now stories emerge that some of the drivers might have attacked with pepper spray. The peloton is currently behind the cars of the race organizers, some drivers are still washing their eyes with the contents of their bidons, others are heading back to their team cars for medical treatment. Those who seem unimpressed by what's happening, return to their cars to eat food and pause for convenience on the side of the road.

187km to go: Christian Prudhomme neutralizes the race as there is some kind of protest on the side of the road. On either side of the road are riders who wash their eyes with water after the hay bales are thrown into the street by the peasants. On television there is a suggestion among the commentators that fertilizer may have been sprayed on the field in passing. More news, how we get it.

193 kilometers from the finish line: The peloton is in the first climb of the day, the Cat 4 Cote de Fanjeaux and Warren Barguil of Fortuneo-Samsic is the first to reach the point for the King of the Mountains rating. Behind him, Tim De Clercq remains in all sorts of trouble as he struggles to stay in touch with the back of the group.

197km to go: Direct Energie launches another attack from the front, as does Katusha-Alpecin, who has only four riders left. Nils Politt is her man with the teeth between the teeth, but is quickly caught up. Katusha rider Marcel Kittel, who left this year's tour after missing out on La Stage 11, was forced to come out and say that A team will not be in turmoil after just one year. Kittel was criticized by his new directeur Sportif Dimitri Konyshev, who called him selfish and "selfish".

"Just because someone has an opinion of mine that I do not like does not mean that the world is coming to an end," said Kittel in an interview with Sport1.de. "Ok, the way it's communicated is different, people can have different opinions, but everything should be done within the team, and in the end, it's an individual opinion, I will not hold it against the whole team After that, I had good conversations with the other guys in the team, that's important to me, and I think we put things right between us. "Time trial specialist Tony Martin is also dissatisfied with his life in the Katusha-Alpecin team be.

199km from the finish line: Save a thought on Tim De Clercq, the Quick Step driver who is already struggling the back of the peloton. Whatever is with us, it will surely be a long day for him.

201 kilometers from the finish line: The troupe continues to roll and occasionally there are futile attacks from the front. It's going to be a long, old day, so if you want to get in touch with your thoughts on today's stage, the tour in general, or anything else you like, you can do just that.

204km to go: The bunch reacts to the three-man attack and pulls them in.

205 km from the finish line: A group of three drivers has opened a gap of a few seconds to the field, from where several other drivers skipped become. Lotto Soudals Thomas De Gendt, Jerome Cousin of Direct Energy and Guillaume Van Keirsbulck of Wanty Groupe-Gobert are the men of the escape party.

211km from the finish line: Five kilometers beyond, the drivers at the top of the field closely monitor each other, as did early attacks to be started. No one has started a successful runaway so far.

Christian Prudhomme waving the flag: The race begins on the 18th stage. Riders from Lotto Soudal, Mitchelton Scott and Direct Energie start early. Mitchelton-Scott driver Damien Howson was confirmed today as a belated non-starter after succumbing to a broken bone in his right hand. The field is now at 148 and only six teams have their full complement of eight riders.

The rollout has begun: There are six more stages in this year's Tour (good, five plus Sunday) procession in Paris) and before they received the signal for the race, the drivers started this morning with the procession from the beautiful fortified city of Carcassonne, to which movie fans should remember the setting for the 1991 Kevin Costner vehicle Robin Hood: Prince of Thieves. Of the 176 participants who started, 149 riders remained and seven complete eight left over.

Nico Portal speaks: In an interview on Eurosport, Sky directeur sportif was asked how the absence of Gianni Moscon would affect would be the team for the rest of the week. "A lot, as we said," he said. "We are entering the third week of the tour and many of them are short, we have this place every day off and the boys will work harder to cover their workload."

Team Sky Chief David Brailsford yesterday was in exuberant and self-confident manner and condemned the organizers of the tour for not doing any more, to protect his riders and backroom staff from the roadside abuse of spectators, which of course should not be tolerated.

"It's interesting that we just did the Tour of Italy and Chris Fall was open and the Italians were fantastic, and the Spaniards did the same," said Brailsford, who apparently did not notice the maltreatment of Froome during the Giro "It just seems to be a French cultural thing."

Brailsford's comments came less than 24 hours after a driver of his own team, Gianni Moscon, had been taken out of the race because he apparently had a blow to one The driver was swinging from another team, Moscon was previously suspended for having racially abused a rider in the peloton, never change, Dave.

Geraint Thomas continues to lead the tour while his teammate takes on the defense champion Chris Froome , Trails in second place from 1min 39sec. When asked yesterday if he would be willing to sacrifice his ambitions for a record fifth Tour victory to secure Thomas the top step of the podium on Sunday in Paris, Froome said "yes."

Carcassonne-Bagnéres de Luchon (218km) By William Fotheringham's Stage Guide: After the second day of rest The last week begins with a long run to the Pyrenees and three short steep climbs, the last, the Col du Portillon, just 10 km from the finish. The winner should come from the early escape – a climber like David Gaudu or Pello Bilbao – while the elite group of overall contenders tends to watch and wait for tomorrow.