Trump says he was unarmed to stop the school shooting 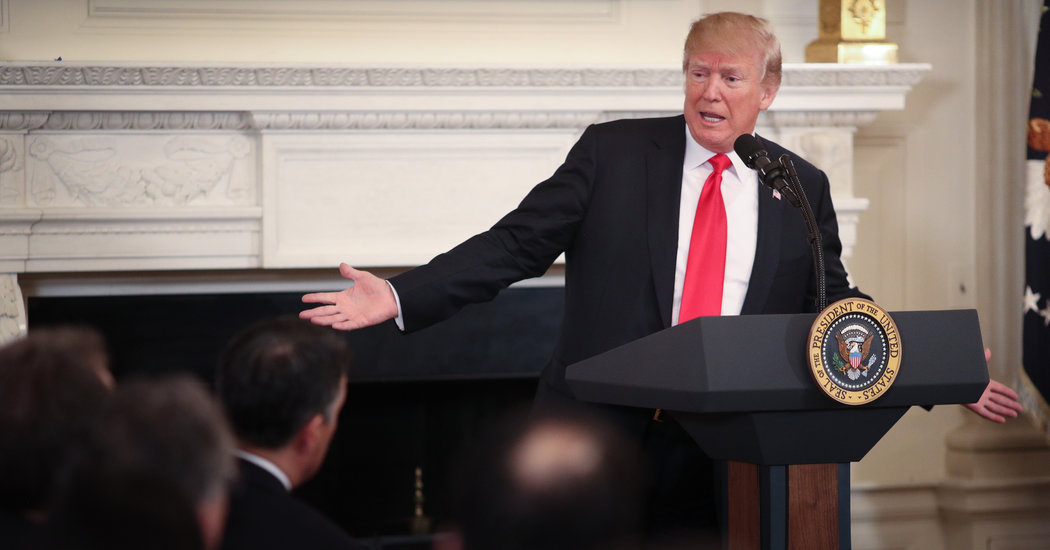 But the President continued his daylong verbal assault on the Florida sheriffs, calling her failed response to the Parkland massacre, which killed 17 coworkers and students, "disgusting" and "a shame." He said MPs "are not exactly Medal of Honor winners, all right."

A lawyer from Assistant Scot Peterson of the Broward County Sheriff's Office said Monday in a statement that Mr. Peterson was not in The shooting started because he thought the shots came from the outside. Mr. Peterson retired on Thursday after Sheriff Scott Israel branded him a "coward" for not running into the building to rescue students.

Mr. Trump repeated this feeling, saying that the performance of Mr. Peterson and three other MPs whose actions were questioned was "frankly disgusting".

He later added that "the way they occurred was really a shame." When the legislature returned to Washington after a week's break, the president used the White House forum on Monday to insist that politicians quickly take action to prevent shootouts like the ones in Florida from ever happening again. Trump once again said that he supports a bill to reinforce the system of background checks made during some arms purchases. The legislation is backed by senator John Cornyn of Texas Senate Republican No. 2 Senator, who said he would proceed with his background check bill this week.

But the two leading Republicans in Congress spokesman Paul D. Ryan of Wisconsin and Senator Mitch McConnell of Kentucky, the majority leaders, have largely remained silent about the broader debate over possible changes to the gun laws after the Florida shooting.

And the policy of arms for the Republicans continues to be difficult. Georgia's First Lieutenant Casey Cagle, a conservative Republican, said on Monday that he would block any tax relief for his state's largest employer, Delta Air Lines, if the company did not offer discounts to N.R.A. Members who were suspended after filming.

But Mr. Trump tried to take the lead.

"We have to act, we have nothing to do," Trump complained. "One week goes by" Let us continue talking. "Another week goes by, we keep talking, two months pass – all of a sudden the next topic, then, when it happens again, everyone is angry and" Let's start talking again. We need to stop. "

Mr. Trump said this was his message during his Sunday lunch with Wayne LaPierre, head of the NRA, and Chris W. Cox, the group's top lobbyist, calling the couple" big Patriots "and" great people "who are quick to" do something "to prevent further school shootings.

" Do not worry about the NRA They are on our side, "the president told the governors," you people – half of you are so afraid of the N.R.A. There is nothing to fear. And you know what? If they are not with you, we have to fight them from time to time. That's fine.

But even as he reproached his predecessors in Washington for their delays and inaction, Mr. Trump's preferred solution on Monday remained unclear as he continued what the government officials described as the "listening" phase of the reaction.

"We Still listening and making the best moves forward, "said Sarah Huckabee Sanders, White House spokesman, to reporters after the presidential meeting with the governors on Monday morning.Trump lamented a time in history when he said that mentally unstable immigrants could be admitted to a mental institution if they behaved like an "exploding cauldron."

"You could fool somebody like that," Mr. Trump said of the missing person from Florida, Nikolas Cruz, and mentioned the many warning signs that had alarmed Mr. Cruz. "You can not arrest him, I think, because he did not do anything But he said that too many of the governors in the room had closed the psychiatric institutions, which could often have been a solution to this problem because they were so expensive.

"We have no means, we have nothing between a jail and let him in his house, which we can not do anymore," Trump told the governors. "So I think you have to think about it."

Governor Jay Inslee of Washington State appeared to disturb Mr. Trump during a bitter exchange on the President's proposal to protect students by allowing trained teachers to carry hidden weapons in schools.

"It would only be a very small group of people who are very weapons masters," Mr. Trump told the governor.

Mr. Inslee replied that it was wrong to give arms to a number of teachers, trainers or administrators in the schools, and he urged the president to give up the idea.

"I've been listening to first-graders who do not want to" pimp first-rate teachers, "Mr. Inslee said as the President frowned and crossed his arms over his chest." I suggest we need a little less tweeting and listen a little bit more. And let's just take it off the table and move forward.

Mr. Trump did not acknowledge the criticism and quickly responded to comments made by Governor Greg Abbott of Texas, a Republican.

In a separate meeting with the governors' spouses, the First Lady, Melania Trump, gave short Comments that were also touched on shooting at Florida High School praised the school's students who demanded action from politicians.

"I was encouraged to see children in this country using their voices to do something say and try to bring about change, "said Mrs. Trump." They are our future and they deserve a voice. "

Ms. Sanders later said that the president also supported the protesting students, even though he rejected the ban on offensive weapons that many of them had demanded.

"That's why he had quite a few of them here in the White House last week," said Ms. Sanders. "It is very important and should be heard, we want to continue this dialogue and continue talks with state, local and federal officials."

The governors were impressed with Mr. Trump's determination to tackle the problem, said Governor Brian Sandoval from Nevada, a Republican

Mr. Sandoval added that he cited the state that had endured the most lethal mass shooting in American history last year that the governors shared the urgency. "There is agreement that something needs to be done."

But there was no consensus on Mr. Trump's idea of ​​arming trained teachers or other school staff. "I have three children," said Governor Steve Bullock from Montana, a Democrat and vice chairman of the association. "I do not want my teachers to be armed, I do not think most Americans do that."