Trump's speech in Pittsburgh was a paid tribute to the public 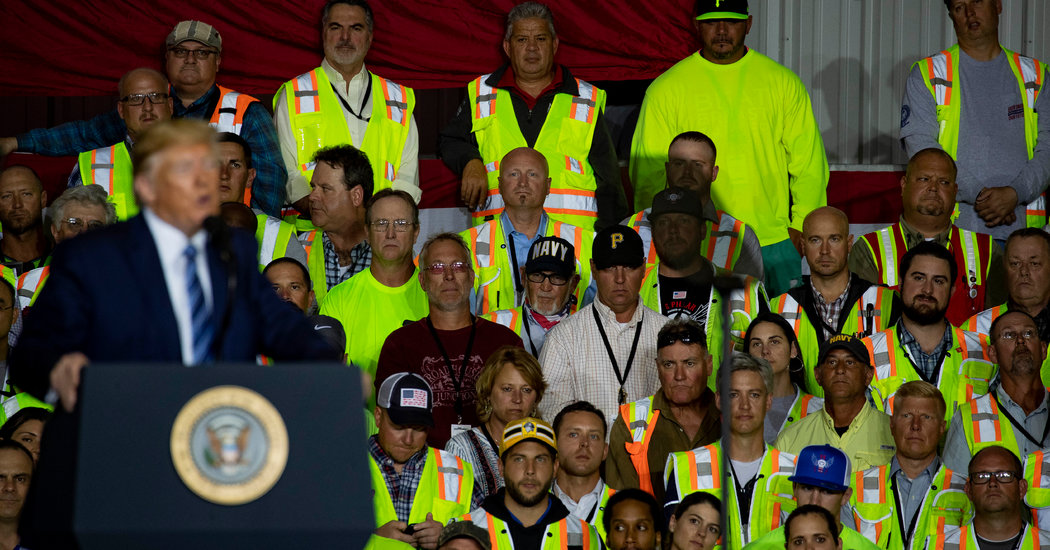 Thousands of union workers in a billion-dollar petrochemical plant outside of Pittsburgh were given the choice to attend a speech by President Trump or stay away – and lose part of their weekly wage.

"Their presence is not mandatory," wrote one of the contractors in rules for the speech that was shared with his staff, according to The Pittsburgh Post-Gazette, which first reported the matter. But the rules said that only those who arrived at 7am had their work cards scanned and then wait several hours for the president to be paid for the time.

"NO SCAN, NO PAY," a supervisor for The contractor wrote, according to the newspaper.

The President's appearance at the Royal Dutch Shell plant in Beaver County, where natural gas is being converted into plastic for a wide range of products, was released as a speech about energy, but it was hard to make it from a standard campaign rally to distinguish. Mr. Trump repeatedly targeted rivals and expressed his political grievances.

At some point, Mr. Trump said he would speak with some union leaders representing the assembled workers about supporting his re-election. "And if not," Mr. Trump said to the workers, "pick them out because they do not do their job."

Ray Fisher, a spokesman for Shell, said in an e-mail to the Times that workers who did not appear to have been paid for their workweek, but not as much as those who worked all day scanned and remained on site.

The day "was treated as a training (work) day with a guest speaker who happened to be the president," Fisher said in the email.

"We do this several times a year with different speakers," he said, adding that there was a morning session before the speech, which began at 7am and lasted three hours. It "included safety training and other work-related activities," said Mr. Fisher.

"It was assumed that some people rejected the President's visit and were given the option to take paid leisure time," he wrote instead. "As with any work week, when someone chooses PTO," he said, referring to paid time off, "they are not eligible to receive the maximum overtime available." "Anything that is seen as resisting Mr. Trump" would not be tolerated at the event, which, as the workers said, should encourage "goodwill" among construction unions.

The decision was taken by some with approval union leaders.

"This is exactly what Shell wanted to do and we went with it," said Ken Broadbent, Business Manager at Steamfitters Local 449, opposite The Post-Gazette. He said that the workers respected the presidency and that people chose not to show up.

A White House spokesman did not respond to an email asking for comments.