قالب وردپرس درنا توس
Breaking News
Home / US / Trump's spokesman is AWOL and his message is … messed up.

Trump's spokesman is AWOL and his message is … messed up. 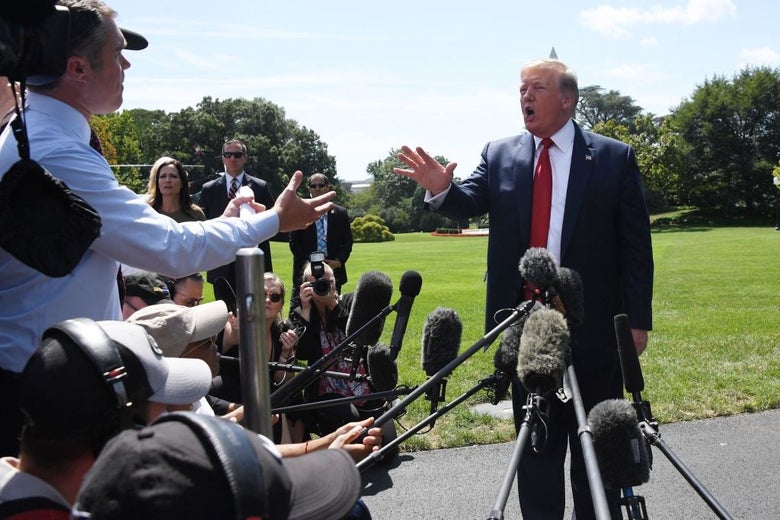 This is not the only point where the administration is creating political confusion. Following mass shootings in El Paso, Texas, and Dayton, Ohio, Trump announced that he would support laws that expand the type of weapons purchases that are subject to background controls. On Tuesday, the Atlantic quoted a source from the White House who said Trump had changed his mind and would not do any background checks. On Wednesday, Trump told reporters in the White House that he was actually hoping to pass background checks.

Typically, the person is in a presidential administration responsible for handling conflicting reports and uniting the views of various White House officials in a single, unified public message, the press officer who does so through regular briefings. But Trump's White House has not held a press conference since March 11, when Sarah Sanders was spokeswoman.

Sanders was replaced and replaced by Stephanie Grisham, the former press spokeswoman for the First Lady. Grisham says she does not have to hold briefings because the president is so accessible to the reporters themselves. Instead, she once responded to reporters' questions on specific topics. This could be a sensible approach, except that the President, as outlined above, does not seem to know his own positions properly. Nor does Grisham: The spokesman told Axios that the idea that Trump would order Israel to exclude representatives Ilhan Omar and Rashida Tlaib from visiting the country was "a false news", except that Trump literally instructs Israel, Omar and Rashida Tlaib to ban Tlaib from visiting the country in a subsequent tweet .

Apparently her boss does not care what she does or says, you can hardly blame Grisham for being mostly calm and out of sight. And their marginalized status speaks (ha!) For a more complete truth about the current state of administration: it is even less organized than it was in Trump's previous term, when it was still very disorganized by modern standards.

Trump previously had consultants such as Reince Priebus, John Kelly, and Steve Bannon, who – despite all their other shortcomings – had experience managing organizations and pursuing political projects. He had also left Cabinet members such as Rex Tillerson, Jeff Sessions, H.R. McMaster, James Mattis, and most recently the director of National Intelligence, Dan Coats, who, in spite of all their other mistakes, were prepared to withstand his demands for more Bonkers. All of these individuals have been replaced or are being replaced by less skilled, more sycophantic individuals (a process that is very slow under Trump).

The current chief of staff is Mick Mulvaney, whose influence seems limited. According to Nexis, his name appeared more than 400 times less frequently in the New York Times and the Washington Post during the first six months of his tenure than Priebus. (The culmination of Mulvaney's summer from a media perspective was when Trump annoyed him saying he should leave the Oval Office for coughing while ABC's George Stephanopoulos turned a segment.) Trump continues to advise his daughter on a lifestyle – The brand's executive, who allegedly called him "Papa" during an official appearance on Monday – the White House claims she just said "dad" – and her husband, whose prior experience the heir included his father's real estate business. (Thanks, dad / dad!)

The adviser, most prominently involved in two of the key issues currently on Trump's agenda – the trade dispute with China and the statistical signs that a recession is imminent – is the director of the National Economic Council, Larry Kudlow , a The notoriously inaccurate cable TV expert who most recently defended the idea that America should buy Greenland.

There is really only one White House official who appears to be both administratively competent and intellectually capable of creating a reality-based agenda whose goals go beyond the president's everyday whims and complaints: Stephen Miller, responsible for immigration policy , On this issue, one of the most recent activities of the White House is a bill that states that "safe and hygienic conditions" for undocumented children should not be accompanied by the dispensing of soap or toothpaste, and the announcement of a program to punish legal immigrants for using public services and on Wednesday, a request to a federal judge to be allowed to detain asylum-seeking migrant families in border areas indefinitely.

(I've asked the White House Press Office to comment on how often Grisham talks to the President, and I'll update this post if anyone answers.)

Readers like you make our work possible. Help us continue to deliver reports, comments and critiques that you will not find anywhere else. Join Slate Plus.