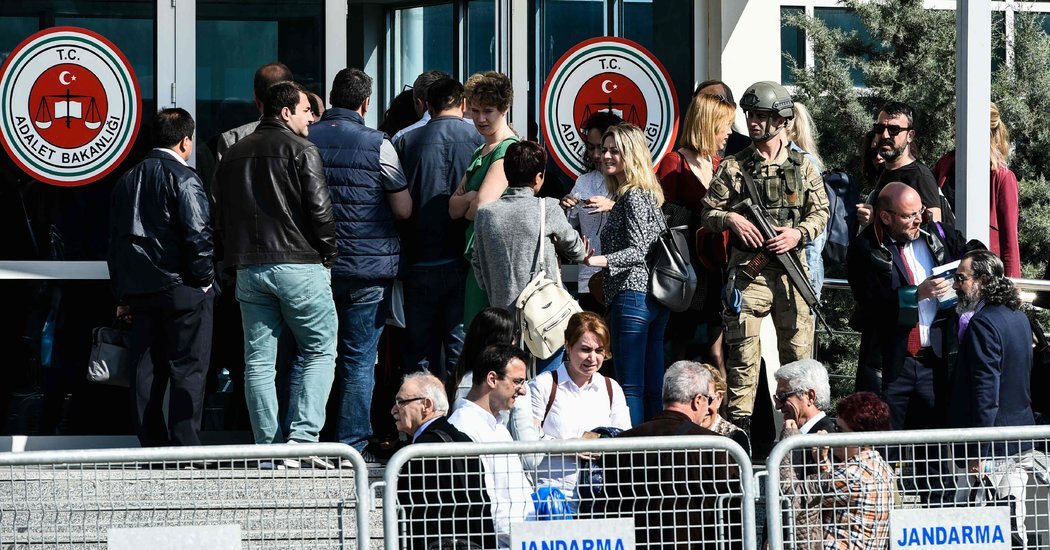 "I see this as an attack on us and against the entire community of journalists, against all our colleagues, so that we do not practice journalism in Turkey and are scared," added Sabuncu. "We may go to jail again if necessary, and we will continue to be journalistically brave."

The defendants convicted on Wednesday were part of a larger group of 18 people. Three were acquitted and the cases of two others – as well as two unrelated to the newspaper – continue

The case against Cumhuriyet began in 2016 as part of the government's widespread crackdown on dissenting opinions failed coup in July of the same year. Twelve of the group were arrested on October 31, 2016 in early morning police raids.

The defendants have been charged with supporting various terrorist organizations, including the Movement of an Islamist cleric accused by the Turkish government of fomenting the failed coup of 2016 in exile in the United States; the Kurdish separatist movement; the Kurdish workers' party; and an extreme left party, known as DHKP-C.

Prosecutors accused members of the group of helping terrorist organizations through telephone and Internet contacts, and in some cases through an encrypted phone application called ByLock. The executives and board members were also accused of changing the editorial direction of the newspaper to support the groups.

The prosecutors had demanded long prison sentences for all defendants from seven years to 43 years.

The defendants and management of Cumhuriyet rejected all allegations and accused the government of President Recep Tayyip Erdogan of organizing a political process to silence his critics.

Some of the journalists defended themselves against the allegations and offered examples of their work, to show them had criticized the same organizations they were accused of supporting.

Mr. Atalay has been in detention for more than 17 months, including months of pre-trial detention. Mr Sabuncu, the editor-in-chief, and the others were released at various stages during the trial, which began last July.

Her lengthy pre-trial detention – the prosecution took nine months to file an indictment – and the lack of convincing evidence The prosecution led to allegations by journalists, their lawyers, and press freedom organizations that the trial was politically motivated.

In a statement before the verdict was announced, the International Press Institute in Vienna said Cumhuriyet and his journalists were persecuted for having critically reported the activities of the Turkish government and the ruling Justice and Development Party.

"The prosecution has not provided any concrete evidence of allegations of links with terrorist organizations," said Caroline Stockford, the press agency's coordinator for Turkey's statement. "Anything but a total acquittal and compensation for the defendants for violating their rights will be total injustice."

In their statements on Wednesday, the defendants expressed their determination to continue their work as journalists. [19659015] "We, Cumhuriyet, will never give up resisting evil, which is the cause of our existence," Atalay said.

Kadri Gursel, a senior columnist and Advisor to the Board of the newspaper, said, "We were arrested because we are journalists and journalists, and we will continue to practice our profession, no matter how hard it is in the absence of law and justice. "

Musa Kart, cartoonist of the newspaper, said:" With this trial months have been stolen from our lives, but they can not steal our hopes for a better future for our country. "

Currently in Turkey about 160 journalists behind bars, most of whom were arrested in a government crackdown that shut down 170 news media after the 2016 coup.